See what Fiorentina means to Little Italy in the Bronx

Fiorentina will see you Wednesday at Red Bull Arena

Share All sharing options for: See what Fiorentina means to Little Italy in the Bronx

Yesterday I witnessed a genuine feel good story. You know the story by now. Boy leaves Calabria at the age of four and immigrates with his family to the Bronx. This article skips what happened between the Bronx decades ago when he grew up on Arthur Avenue until now, when he triumphantly returned with his pride and joy, ACF Fiorentina. It focuses on how one man’s success has brought many people together that otherwise wouldn’t have been.

Rocco could be seen greeting everyone with a very firm two handed handshake or the customary kiss on each cheek. It’s Rocco’s day, but in true Rocco Commisso fashion, he ends up sharing it by honoring local restaurant Mario’s for its 100 years of being in business. How tied in to this neighborhood in the Bronx is Rocco? He tells us while addressing the 800-1,000 people in attendance that it was at Mario’s Restaurant that he had his wife’s college graduation dinner many years ago.

Rocco’s romantic side was evident throughout the rally. We heard the importance Rocco placed on instilling his own culture at Fiorentina by bringing his team to his home in the Bronx. Rocco told us, “Last night we were in Charlotte. We came to New York and the first thing we did was stop at Columbia University, which is one of the schools that gave me my big break and it is the reason why I am here today.” The second happened when he asked the crowd “Where is Simeone?” Rocco then unfolds a white jersey that had belonged to Gio in his game against Guadalajara and continues “First we have the shirt that he scored the first goal under my tenure of Fiorentina”. The crowd then erupts as he and Joe Barone hold up the first “trophy” of his investment (we all hope the first of many).

For a day the Bronx belonged to Fiorentina. The local community and Viola Club of New York did a great job promoting the event. The neighboring restaurants and stores had their employees dressed in Fiorentina purple, many with shirts that said “NY Loves ACF Fiorentina”. The storefronts were covered with ACF Fiorentina pep rally posters. The neighborhood 20 minutes prior to the team arriving was a sea of viola. As you looked down the street a beautifully customized Fiorentina bus approached. Wrapped all in purple, it had images of the famous Cattedrale di Santa Maria del Fiore and Ponte Vecchio as well as the now iconic Firenze skyline choreography in the Curva Fiesole.

Players unloaded from the bus as La Canzone Viola played in the background. Joe Barone was first, followed by Vincenzo Montella, his staff and then the players. Welcomed by roaring applause and occasional player shout outs, Fiorentina players joined Commisso and his family at the stage. It was then that whispers of “Where is Chiesa?”, “Do you see Chiesa?” could be heard. Yes, Chiesa was there.

Players filled in the front, many listened intently to what Rocco said. Of course Rocco can carry any audience he is in front of, but that is a lot easier when you have the likes of Vincenzo Montella and Mr. Fiorentina himself, Giancarlo Antognoni, as your very own hype men. Giancarlo was easily the crowd favorite, drawing the loudest applause and a “Giancarlo” chant for leading Italy to win the 1982 World Cup. After Giancarlo’s short speech Rocco leans in and asks the crowd “Do you remember the big feast we had right here in 1982? Yes, yes?” This really is his neighborhood. 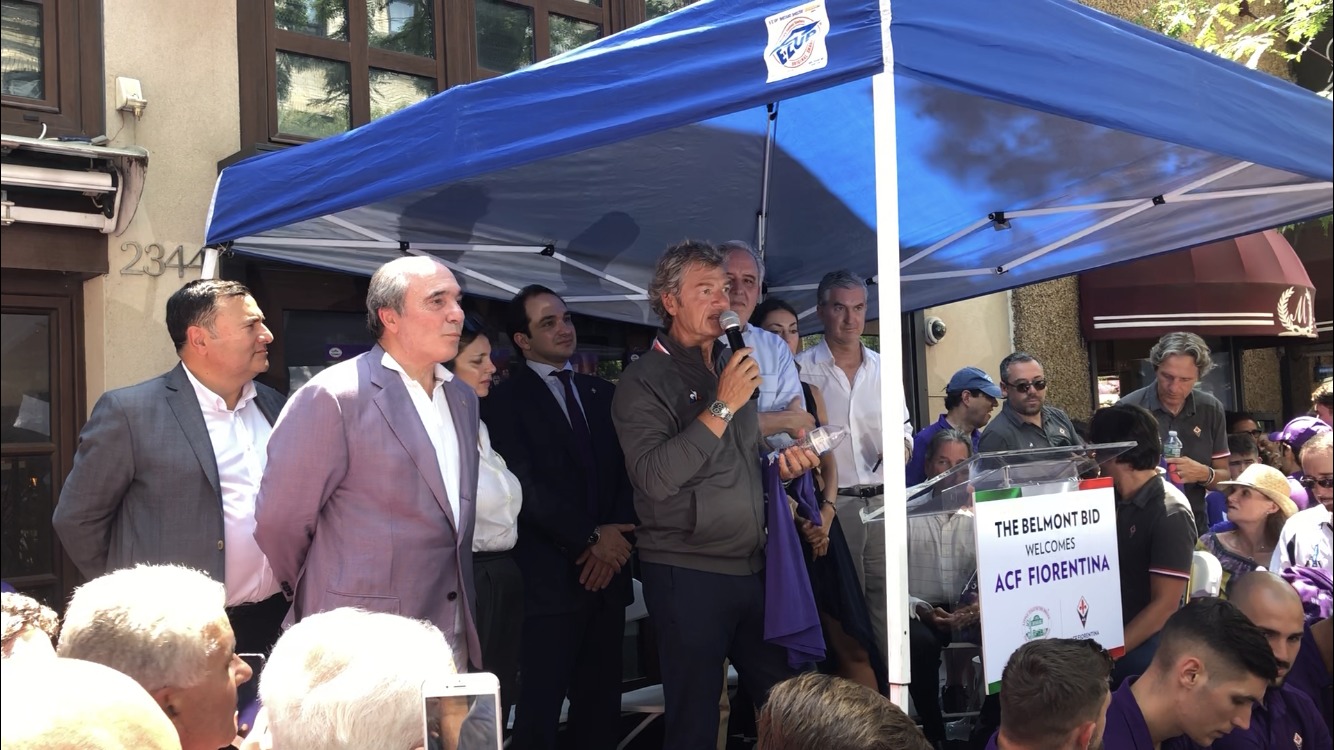 After the ceremony ended and the players dispersed, retiring to eat as a team inside a nearby neighborhood restaurant. Several of the players stayed behind to shake hands and take pictures with the Fiorentina fans and children in the audience. I would like to send my gratitude to Fiorentina stars Dusan Vlahovic and David Hancko, legend Dario Dainelli, Joe Barone and Rocco and Joseph Commisso for their willingness to indulge a father and his daughter.

There were many people at the Fiorentina Pep Rally, all with their own reason for going, and their own reasons for enduring a heat index of 110 degrees. I was fortunate enough to meet Anthony Di Muccio and his family from New City, NY before the event. Anthony was there with his father, wife and two daughters, ages 7 and 10. Anthony, who grew up not far from where we were, told me his father raised him as a Fiorentina fan. His father, who grew up in Napoli in a house full of Napoli fans, found it hard to support his favorite team. While he went to many Napoli games and cheered on the local team, his heart was always colored Viola. Anthony broke from telling his story when we heard his father yelling loudly “Forza Viola, Forza Viola, Forza Viola Rocco”. His father ran across the street hopping up and down like a school boy after he saw Rocco appear. Many years after cheering on his childhood team inside a rival stadium, Anthony’s father was now able to celebrate with his heroes and his family in his neighborhood.

It is because of his father Anthony grew up to be an avid Fiorentina fan. Now, because of Anthony, his two daughters are growing up supporting the family team. From Napoli to the Bronx, then to New City, NY, a family’s multi-generational support of Fiorentina came full circle.

I came across three men engaged deep in conversation outside of the Arthur Avenue Retail Market: Peter Catto, Alex Oliveira and Robert Papa. Their tie to Rocco was more cultural than Fiorentina fandom. Peter, who is from the Bronx, said he was there to support a local boy who is now giving back to their community. “No other owner in the Serie A has done what Rocco has done [bringing a full team to Little Italy in the Bronx], and we are all very impressed by him. That is what draws people and fans to support his club.” Alex, from Brazil, confirmed this, “It’s great that him bringing all these people together here before the game, introducing these new young players to everybody in our community.” Robert, an admitted Juve fan, again tied Rocco back to his neighborhood. “Rocco isn’t just a Bronx guy, he is an Arthur Avenue guy. I am a big soccer fan. Having Fiorentina here is good for our community and big for Italian soccer. I wish him luck in moving Fiorentina up the table.” I think there may still be hope for you, Robert. Purple is much more your color!

Finally there was my story. My wife supported me leaving the plans we had with my in-laws (renting a boat to go fishing in Margate, NJ) in order to have an experience of a lifetime with my daughter. When we got home I asked my daughter if she remembered Anthony’s story, about how his father raised him as a Fiorentina fan, and how he has now done that same thing with his daughters. She said she remembered. I told her that is what I hope for her one day.

She had an amazing time in the Bronx, taking pictures with players and staff, but it wasn’t until I asked Rocco to take a picture with her that she fully got it. Rocco graciously accepted our request for a photo. Afterwards he told his story to my daughter which, when asked to recount, she summarized as “He was just a little older than I am when he moved here at the age of 12. He loved his culture in Italy and the culture of his new home in the Bronx. He said he was so lucky to come here and it gave him lots of opportunity. Opportunity that he took advantage of.”

In the end, humility, gratitude, loyalty and hard work are why I believe Rocco brought Fiorentina to the United States. These are the characteristics with which he hopes to build this team, instilling in them his values. It is by these standards that Rocco will inspire both players and fans alike.