Montella and the men behind the scenes shuffled the purple team like a deck of cards this summer. The transfer strategy obviously designed to fill in the defensive gaps and add energy to midfield.

The transfer window was not good for the heart this summer. Prade left many souls standing on rooftops ready to jump for far too long, only to save us with lightning speed and surprising invisibility. We are now a week and change into September and it is time to look at how all of this translates.

The following is a personal tactical analysis and in no way should be taken as how things will be in Montella's head. Obviously, there is the pitch and some twisted reason I choose to confuse you guys by looking at the team as if they are facing you, so your right is their left and.... see!!

In the attached sketch, the pitch is divided into the usual positions of football players. The picking order is pretty simple; the lower your name is in a box then the lower your rank is at that position.

Viola Nation valuable contributor The Tito was kind enough to discuss this matter and all the below analysis are combined with The Tito's thoughts but first here is a quote of his take on how Montella will be going around his updated squad this season:

"I think a lot of this summer transfer window was dedicated to updating the midfield. Badelj is the Pek successor, sure, but nobody's certain what's up with Kurtic and Brillante. It looks to me like Montella is rethinking his midfield strategy. For the past two seasons, he's fielded three pure passers, which has worked pretty well against everyone except the top teams in Serie A. What those teams have in common is that they have physically powerful and energetic midfields: Pogba, Marhisio, and Vidal; or de Rossi and Nainggolan; or Inler, Behrami, Dzemaili, and Jorginho. Furthermore, as Bayern and Germany have adequately demonstrated over the last couple years, a powerful, disciplined midfield that presses the opposing midfield like crazy will frequently beat a technical, skillful, but not particularly fast or physically strong midfield. Since Fiorentina has fielded the latter type for two years and haven't had the desired success (obviously, there are some other factors), Montella is transitioning his midfield to a more physical and energetic one. Borja is undroppable, so no replacement came in for him. Badelj brings most (not all) of Pizarro's passing range, as well as a lot more positional awareness and tackling ability. Kurtic is a box-to-box runner and scrapper with some technical ability, sort of a poor man's Vidal. Heck, even Brillante is a defensive destroyer. I think Montella's plan is phase out Aquilani and Pizarro, who get overrun too easily, and bring in guys who can compete with the high-octane midfields of the top sides in Italy and Europe.

Montella's all-playmaker midfield failed, and Aquilani will probably be the first casualty to a meaner middle three."

In the goalkeeping department, Neto is the number 1 but unlike any other season, the second pick is Romania's International team goalkeeper. It is fair to rate this box as a 8.5/10

The main central defender in Fiorentina's formation is going to be Gonzalo as I believe is agreed upon unanimously. I am not well versed on Basanta and have only seen him play in the World Cup as a left back; so Savic comes next in the picking order followed by Basanta and Hegazi. Having only four players to fill a minimum of two spots every match tells me that Montella will be playing 3-5-2 very rarely. It is still possible and changing to a four back system can easily be made with one substitution. An example would be substituting the right midfielder with Micah or Tomovic and have Basanta shift to the left back position. 6.5/10

The addition of Micah Richards will surely relieve Tomovic of most of his work. Despite the fact that Richards' is yet to be evaluated in Serie A, this position has surely been strengthened more than any other. 7/10

The left back position looks weak on paper and could be given a 4/10 but it is the position where the biggest mental boost has happened. Alonso performed well out on loan and is back with something to prove. Pasqual has reignited fire from the international call up and performance. Also most importantly, Basanta can be used on this side in special situations as a defensive power house for a left back. 7/10

Badelj adds the general versatility of giving Montella the chance to play a defensive midfielder, Pizarro and Aquilani could fill that position but with much poorer defensive qualities and only in possession based formations and styles. Montella could as well be transitioning his style to a more energetic and stronger one in the midfield moving away from the beautiful Fiorentina football style as The Tito describes in his analysis but the variable suggest that Badelj could be the 10 times better Migliaccio; Fiorentina could finally have the luxury of closing out matches after entertaining and scoring a goal or two without any heart attacks. 8.5/10

The central midfield is owned and made for and only for Valero. Who to be paired with Valero in front of the deeper player remains the big question on all of our minds. The Tito's take is so accurate and is probably the case and I 100% agree that Montella will retain his style with a slight update. Imagine the same Fiorentina style but with less counter attacks turning into goal scoring opportunities for the opposition. Aquilani and Kurtic are the most probable pairing choices but I would like to see Pizarro play next to Valero in the middle without having to worry about covering the defense. Do you remember those dribbles into the box? Or those goal assists he made when he was well in front of his usual position? 8/10

The right and left midfield positions are just other names for right winger and left winger when Montella is involved. Cuadrado has the ability to own that wing whichever one it is and Montella has the back up in Joaquin and Marin to keep things strong in the attack throughout the match. The left side is a bit weaker with Vargas, Pasqual and Alonso. For the left side of Fiorentina's formation I could not say it any better than The Tito did: "Ilicic remains enigmatic, Marin is an unknown, Joaquin's on the wrong side and Vargas can't run". Right midfield and right wing 8/10. Left midfield and left wing 6.5/10

Central attacking midfield is a position rarely used in Fiorentina's game plan and with Rossi performing better as a striker, Fernandez deeper in the midfield and Marin still an unknown factor. I will keep this position unrated due to incomplete information from Montella!

Rossi's injury leaves the forward position a concern. A healthy Gomez should be sufficient. His replacements, Babacar and Bernardeschi are risky bets when speaking or discussing Serie A. El Hamdaoui was brought back to replace Rossi but his inconsistency may bring nothing to the attack. Lowest score goes here, only because nothing is proven yet, not even Gomez 6/10 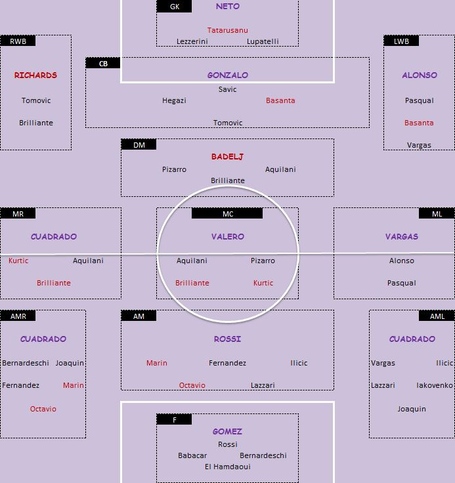