Needing a win badly, Fiorentina come through with a 2-0 win over Atalanta at the Franchi

Winless in three matches, facing a lot of angst from the fans and still not looking entirely on top of their game for long stretches of the match, newcomers Josep Ilicic and Rafal Wolski each scored to lead Fiorentina to a 2-0 win, keeping pace with the team from Naples, who beat Milan 3-1.

Vincenzo Montella once again had to shuffle his lineup as Gonzalo Rodriguez was held out at the last minute due to fatigue. He moved Stefan Savic to the central position of a three man back line in front of Norberto Neto and brought in Marvin Compper to play the left. On loan Mobido Diakite slotted in on the right.

With Alberto Aquilani still dinged up, Anderson was put in just to the right of far left midfielder Juan Cuadrado, while Juan Vargas and Borja Valero lined up to the left of central midfielder David Pizarro. Ilicic played just behind lone forward Alessandro Matri.

The lineup seemed to work well in the beginning, as the first four shots belonged to the home team and it only took 15 minutes before Cuadrado was dragged down close to the box and Ilicic stepped up to the free kick and buried it in the corner.

The goal seemed to wake up the visitors however and Atalanta started to press harder and Neto was called on to make a save and dart out to kick a ball out of the box at the half hour mark. Atalanta cried high boot as the attacker tried to embellish the contact, but Neto clearly got all ball and the official rightly, in my opinion, ignored the protests.

The call seemed to infuriate the visitors and they pressed harder and harder as Fiorentina seemed to be back on their heels a bit. As halftime came, Fiorentina got two more chances, a miss from Matri and a shot from Ilicic that just nipped wide.

Halftime didn't seem to do anything for Fiorentina, however, in fact they seemed to come out of the locker room in a daze and Atalanta came at them for nearly 15 minutes before Montella made his first move, bringing in Matias Fernandez for Anderson, then Wolski for Ilicic and finally Ryder Matos for Matri.

Shortly after the third sub, Atalanta went down to ten men on a second yellow.

Fiorentina wasted no time as they broke away on a counter and young Wolsi made a fine play to net his first Viola goal and ice the match.

The only down side to the match was a yellow card for Borja Valero, who will miss the Inter match next weekend.

“Compliments to Atalanta, they made life extremely difficult for us tonight. We had more chances but didn’t make the most of them, at times we were too stretched out, so the performance doesn’t entirely satisfy me.”

“Gonzalo Rodriguez wasn’t in great shape, so I choose not to risk him and rested some other players who needed it.”

“He(Ilicic) hasn’t played much this season with the injuries and he’s someone who needs to play consistently. Today, He worked hard for the team and has talent, so he’s worth waiting for." 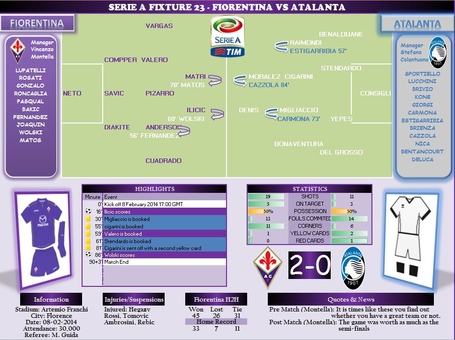 The return leg of the Coppa Italia, a visit from Udinese and a chance to make the final and qualify for next year's Europa Leage is all on the line Tuesday. Gonzalo Rodriguez is expected back, according to Daniele Prade and one would expect a return for Manuel Pasqual and perhaps Joaquin, as well. All three sat on the bench and should be rested.

Following the Coppa match is a very important Serie A visit from Inter, and Fiorentina will have to make do without Borja Valero.

Following the weekend match up will be a return to Europa League play.