Six players were sent away while Four were brought in to take part in Fiorentina's three fronts battles.

To Matos or Not To Ryder

Similar to the summer Mercato, Fiorentina suits took little time to get started and brought in Alessandro Matri on loan from Milan to cover for Italian League top goalscorer Giuseppe Rossi absence after he suffered another knee injury. Matri needed 45 minutes against struggling Catania to score twice as much as he scored in 15 appearances at AC Milan. 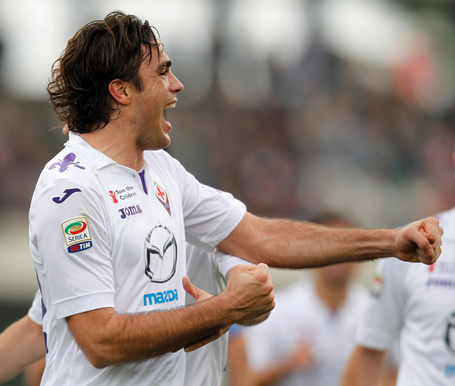 In the goalkeeping department, Munua and the club have reached a mutual agreement that nullified the player's contract and went on to join home country club Nacional Montevideo on a free transfer. Antonio Rosati was brought in as a replacement on loan from Napoli.

If you ask me, i would say that there is no better candidate to be submitted into Viola's skills Rehabilitation Center other than Brazilian Midfielder Anderson from Manchester United. While it takes time for Neutella magic to kick in like it did for Juan Vargas. Against Udinese, in Coppa Italia SemiFinals Montella had enough faith to substitute him in for Borja Valero. The question remains; Is he worthy enough to exercise the buyout option at the end of the season? 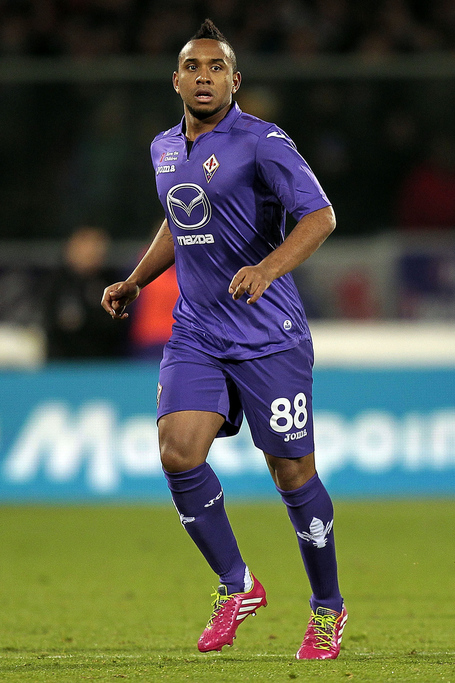 Left for Right... or is it a Montella Tryout

Fiorentina swapped left Fullback Marcos Alonso with Centerback Modibo Diakite with Sunderland. Both on loan deals until the summer of 2014. Diakite made his debut in the losing Coppa Italia first leg match against Udinese at the Friuli with a better performance than expected in place of Injured Nenand Tomovic and out of favor Roncaglia. The return of Tomovic could see the purple defense become better than ever with Gonzalo Rodriguez paired with Diakite in the center.

Other winter transfers were for youngsters who needed match experience and so were dispatched on loans. Oleksandr Iakovenko was loaned to La Liga outfit Malaga. Maxwell Acosty was loaned to Serie B team Carpi. Matias Vecino could not miss homeboy Fernandez as he debuted for Cagliari against Fiorentina after a loan deal keeping him with Cellino til the end of the season.

Was He a Good Luck Charm?

No one dares to say yes!! but since his departure to Brescia of Serie B, Fiorentina lost two matches in a row. His only appearance this season was in a 2-0 win against AC Milan at San Siro. Ruben Olivera is gone and this is probably the last time you hear about him.... well.... unless Brescia somehow return to Serie A and he pulls a Rinaudu on Valero.

I hope this satisfies the stats craze within some people. I am taking this magazine very far adding feature whenever possible. I am looking to add a feature where someone from the Nation writes a piece about one of the current Fiorentina squad players and how they ended up in the roster. 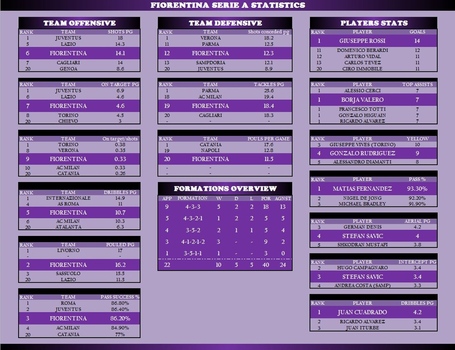 I would like to say that i appreciate this opportunity and will work hard to deliver. Regarding Fiorentina's recent struggle, i must say that this is pretty normal. Injury crisis caused bigger teams (Inter) to drop too low in the league. This Fiorentina at 41 points after round 22 is the best in the last 10 years where 3 point per win count and 20 teams play in Serie A instead of 18. This Fiorentina is the best in the last 10 years in every aspect except for goal conceding average which is something to be proud of. I am not asking any of you not to complain or fickle. As a die hard fan of Fiorentina for almost 20 years, i ask you to believe and support the management of the club and players to get through the next couple of months successfully. The project is proving its worth and we are, somehow, part of it.