Unable to pass, unable to dribble, unable to get a break from the refs, unable to do the simplest things that seemed so effortless early in the season, unable to defend, Fiorentina lose again. 2-1

I don't want to watch this, dont' want to write this, don't even really want to think about Fiorentina right now, so I'm turning it off at halftime and getting on with my life.

I just have a few thoughts from the first half. Diakite looked ok, Vargas' shot was amazing, but the rest of his play was crap, as was just about the rest of the team.

Once again the team looked to pass back, even on fast breaks. Couldn't defend to save their lives, just lucky it wasn't 5 to 1.

All that being said, it was horrible weather, which played into Udinese's hands and was clearly detrimental to Fiorentina's style of play.

Also, it's a two leg affair and Fiorentina have the away goal. It won't matter, however, unless they get out of this funk.

And it's not going to get easier. This team could quickly discover itself playing on just one front in a matter of weeks and maybe that's what they need. 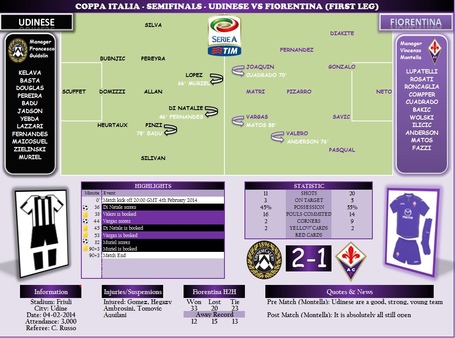