An argument could be made that two questionable offside calls against Mario Gomez cost La Viola a dominant win against Danish side Esbjerg but Fiorentina emulated a headless dragon with broken legs and weak arms from a fairy tale that will never exist. If it did, the happy ending would be dancing Danes at the Artemio Franchi!

Montella was forced to start a strong midfield including Borja Valero, Davide Pizarro and Massimo Ambrosini in order to rest unsuspended midfielders in Serie A. Gonzalo Rudriguez and Compper started the match in front of Rosati on his debute with Fiorentina. The arms of the dragon were made of Roncaglia and Ilicic on the right opposite to Pasqual and Matos on the left.

Croatian referee Strahonja blows his whistle at 20:05 GMT beginning 90 minutes of complete possession domination by Fiorentina. The first 20 minutes illustrated how an Ilicic and Roncaglia pairing on the right flank could be a recipe of disaster with poor build up and defending. Valero who apparently is more comfortable playing the ball with his ankle even when intercepting Esbjerg attacks created the perfect pass for striker Gomez who missed controlling it and showed rust all over in the first half. That attempt was followed by wide attempts from Ilicic, Compper and Gonzalo.

On the half hour mark, Gomez found himself on the edge of the box all by himself ready to record his first assist in Europa League with Fiorentina only to hear the referee's whistle on what the replays showed he was onside. Ilicic seemed to wake up, breaking counterattacks and running Esbjerg defenses with ease added to Pizarro's 2012-13 season form. The half was nearing its end when Matos sent a weak strike to the hands of the keeper similar to Ilicic's earlier in the first half. Gomez smiled at minute 45 after Valero's creative through ball was intercepted with shining eyes starting to remember how to handle such chances.

Two minutes into the second half were enough for Ambrosini to get a handball call on Esbjerg defender Drobo for Ilicic to curl it into the net. A few minutes later, Gomez was called offside again after scoring; a questionable call if not a mistake at best. At the hour mark, Montella subs Gonzalo for Tomovic and Ambrosini for Bakic thinking of Lazio fixture this weekend. Dubravka kept his team in the match by saving an amazing volley by El Capitano. Vargas was brought in for Pasqual to get in 2 crosses and a wide shot after Rosati intercepts the first dangerous Esbjerg counterattack since 80 minutes.

The last 10 minutes witnessed as many accurate shots on target as the rest of the match where Matos strike was blocked and Valero's brace saved brilliantly by Dubravka. Substitute Vestergaard had an individual effort at the end of a fast paced counter attack dribbling the ball between Compper legs and placing the ball to Rosati's right. With one minute left, Matos decided not to shoot or give away the ball after dribbling by Esbjerg defenders for the first time in 90 minutes only this time the ball is met by Bakic who sent it wide.

"It was important to give a sense of consistency to some players. We controlled the first half and the tempo was low, but after the break we raised the tempo a little for 15 minutes and scored,"

"It's a shame for that goal at the end, as it is always a pity not to get the victory when you have the chances."

"Gomez is not in any condition to play for 90 minutes usually, but the tempo was so low tonight I thought he could manage it. I kept him there because I know full well what it feels like to go without a goal for a long time and I really hoped it would arrive tonight - which it almost did!

"I saw a good response in terms of mentality from the squad. With the type of football we play, we need sharp minds and to ensure the same players don't play every three days. Now we're getting some others back we can rotate the squad more effectively."

"Juventus are certainly the strongest team in Italy. For us it is an important challenge and a very difficult one. If I could've chosen anyone from the teams in the competition, then Juve would've been the last."

"Inevitably when two teams from the same country meet at the Round of 16 it is never good, as we want all the Italian clubs to go as far as possible in the competitions.

"We picked Fiorentina in the draw, we face them with a strong desire to go forward and realise Vincenzo Montella's side are a very difficult obstacle in our path." 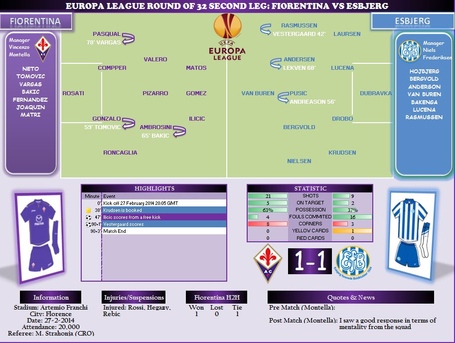 The Borja-less string of matches in Serie A begin with Lazio this weekend to be followed by Juventus, Chievo, Napoli and Milan. In Europa League, Fiorentina will face Juventus in the first leg 13th March (4 days after Juventus fixture in Serie A) at Juventus Stadium. The 2nd leg will be played at the Franchi on 20th of March after the weekend fixture against Chievo and right before Napoli. Valero should feature in both Europa league matches as he will be well rested if the 4 match ban holds against Fiorentina appeals.