This is probably the week where negative stats got pumped, positive stats reduced. For some players things got better but for others, it was all red; the bad type of red.

It is that time of the week again when we take a look and confirm, justify or discard during match judgments on Fiorentina players and the team. Also as I try to always modify my work in order to stay away from a complete boring repeat every week, the weekly overview and statistics will feature Fiorentina’s Man of the Match. In Fixture 25 in Serie A, Mati Fernandez scored a goal from a free kick putting Galliani words in doubt about Balotelli’s goal being the best in the season so far. On the other hand some could argue that Neto was man of the match against Parma with his amazing double save against a well-known finisher Amauri and Ex-Viola Cassani. I am torn between the two and they both were significant in getting that point of the match. Eventually, Neto’s performances have been exceptional lately and so Mati will have to find himself in another match with good form to get featured.

Another game with lots of possession resulted in many shots per game as Fiorentina players attempted to score on 17 different occasions. The rank is still but value has increased slightly while Juventus could not shoot as much as they are used to in the derby are still occupying first place with 17.5 shots per game

Shots on target were a whole different story as Fiorentina got only two of 17 on target and both shots resulted in goals. No changes to the ranking of Fiorentina. Juventus is on top with 6.7 shots on target per game.

I believe it was all thanks to Pizarro in addition to the usual dribbles from Cuadrado that Fiorentina were able to increase the dribbles per game stat getting very close to Lazio and Udinese while Inter remain at the top with 14.2 dribbles per game.

18 was sure a good number to have as fouls committed by Parma but in reality it could have been over 25 fouls with a different referee. Toss a coin Livorno (first in the ranking); let us see who gets what referee next week.

Fiorentina are still in third behind Juventus and Roma who lead the ranks with 86.6% pass success.

It is worth noting that Fiorentina remain the least team to have offside per game reduced to 1.4 from 1.5 since week 24.

Fiorentina improved significantly in ranking of shots conceded per game from 12th most conceding in week 23 to 14th. The team with the least conceded shots is Juventus (Roma should be talking that position after 9th of March) with 9.2 conceded shots per game.

In the tackling department, Viola still occupy last place and now tied with Cagliari at 18.3 tackles per game. It is interesting how Parma is with the most tackles at 25. Makes me question the stats collectors, are supposed fouls counted as tackles when the referee does not call them? Or are they just ignored? If it is the first answer, then now you know how Parma is first.

Fiorentina are the least team to commit fouls per game at 11.6

There is a stat that I have been overlooking accidentally during my writing but this must be noted and it could be material for many jokes to add to tally against Serie A referees. Someone would assume that fouls committed correlate positively with the number of cards received. Forgive me for making this not only about Fiorentina but also Serie A, I took an excel sheet and calculated how many yellow and red cards every team receives with relation to their average fouls per game. I always notice referees taking into account how many fouls the team players commit before giving the yellow but it looks like all that is just an excuse to.....uhm... what Slakas said. 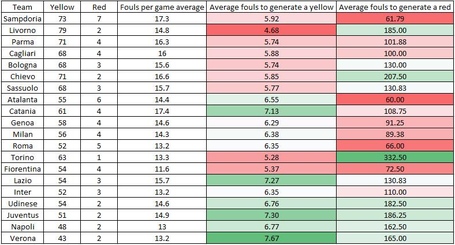 You might think that Livorno getting a card every 4.68 fouls is just not too far from Hellas getting a card every 7.67 foul, but the difference is pretty huge as this can be interpreted in percentage to say Livorno players are getting booked 40% more than Verona are. The inconsistency of Serie A referees is as clear as day. In words, the teams in red are screwed, while the teams in green are favored. Inter, Roma and Genoa represent the average of all teams at 6.4 fouls committed to get a yellow card. I don’t think red cards indicate much as it looks like most of the red cards are because of dissent or a really violent foul. Anyway, if you combine colors for each team as in red and yellow cards colors in this table, then Fiorentina is the most screwed up team by the referees along with Sampdoria. It could be as Montella said that the players need to control themselves but then again…. Look at the green teams, anyone can guess which one is the most green team after Verona?

In this section, only players who make the top 5 or worst 5 depending on the type of stat discussed will be mentioned here.

Since week 26 will be played starting March, and Giuseppe Rossi was injured on 5th of January then it is safe to say that it took 2 months for someone to catch up to his goal scoring tally of 14 goals. Tevez was able to score his 14th goal in week 25 but the number is yet to be surpassed. Neto has become one of only 18 players in Serie A to have played all 25 matches so far. Borja Valero remains in third along 4 other players in most assists in Serie A and will have to wait until week 27 to try and catch up with Romulo and Cerci with one assist ahead. Matias Fernandez remains the top of the table in pass success percentage where Davide Pizarro ties it up with 8th place moving up a rank this week. Savic improves to third in aerial duels won per game average behind Migliaccio and Luca Toni. Savic goes down a rank in interceptions per game behind Costa from Sampdoria and Antei from Sassuolo. Cuadrado is still the best dribbler in Serie A although his average reduced slightly and is less than a dribble per game ahead of Ricky Alvarez

This table shows the starting formation and its result but by no means shows if that formation was changed during the match.

Man of The Match Norbereto Neto

There is not much to talk about goalkeepers in terms of stats. The 24 year old Brazilian Goal Keeper kept his sheet clean 9 times in all Serie A this season. That is well over one third on the matches he appeared in. He holds the highest number of appearances for Fiorentina by appearing in all 25 matches starting line-ups. He is ranked third in clean sheets after De Sanctis and Buffon with 16 and 13 clean sheets respectively. Tying with him in third place are Handanovic and Mirante.

Looking forward for your comments on this article and as promised but unfortunately delayed. A special article is coming up in less than 24 hours.