Incomparable excellent Viola offense plus Neto's rebirth protected paper think Fiorentina defense through 90 minutes from the cold and rain. Vicious sharks emerged on the wet field of Blue Waters Arena in Denmark to disseminate Esbjerg defenses with two goals in 15 minutes followed by a penalty to seal the win and make the second leg match more of a formality than a real chance for a comeback for the Danes.

Cuddled in his raincoat, scarf and God only knows what else, Montella started the match with Norboreto Neto on goal covered by a four-man line defense consisting of Manuel Pasqual, Marvin Compper, Stefan Savic and Roncaglia from left to right. The young coach choose to play his best midfield keeping in mind Parma's upcoming match. He came up with Borja Valero returning from 2 consecutive matches suspension (Coppa Italia vs Udinese and Serie A vs Inter) along with Alberto Aquilani and Matias Fernandez. The team is completed by Ryder Matos, Alessandro Matri and Ilicic from left to right in attack.

Esbjerg coach who played a 4-4-1-1 formation went hand in the cold air cheering for Pusin who capitalized on a Roncaglia poor clearance to place the ball in the back of Neto's net tying up Matri's goal which was scored just over a minute earlier showcasing what a typical target man is able to do when a nice flying through ball is passed correctly by Fernandez. Niels cheering was short lived as Ilicic answered with a placed left footed curling shot through 3 players with no chance to be saved also taking advantage of a poor Drobo clearance putting La Viola back in the lead 2 goals to 1.

Fiorentina then was able to fend off continues attacks from the danish team for most of the first half. The attacks were eventually converted into one counter attack that led Matos to win a penalty that was converted by Aquilani who played one of his best matches this season.

The second half was tactically slowed down by FIorentina coach Montella who brought in Gomez, Bakic and Pizarro at different times. The highlights of the second half were a shot on goal by Gomez that was hardly saved and an Esbjerg attempt on goal saved by Neto who continues to impress and to save obvious poor defending.

"The team has never betrayed me after a defeat,"

"We went on to the field with humility, respecting our opponents and putting in a good performance, particularly in the first half.

"We could've scored a few more goals, but we were also a little too exposed. I am happy with this victory."

About Aquilani "I liked the way he played more than on other occasions, especially off the ball. He is improving."

"We must earn qualification first and only then think about Juventus, even if it would be a fascinating game," smiled Montella. 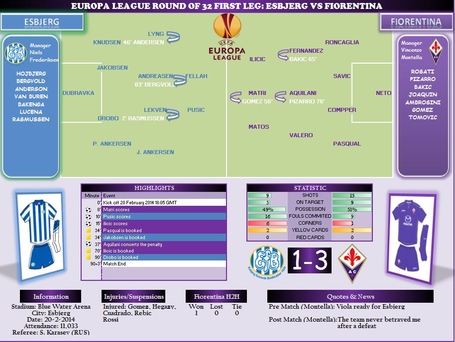 Next Monday, Fiorentina travel to Parma to wash away the first leg mistakes which resulted in a late equalizer by Parma and to wash away recent poor performances by both the team and match referees. In a week, Esbjerg will visit Florence to get this round over with and this should be where Montalla uses his rest up cards as much as possible in order to be able to handle the next bundle of matches against Lazio, Juventus (Probably three times) and Chievo to stay close or possibly reduce the 6 points margin behind Napoli. After Chievo, Viola travel to Sao Paolo grass where that match could be very crucial for Fiorentina hopes in qualifying to the Champions League.