Did I just morph into some alternate universe where Borja Valero has hair and Fiorentina play like department store manikins?

Fiorentina stayed home and sent holograms to Sardinia to go up against Cagliari today, and not surprisingly, lost 1-0 on a penalty kick rightly given by ref Paolo Mazzoleni. The decision to remain in Florence clearly announces to all that winning the Coppa Italia tie this week and next against Udinese and automatic qualification to next year's Europa League is more important that maintaining their position in the League and Champions League play.

Perhaps once the Europa League place is secured, Viola fans might get to see their team actually show up on the pitch in some sort of meaningful fashion.

I really don't know where to start. Hmm, what frustrated me the most?

It could be the fact that there were more back passes in the first half than forward passes, or at least it seemed like it.

Maybe it was Facundo Roncaglia, who might be the first player that gets a zero from me. (Please Mr Tomovic, get better real soon). Roncaglia's holograph may have had the single worst game I've ever seen from a Viola player since that guy named Felipe soiled our pitch.

And I'm not talking about the penalty kick he gave up, which was bad enough. If he made one successful pass on the day, it was probably while i had my head in my hands ripping out tufts of hair that I really can't afford to lose.

In a bid to keep Facundo from feeling bad, Stefan Savic's doppelganger decided to play nearly as bad, with the pinnacle of his suckage being a "clearance" that just missed the Viola goal by a smidge. Also, in clear solidarity with Roncaglia, were his long passes, which both of them sent straight to the goalie or out of bounds, every single time.

Not to mention David Pizarro, who looked a shadow of himself, at least until Borja Valero, the player that is clearly the Most Valuable Player on this squad, came in to give fans a slight glimmer of hope, which eventually proved to just be a cruel taunt as nothing was going to make this thing work today.

Also sending a proxy today, after getting his first hat trick last match was stumbling, bumbling Alberto Aquilano who's highlight of the match was a shot sent 25 yards wide.

Also not helping matters were the absences of newcomers Anderson and Matri. The first with more passes to the opposition and turnovers than succesful plays and the second forever offside. At first I did feel a bit sorry for Mr Matri's cartoon caricature as he was clearly very lonely out there, but then I realized he had three of his former friends around him at all times, so he probably didn't suffer too badly.

Also ineffective was the cardboard cutout of Josep Ilicic that Vincenzo Montella stood up out on the pitch today. Unable to pass, dribble, shoot or hold the ball, he was in effect another defender for Cagliari, who already had plenty out on the field.

Juan Vargas did try real hard, but, sadly, he proved he's no Manuel Pasqual when it comes to defending )how pathetic is THAT statement) and really makes me wonder if sending Marcos Alonso to Sunderland was such a great idea.

Also high on the effort meter but way low on the result meter was the ghost of Matias Fernandez. Nearly Headless Nick from Hogwarts probably would have been a better choice, he really gets some snap on those headers!

All in all, but for a missed call on an elbow to Joaquin's head, the best man on the pitch today was Mazzoleni. he and his crew were spot on on nearly every call, including Facundo's stupid penalty.

Neto(4) - back to the old Neto we used to hate and be scared of. Running into defenders, punching balls, out of position, unable to make decisions. That's now two sub par games in a row. he needs to sort it out.

Roncaglia(1) - he made one header to clear a ball. His one decent play of the match. He literally had me screaming at the tv. My wife had to go into the bedroom and watch something else to get away from me. There has to be a better option.
Savic(2) - not the better option. bad passing, bad defending, bad clearing. bad, just bad.
Rodriguez(5) - Lots of lunging finally got him another yellow card, he needs to knock that crap off. He has to be on the pitch. He did have several good interventions, but the defense was a piece of crap as a unit and his score reflects that.
Vargas(4) - spent most of the day moving forward and completely forgot he was a defender. his nose could have run past him if it wasn't attached.

Aquilani(4) - did absolutely nothing for me. Blah
Pizarro(4) - got better when Valero came on, but really was a waste of space
Anderson(4) - just didn't seem like part of the squad yet

Fernandez(4) - Unable to do anything right
Ilicic(3) - horrible

subs
Valero(6) - Clearly is the most important player on the squad. Just wasn't enough
Joaquin(5.5) - brought some energy and some width to a team that had neither, but gave the ball away too easily. Did earn a corner or three.
Matos(2) - someone needs to go to Florence, find the picture that Ryder has of Montella having sex with a goat, so the the coach will stop playing this guy. He does NOTHING!

Montella(3) - had the team playing for a 0-0 tie until they gave up the goal and then played for a 1-1 tie. Followed it up with whiny comments about the officiating and half arsed excuses, which I choose not to post here out of deference to my already upset stomach. Somewhere Sinisa Mihajlovic cracked a small smile.

Mazzoleni(7) - Contrary to Montella's opinion, Mazzoleni called one of the best matches I've seen this season. He did miss the elbow to Joaquin's head and didn't blow the whistle for a head injury, but that's probably the only thing I can hold against him and I'm the biggest ref hater in the world, I think. Montella really should have just shut up. 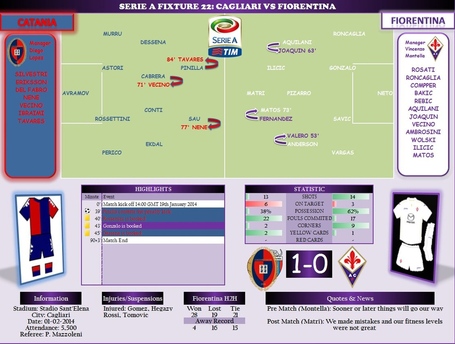 (* indicates a goal in this match- lol yeah right)

Maybe we could all pitch in and get the real team bus fare so they don't miss the next match on Tuesday.

Udinese aren't going to be easy, they won again today and have been making a run. This team is going to have to take the match seriously or it will be a worse result than today.

After that is back to the league, which may feature the Primavera team, and then the Coppa return leg