My brain's been battered, splattered all over .... Idaho

Share All sharing options for: Inter 2-1; This Team's in Tatters, I Been Shattered...

Once again, bad officiating, fixture pileup, fatigue and injuries combined to send Fiorentina to their third loss in five Serie A matches as Inter beat Fiorentina 2-1 on a clearly offside goal. A later kick to the face on Josep Ilicic by Hernanes in the Inter goal box was ignored.

To add insult to injury, or perhaps injury to insult, Juan Cuadrado and Gonzalo Rodriguez both have muscle injuries which will likely see them miss more time and Juan Vargas suffered four broken bones in his hand.

Adding further complications were the other results of the week as Juventus, Roma,  Napoli, Inter, Parma and Milan all gained three points on la Viola. Verona and Torino play tomorrow and have the chance to gain ground.

The only bright side of the match was the return of Mario Gomez who nearly got a goal on a cross from Matri which would have tied the match.

Meanwhile the death march of fixtures continues with a mid week Europa League fixture in Denmark to play Esbjerg. The Danes are struggling mightily in their league, but have done well in European Competition and that fact, along with a bad weather forecast, could make this a tricky match up. Thursday's forecast calls for low 40F degree temperatures and a 90% chance of rain.

I only saw part of the second half and don't feel qualified to rate the players. Feel free to add your ratings

Montella(5) - poor starting lineup, never had any chance of suceeding. A patched together defensive back line and a weak forward pairing was a recipe for disaster and that's what he got. He no longer has the personnel to run his usual 3-5-2 and really needs to re-evaluate his strategy.

Damato(2) - all his fouls were called in the middle of the field, he swallows his whistle anytime anything happens anywhere near the box. His assisants missed the offside and incorrectly called another, not to mention the kick to the face right in front of the end line official. What a waste those officials are, i have yet to see one of them make any kind of meaningful call. Damato is, and alwyas has been horrible. He should be in Serie C.

"I think Inter deserved to be in front in the first half. They were quicker, more reactive and had taken the initiative."

"However, in the second half we played the better football and were able to equalise, but unfortunately Inter got that goal."

"You can also add in the bad luck we had, as Mauro Icardi’s goal was offside. We were lacking in energy after the Coppa Italia game and ahead of the Europa League fixture. As Inter will acknowledge, playing in these tournaments takes something away from you in Serie A."

"It’s a shame to lose to an offside goal. Inter have been moaning about referees for months. Should I moan as well? What should I do?

"Icardi was clearly offside and it should’ve been an easy call for the assistants to make. It really hurts to lose like this." 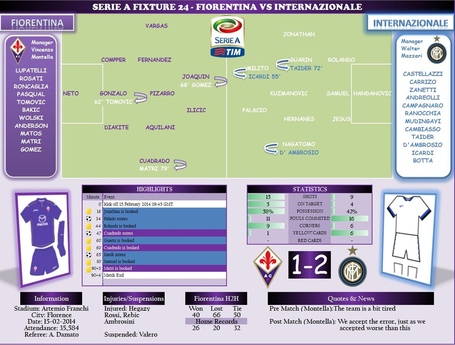 A trip to rainy Denmark, and hopefully a lineup of kids and backups as the Europa League has lost it's attraction with the qualifying of the Viola into the Coppa Italia final. The only thing gained from advacing in Europe at this time is 350k Euros and the chore of playing (and probably losing to) Juventus two more times.

After the trip up north will be another road game at Parma, who are now only 8 points behind Fiorentina. Parma earned a late match tie in the first match played in Florence on a Gobbi goal.