Giuseppe "Pepito" Rossi's dream is now all up to himself as his teammates put La Viola in the Coppa Italia Finals. Just like Heroes, started with determination, had some difficulties with their resolve until Montella puts the faith back in their hearts and re-ignites the purple fire to win the battle with El Capitano Manuel Pasqual volley and Juan Cuadrado's screamer.

Diego & Andrea Della Valle attended the match from the stands but this time without the company of Mario Gomez who was included in the match squad only a few days after he started training on the field. Montella had to yet again shuffle his team considering injuries of Rossi, Ambrosini & Tomovic and not fully fit Mario Gomez. Viola started with Neto on goal behind Fiorentina's best defense pairing of Gonzalo and Savic. On the right was new signing Modibo Diakite while on the left with the arm band Pasqual. The midfield consisted of Mati Fernandez slotting in for suspended Borja Valero due to cards accumulation along with baby steps form recovery man Pizarro. The midfield is completed by Aquilani who is returning from injury. The starting XI were headed by the attacking trident of Joaquin, Matri and Cuadrado from left to right.

None can argue the dream start to the match with complete domination of the first 15 minutes that produced a magical and probably the best goal in Coppa Italia this year when non other than our best long ball passer Pizarro sent a ball flying into the 18 yards box to find the 90 minutes Man of The Match Joaquin's head who put it on a silver plate for pasqual to smash it in the net's ceiling.

Things could not have gone worse from there; 11 Udinese players were playing against Neto, the goals right post and Mati Fernandez who had the only attempt for Fiorentina in the following 25 minutes. Hero Neto had super reflexes powers that i can personally say that i have never seen before by him. It was one of those times in a match when you are lucky enough the ball is not going into your goal but also unlucky that every clear you make is blocked by an opposing player. It was not all due to luck because there were tons of comedic moments featuring Pasqual's three headed monster, Cuadrado's tripping by his own shadow and Pizarro distributing presents to Udinese's players. The team has also stopped the usual pressing and the high defensive line which was probably a good tactical decision considering Udinese dangerous counter attacks. In my opinion, Fiorentina trying to keep possession would play into Udinese's and Guidolin's best interest to play the counter as they are used to do. It seemed like the defensive approach taken by Montella in the first half threw Udinese off balance in terms of finishing the job.

The last five minutes of the first half were not so different but the comedy stopped and the possession was re-established to result in a Joaquin strike that was saved by young Scuffet.

Following the players return from the locker rooms, Fiorentina repeated the same control they had in first half's starting 15 minutes which had Joaquin written all over it with his off the ball movements, strike on goal that was barely saved and great passing. The first change came at the 57th minute when the mister was starting to think about ending the match with this result by removing Matri for Matos. Shortly after that, Savic with what is speculated to be a hamstring injury requested to be substituted. Montella sent in Marvin Compper in place of Savic at the hour mark only to somehow with no direct cause and effect logic behind it to wake up another Hero who has been very quiet to send in a screamer with no chance to be blocked or saved giving Fiorentina a 2-0 lead and put everyone's mind at peace as any goal scored following that for Udinese will bring extra time to the match at worst.

30 minutes of Udinese control and possession versus Fiorentina's Joaquin and Cuadrado's counters lead to 6 additional minutes to the clock which witnessed a red card for Badu from Udinese's bench, a Neto save that demonstrated his superhuman abilities and another red card for Udinese Captain Domizzi. La Viola fans could do nothing but constantly chant Neto's name pinning it as a new fan favorite at the end of the match.

Massa eventually blows the whistle to send Fiorentina to their first final match since 2001 in Coppa Italia.

"It was a very difficult game and before celebrating Fiorentina's performance, I must compliment Udinese for their efforts over both legs. They caused us a lot of problems," Montella told Rai Sport.

"Having said that, over 180 minutes I feel it was a deserved win and we will enjoy it with our fans, patrons and the whole city. We hope it can become a big moment for Florence.

"We are growing a great deal, although there are some physical problems when playing so often. We saw great team spirit tonight and I'd say the desire was what allowed us to win even more than our technique."

"Mario Gomez will be there for the Final! He is recovering and was on the bench tonight, as we might've used him if needed for 5-10 minutes. It's a shame forCuadrado, but this is football."

"He has huge potential that I think still hasn't been fully expressed. It wasn't easy for him to overcome the general scepticism, as the slightest error would cause huge problems. He's very reactive and an excellent goalkeeper. I'm happy he was able to enjoy this night.

"We kept a clean sheet, contained Udinese's great talents and in my view we have already made that step up in quality. We've improved a lot over the course of the season.

"Against Udinese you must always be wary of counter-attacks, as they are very good at that. Pereyra, Di Natale and Muriel are all very fast on the ball, so I was afraid of that and it's why we went a little deeper than usual.

"Ironically Cuadrado's goal was similar to the kind Udinese have scored against us in the past."

"Perhaps reaching the Final was our primary objective at the start of the campaign. The squad, staff, club and fans deserve this opportunity and it also gives us the guarantee of at least being in the Europa League."

"I don't know! They're both very strong teams, so it doesn't matter." (Speaking of Roma and Napoli regarding the Finals

"This is a joy we deserved over the last year and a half. The city deserves the Final too and I'm happy to have scored the goal," Cuadrado told Rai Sport.

"I am also sad, as they just told me I was on a yellow card and will be suspended for the Final. Unfortunately, that's football, but I did really want to play the Final."

"We played a great game against an excellent side like Udinese. Today we sawNeto is in great shape and I am very happy for him, as when he didn't have a great start to the season he was criticised, but the fans were singing his name tonight. I hope it'll help him grow."

"I am very happy to be here with this team and am focusing on the present, which is Fiorentina." 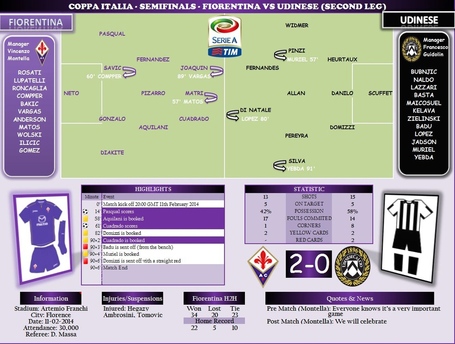 This was the best start for a 6 match run in 18 days. Next up in Inter at home and if the first half season match any indication, this should go Fiorentina's way now that Neto has become confident. Following that Fiorentina play away-home matches against Danish club Esbjerg in UEFA Europe League round of 32 with weekends against Parma away and Lazio at Home. This should conclude February 2014 only to begin the most difficult run of matches in March.

Next Saturday Fiorentina have the chance to break away further from the following pack by defeating Inter at home. It would be the best Scenario considering the touch string of matches coming up but for now..... we should really be celebrating a spot in the Coppa Finals. With this, Fiorentina have locked in a spot in UEFA Europa League regardless of their Serie A Ranking if below third assuming that Napoli/Roma stay in the top 5 of Serie A.

A few events took place since Fiorentina beat Udinese 3-2 on aggregate to qualify for Coppa Italia Finals, Here is what my humble research skills were able to find:

· Inter training session saw both Hernanes and Kovacic missing with the first expected to be out for 3 weeks while Kovacic was getting stitches on his knee. Milito and Cambiaso are still more than likely not to start the game as well. On the other hand D'Ambrosio could be getting his first start

· Domizzi in an interview... not sure what he meant by Euro-goals or a few post hits   "I was expelled because I got upset. There is little you can do against wastes of time. Some decisions made us upset because they allowed Fiorentina to waste more time. We are sorry to be eliminated due to three Euro-goals, you can't reflect upon your mistakes this way. They found the right chances while we got ours wrong. It's hard to take stock of this game. We deserved to be a bit luckier. Their goalkeeper was good, but a few times we hit the post or Totò mishit… Udinese can't be blamed today".

· Missed on TV but Juan Cuadrado dedicated his goal to Flacao.

· An interview by Widmer after the loss to Fiorentina: "It's tough to say something right now. We gave our all on the pitch, but it was useless because we didn't manage to accomplish our goal. We can walk holding our heads high, but it's really hard to comment on this loss. We are sorry for the fans who followed us here, but we really did our best to succeed, it was a very unfortunate match. Our supporters mean a lot to us, they give us the spur to do great things. We need to focus on the next match, we can't stop. If we keep playing like this, we can do great things".

· Unrelated to the Coppa or Inter's match but Romulo's agent has been quoted about speculations on buyers: ""We have heard so many rumours, but there's nothing to it."The only concrete offer came from a foreign investment fund; a proposal to do something important for the future of Romulo. Whether Monaco are behind it, I cannot tell."Romulo will return to Fiorentina in June and then we will evaluate the situation. There is a willingness on the part of all parties to find a mutually beneficial arrangement."

· Montella confesses final minutes scare in another itnerview: "You suffer more as a coach," You don’t suffer that much when you are a player, or even not at all, because you have the chance to take part to the game physically."I suffered a lot in the last minute of the game, I would hardly have accepted to let Udinese score a goal at the 96th minute of play and from a goalkeeper’s punt."We weren’t enough careful there and that was the hardest moment for me.""I saw great qualities in Neto," he added. "Obviously he still needs to grow and improve as a goalkeeper, but luckily for him and for Fiorentina there’s still a lot he can give."Sometimes life gives you immense joys, like it happened to Neto tonight, making him the star of the night in such a special night for Fiorentina and for us all, and he well deserved that."

· Rossi also made sure to voice his pride in the team: ""I’m too proud of my team-mates," "This has given me feelings of excitement. Thanks, guys."