Fiorentina starts the year with a win, three points, a clean sheet and are tied for third place in the league, and yet all Viola fans are holding their breath, waiting for news of Giuseppi Rossi, who left the field with a knee injury, and one which appears to be on the same knee he's had surgical work on.

Fiorentina formally announced: “ACF Fiorentina announce that following a challenge from Livorno player Leandro Rinaudo, Giuseppe Rossi suffered a sprain to the knee that had already been operated on. Tomorrow more tests will be performed.”

Fiorentina struggled to find a way through a largely packed back Livorno team, as the Tuscan rivals kept 9 men behind the ball for much of the match in an attempt to lessen the Viola pressure. The first half completed without much of a chance from Fiorentina and no chances from Livorno.

It wasn't until after the one hour mark that finally made the chances count, a Borja Valero corner kick found Gonzalo Rodgriuez for the lone goal.

Rossi was taken down shortly thereafter, putting a pall on the rest of the match.

Fiorentina were able to see the match off and will wait for news of their goal leader.

Neto(7) - went the whole first half without having to pay much attention, but after the Livorno plunked a shot off his crossbar and he came back with three saves to preserve another clean sheet

Roncaglia(6.5) - Couple of rough clearances, but other than that played a fine match. only had to defend on the ccounter and he was as fast as any Livorno player so, great match for him.
Rodriguez(7.5) - Being back on the score board is always good for the Bomber, but he was all over teh field on the defensive side of the ball as well.
Savic(6.5) - With Livorno packed back, didn't have a lot to do, he just had a role to fill and he played that role well

Cuadrado(5.5) - Really wasnt his night tonight. Bad passing and an inability to get onto a pass, squandered chances.
Aquilani(6.5) - Aquilani played a specific role tonight and did it fairly well. distributing the ball quickly to start the runs, get back and help out the defenders by clogging up counters
Pizarro(6.5) - Pizarro had a rough time finding the aim on his passes in the first half, but he really turned it up after half time.
Valero(6.5) - had a rough time early with his passes as well, but had the assist on the goal on a corner
Vargas(5.5) - wasn't able to do much on his side with a packed back Livorno defense. Going to need a bit more from Vargas.

Rossi(6) - Had a couple of good shots, was active in the offense, had beaten his man and was taken down from behind, Can only hope it's not too bad.
Ilicic(5) - Had a nice shot early, but it was blocked and he disappeared for long stretches of time.

Montella(6.5) - Can't really say the team was ready to play at the opening whistle, but they didn't concede, didn't give up a shot on goal and controlled much of the play. The team won another match they were supposed to win and historically hadn't. coach wil already be mulling his choices for Wednesday.

Montella:
"We are all worried about Rossi. Tomorrow there will be the usual medical tests,

"We are above all concerned for his state of mind. It’s a shame. The foul seemed intentional and the player committing it didn’t even apologize."

"You say sorry when someone commits a foul like this. There was no way Rinaudo was going to get that ball."

"Livorno played the entire game with nine men behind the ball, so there wasn't much space. Once we figured out how to approach them, we won with our mature attitude." 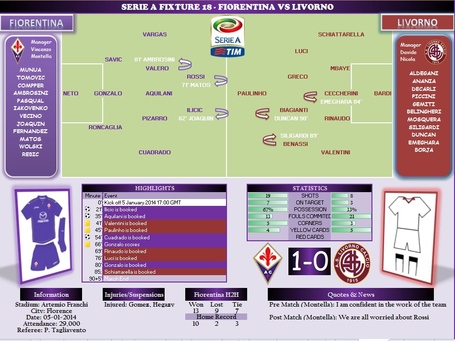 
A midweek Coppa Italia match up against Chievo is next on the list. Chievo haven't savored victory since the first week of December, when they beat Livorno and Sassuolo in Serie A and Reggina in a Coppa Italia match.
Chievo lost the next two matches, against Sampdoria and away to Torino before the break and were only able to manage a scoreless draw today at home against Cagliari, and with an away match with Inter looming next weekend, just how seriously Chievo will take it all remains to be seen as they have to travel to Milan to face Inter a few days later.


After the midweek tussle, another tough trip to Turin to face the "other" team, Torino. Torino are no pushover, they're seventh in the league and, at home at least, are quite stingy with the points. Torino have 4 wins, 4 draws and only 1 loss at home.

Once past Torino, there's four very winnable matches and a chance to rack up some points before the big Inter match.