A penalty kick on a clear dive, an offside goal and an onside Viola goal disallowed by the same linesman, yet Genoa only manage a tie, thanks to a superhuman effort and a hat trick by Alberto Aquilani.

Gifted a penalty kick on a clear dive, a goal while offside and having a Fiorentina goal disallowed for an incorrect offside call, Genoa managed to scrape out a tie as the Viola defense and Neto went to sleep on a corner and gave up the equalizer

The match was really quite enjoyable for the neutrals, as it was a fast paced, up and down match with lots of highlights and talking points. First among the talking points would be the return to glory for Aquilani as he was all over the pitch, scoring first from the penalty spot and three more times from the field, with the fourth goal being called off incorrectly for offside.

Secondly was the stumbling bumbling officiating crew that couldn't get out of the way of the match to save their souls.

Thirdly was the return to bad habits for Neto and the Viola defense as they fell asleep late in the match on a corner kick to allow Genoa to tie and steal the two points. Without that brain fart, Viola still get the 3 points.

The points lost doesn't really hurt Fiorentina in the standings as much as it was a chance lost to get within a point of Napoli as they were held as well, as Was Juve and Inter. In fact the only team in the front pack at the top table to win was AS Roma. Torina and Parma also won to pass Verona and move closer to the peloton.

Not going to rate every one for time's sake. Just a few.Feel free to add your own...

Neto(5.5) - Did make contact with the player in the box, but minimal. No chance that was ever a penalty. Never expected him to be able to stop Gila. The second goal was a laser, no chance either. 3rd goal however, he reverted back to prior bad form, failing to make a decision and winding up in between. I'm not going to call for the Lad's head, however, it was one little step back after a month and a half of great strides.

Roncaglia() -
Compper() -
Savic() -
Pasqual(5) - Should have been subbed off at the 60 min mark. The up and down style of the game wiped him out and most of the second half he was just lunging and fouling, giving up free kicks and giving up the corner that Genoa tied the match on. He was beaten and lazily stuck his leg out Vargas should have been in for the last half hour.
Aquilani(8) - four goals and head and shoulders above everyone on the pitch. Did get a bit gassed by the up and down pace of most of the match.
Pizarro(7) - Glad to see him back to form
Ambrosini() -


Montella(4) - I've got several issues with Mr Montella's choices today.
Firstly, his starting lineup. Several of us remarked on the inclusion of Ambrosini, speculating that he was there to "shore up the weak defense," but the team came out and played and up and down, end to end, playgroud style with Genoa. That is completely NOT Massimo's game. So my first beef is if you're going with a tactical lineup, you better make sure your team plays the game that goes along with it, or switch up earlier and bring in Fernandez in the first half to give your midfield the speed advantage. Not coincidently, as soon as Fernandez came in, the midfield began to possess the ball and control tempo for most the rest of the match.

Secondly, taking off Aquilani. Dood was having the game of his career, to pull him off the pitch for a player that's been with the squad for a matter of days is questionable at best, even if he were tired. That being said Anderson looked alright and may even have been another factor in the midfield finally taking over the pace of the match, but all his good deeds were basically in the middle third of the field.


Thirdly, not recognizing that Pasqual was out of gas early in the second half. The pace of this match was brutal and Pasqual is not that strong. As I said above, his lazy defending gave up the corner and the rest of the teams brain fart gave up the two points.

Fourthly this love affair with Ryder Matos. The only thing Matos brought to the match was falling over and getting a free kick. Again, I do have to say that Fior nearly scored on that free kick, but taking out Cuadrado is highly questionable. I wonder if young Ryder isn't a "practice player" ala old Oakland Raider quarterback Marc Wilson, who was an Olympian God in practice and as good as an old rusty can of Olympia Beer during the games.

Tommasi(1) - Oh lord, what I can I say? This was a bad match even when compared to the usually bad state of Italian officiating and I'm not going to just lay the blame on the on field ref. The same linesman that gave Genoa the first goal took away the fourth goal of Aquilani. If you are going to be inches generous for them then you need to make the same call the other way, otherwise your loyalties began to be in question. Also at fault is the goal line official. What is the point of these guys even being there if they are not going to help out the lead ref in this area. The goal line ref had a straight viewing line and the obvious dive and either declined to make the call or wasn't listened to. The make up penalty for la Viola was a bit light as well. Tommasi also declined to give De Maio a second yellow for what looke dto me to be an intential slap to Fernandez's face ate in the match, which would have put Genoa down a man.

"I believe matches need to be disected as a whole and you should also view other results to understand there are no easy matches in Serie A. This evening wasn't easy on paper either."

"I think we could have won if we had made more of certain chances. I saw Facundo Roncaglia’s late shot curve in a bizarre fashion, almost as if it had been remote-controlled to swerve wide. It was incredible! Maybe we are cursed!"

"I never talk about the officials, so I’ll just say mistakes can happen."

"I liked the attitude of the team, the desire to win and these are elements that will serve us very well in the future. I have to compliment them all for their efforts and hunger. I will admit the team is a little fatigued, perhaps more psychologically than physically."

"He(Anderson) has an extraordinary desire to be a star. He doesn’t have the physical sharpness he needs yet, so I’ll help him settle in gradually."

"We must focus first of all on consolidating fourth place. We did  maintain the distance from Napoli, so that’s a positive. It’s a long season." 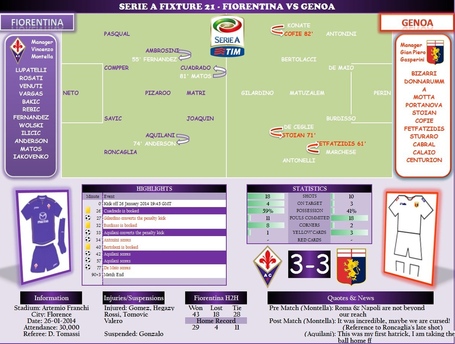 Fiorentina have scored 11 goals on Genoa over the last three Serie A matches. The teams combined for 13 goals this season.

Neto missed Fiorentina's record for league shutout time by 29 minutes. Neto had 500 minutes. Enrico Albertosi’s 529 minute run set during the 1965-66 campaign remains the longest for la Viola. Neto was only 429 minutes away from the Serie A record mark, Sebastiano Rossi’s 929 minutes for Milan between 1993 and 199.

Albeto Aquilani raised him self up to a tie with Juan Vargas for third place in the team scoring lead.