Hurricane Alessandro hit the Island of Sicily today, leaving swaths of destruction across the Catania pitch.

Fiorentina fans weren't really sure what to expect today. Some were sure the high profile player on loan from Milan would do what he's done for a few years now, disappoint. Some were cautiously optimistic, but few expected what did happen today as Alessandro Matri blew through Catania like it was a bamboo hut, scoring 2 goals and assisting on the third.

Stepping into the forward's role thanks to bad injuries to both Giuseppi Rossi and Mario Gomez, Matri played a perfect poachers game today, jumping on loose balls and deflecting balls and generally causing havoc in the box, Fiorentina fans haven't seen that kind of player since this guy Alberto Gilardino left town

Further intensifying the gale force winds of Hurricane Alessandro was Tropical Storm Mati as the young midfielder Matias Fernandez scattered opposing players as he stormed up and down the pitch, finally getting the scoring started as Matri dropped a cross from Manuel Pasqual to Mati's feet and he lashed it home.

Pasqual also crossed in the next ball that Hurricane Alessandro took hold of and placed in the back of the net, while Fernandez was also involved in the third goal, getting the original shot off that the Catania goalie blocked to no avail, as Matri was there to tap it in.

The win keep Fiorentina in fourth place, with 40 points, but they crept closer to 3rd place as Napoli were tied by Bologna and are only three points In front.

Matri was only able to get in 90 minutes as he had an issue with his calf and came out at half time. The player says he had a slight strain on his calf and it happened almost immediately at the start of the game, but he played the half with it and was removed at half time as a precaution. Hell if he plays that way with a calf strain,..

Fiorentina will get back to the comfortable home confines of Florence to get ready for a midweek Coppa Italia match with Siena and a league match with Genoa on Sunday.

Neto(7)  - 3 saves, another clean sheet and he didn't look intimidated at all when Catania players tried to crash into him and rush him.

Tomovic(6) - loooked pretty good coming forward, was playing his usual solid job before being injured right be fore the end of the half.
Rodriguez(6.5) - was a pretty easy day at the office for the defense as Catania played packed back for all but the first few minutes and the occasional counter after that.
Savic(6.5) - Par for the course, had a brialliant intervention to sweep away a chance, played a lot at midfield controlling the ball.
Pasqual(7) - Was a bit rusty early but got in a cross that ended in an goal, had an assist and looked pretty good on his passes.

Valero(6.5) - not as flashy as Matigol, as Fernandez did a bit more damage on his side, but very solid match.
Pizarro(7) - every pass was spot on in that first half, he changed pace and sides effortlessly.
Fernandez(8) - If not for Matri's headline performance, Fernandez would be my man of the match. He owned catania any time he wanted to do, running past them like they were in another gear.

Cuadrado(7) - played more of a supporting role, which is probably ok. Seems like he's got his fitness back, passes people with ease.
Matri(9) - What can you say. Dream start, 2 goals and an assist. Only thing that would have been better would have been to do it at home.Oh well, he'll get his chance next week, hopefully.
Vargas(6.5) - had a bit of a subdued match. No obvious flaws, but nothing outstanding either.

Matri:
"I went off at halftime because of a small calf problem and will need some tests tomorrow to evaluate it."

"I haven’t experienced a moment like this for quite a while and to be honest I really needed it. I wanted to be the protagonist again and after such a tough time you lose your sense of balance. Only my girlfriend and those closest to me know what it is I’ve gone through."

"The first goal was from a play that Fiorentina attempt often, while on the second I was fortunate and smart to believe in it."

"Over the last six months I struggled to settle into Milan’s tactics and there were various problems at the club. I am 29 years old and still a bit young to be on the bench."

"Why did I choose Fiorentina? They had the Number 32 free! There were other options, but this team plays an attacking style and there are many fascinating elements here."

"We've been missing someone like Alessandro Matri. We hope his injury isn't too serious, otherwise it would be ludicrous. It was an important and difficult victory." 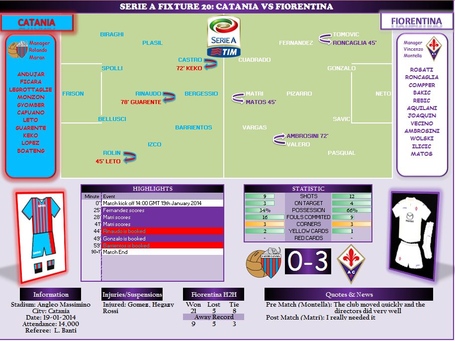 Fiorentina host 2nd division squad Siena on Thursday. Siena are 13th in Serie B with 29 points. Palermo, Empoli and Avellino lead that league with 40,39 and 37 points respectively.

Serie B have been off since December, Siena last played January 15th in the Coppa Italia. Siena beat Catania 4-1 to advance.

Back to Serie A play next sunday as Genoa comes into town. Genoa are coming in off a big home win against Inter 1-0. Genoa are in 10th place with 26 pts.

Fiorentina beat Genoa 5-2 on the road in September

Match ups involving the teams above Fiorentina that weekend are Juve at Lazio, Roma travel to Verona and Napoli host Chievo,

This was the first match of the second half of the season.

Fiorentina earned 37 points in the first half, which, if they could manage a similar effort in the second half of the season would give them 74 for the season.

74 points was good enough for a second or third place finish in every season for the last ten years, except for 08/09, where 74 points would have tied with Juventus and Milan for second place and it would have come to goal differential and both of those teams had goal differentials in the 30s.

With one half of one match played, Matri has moved up to a fourth place place tie for goal scoring lead on the team with Gonzalo, Cuadrado, Gomez and Mati Fernandez.

Fiorentina have gone without a loss in 7 straight in all competitions, the last 6 being clean sheets.

AC Milan are exactly as many points behind Fiorentina (15) as Fiorentina are behind Juventus.