Fiorentina played out an entertaining 0-0 draw away to "brother" club Torino, but the lack of a decisive striker was obvious at full time.

Share All sharing options for: Match Recap: Torino vs. Fiorentina

Fiorentina maybe deserved all three points based on their first half chances, but given everything a draw was a fair result against Giampiero Ventura's well-drilled Torino. Neto, Borja Valero, and Joaquin were the standout Viola players, while Alessio Cerci, Alexander Farnerud, and Matteo Darmian carried Torino.

Torino started the game on the front foot, with Cerci forcing a routine near-post save from Neto before the Brazilian keeper had to punch away a corner kick dangerously destined for an unmarked Torino player. Fiorentina responded by beginning to work some quick passing between their fantastically technical attacking 5, and Matias Fernandez produced the first Viola effort on goal with a curling free kick that was well parried by Daniele Padelli in the granata goal. Facundo Roncaglia was the next to threaten Padelli's goal, after excellent build up and a trademark Joaquin run on the byline ended with a cross to the back post, where Roncaglia could only volley over from close range. Borja Valero also stepped up with a dangerous shot after a solo dribbling move, but just missed wide of the far corner. Fiorentina threatened again from a corner, with Gonzalo Rodriguez heading the ball across goal, but the stretching Joaquin couldn't deflect it in. Borja Valero again came close from just outside the box after an exchange with Ilicic, but Cerci then produced Torino's best chance of the half, turning Roncaglia and firing a low shot that took a full stretch Neto to palm it out. Cuadrado responded with an excellent run of his own, firing a cross in for Borja to volley at the near post, but he again whistled his shot just past the post.

The game settled a bit in the second half, although for 10 minutes Torino were the dominant team after Fiorentina generally having the better of the play in the first half. The most dangerous home incursions all came through Cerci, especially a low cross that was eventually scrambled clear by Tomovic. Underwhelming Brazilian striker Barreto also had an excellent chance on a Torino counterattack, but shot straight at Neto. The game lost shape as both teams made substitutions and became more cautious, attempting to keep the opponent from breaking into space. Ilicic was replaced (a little bizarrely) by transfer-listed Iakovenko, who was unable to produce anything of note. The best Fiorentina chance of the half came when Mati combined with Pizarro, and Pek sent a low ball across the box which took a deflection and rolled across the goal without anyone able to tap it in. The final chance of the game fell to the home team, with Cerci driving a ball across the box to substitute Meggiorini, who connects but wildly, sending his volley wide and over from close range.

Neto (7): An excellent performance for the young keeper, with a couple exceptional saves and (more encouragingly) some terrific work claiming high balls on set pieces. One of his best performances in a Fiorentina shirt, and growing, with a perfect 5 shutouts in his last 5 appearances.

Tomovic (6.5): Solid and tenacious as always, one wishes he were more agile going forward. No one threatens down his side.

Gonzalo (6.5): Attentive, with some trademark clean-as-a-whistle challenges. Could have given more verve to the side, but a generally good outing for the Argentine who should also claim accolades for the 5 consecutive clean sheets.

Savic (6): Solid in the tackle, and we are now used to his imprecision with the ball. One lapse in concentration on a Torino counter, but otherwise a passing performance.

Roncaglia (5.5): He was handed the hardest assignment (Cerci) and shifted to his least comfortable side. For 40 minutes he looks phenomenally up to the challenge and nearly scores, then Cerci burns him for the first time and he never seems to fully recover.

M. Fernandez (5.5): Unable to repeat the sparkling performance of midweek against Chievo, he provides a couple of Fiorentina's best chances but vanishes for most of the second half. Inconsistent.

Pizarro (6): His first half is on the level of what we saw last fall from Pek, giving rhythm and intent to the whole side, and covering well Torino's attempts to come out of their half with the ball. But in the second half the imprecision and slower play returns.

Borja Valero (7): Misses the winner on 3 occasions, but it's more a case of bad fortune than mistakes, as he created two and grazed the post with a difficult near post volley on the last one. Always involved in build up and runs his socks off leading the pressing... Happy 29th Birthday to our todocampista, we wish he had celebrated with a goal!

Joaquin (6.5): He interchanges positions with the other forwards often, and does fantastically well in a couple runs into the box. Misses the goal just barely at full stretch and provides a delightful assist to Roncaglia.

Ilicic (6.5): Interprets the false 9 very well in build up, but unsurprisingly hasn't unlocked how to combine this aspect with putting himself into goalscoring areas. Perhaps unjustly replaced on 63' with a much less effective Iakovenko.

Cuadrado (6): Flashes of himself, but often too indecisive with the ball at his feet. One excellent assist to Borja, but perhaps doesn't have the football intelligence yet to play a flexible forward role?

Iakovenko (5.5): Two stupid fouls sum up his contribution in 30 minutes of play.

Montella (6): Got the team set up right in the absence of Giuseppe Rossi, but the goal doesn't come and his subs only make matters worse. To be fair, his attacking options on the bench were limited, but one wonders if Wolski, Vargas, or Rebic might have been better choices than Iakovenko. 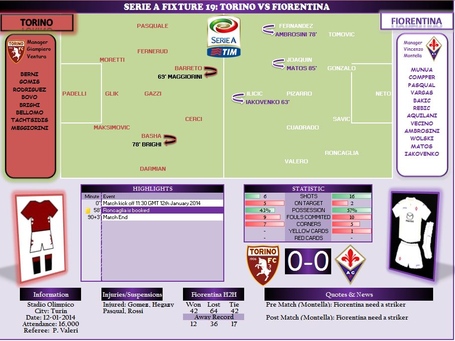