Fiorentina come from ahead to lose points once again and show themselves incapable of finishing games...

Fiorentina waste a storybook comeback by Juan Manuel Vargas and let another Viola alumni hurt them as Massimo Gobbi scores in the waning seconds as defenders watch and Norberto Neto was once again shown to be not ready for prime time.

Fiorentina had struggled mightily in the first half, unable to create any kind of offense, without any continuity between offense, midfield and defense and showed themselves vulnerable time and time again to Antonio Cassano and his teammates.

Further complicating matters was an injury to Guiseppe Rossi after the 30 minute mark. Rossi had to leave the match for a leg problem. Initial reports said calf, but later stories now say hamstring, we will see. His replacement, Ante Rebic, put in a fine performance, earning free kicks and keeping defenders on tehir heels, but, obviously, he isn't the same quality as the co Serie A  goal leader.

That lack of teamwork and finally cost la Viola as they gave up a deflected goal by Walter Gargano in stoppage, yet another example of this team's lack of focus and concentration in the final moments of halves.

At the half, Fiorentina Coach Vincenzo Montella rolled the dice and brought in Vargas for an invisible Rafal Wolski and immediately El Loco put his mark on the match earning two corner kicks and charging into the box.

The constant pressure eventually paid dividends as Fiorentina earned a corner and Borja Valero crossed the ball to Gonazalo Rodriguez who headed it into the corner of the net.

Fiorentina kept up the pressure even bringing in Juan Cuadrado for defender Facundo Roncaglia and the pressure paid off again as Vargas got a rebound in the box, spun around and lashed it at goal, deflecting off a defender and the goalie and went in, putting Fiorentina ahead.

The joy would be short lived as Fiorentina failed to close the match out, either by pressing for a third goal or sitting on the ball in the corner and sat back and let Parma come at them and allowed a last second cross, which Neto flailed at ineffectively. Also at fault is Rodriguez, who just stared at the ball and failed to block out a charging Gobbi who headed it in easily.

These two lost points will be missed come end of season, but for now, Fiorentina hold on to 5th place, extending themselves from next weeks opponent, Lazio, by one point.

Neto(4) made 3 saves early, had no chance on the first goal due to a deflection but was horribly positioned on the second goal and has shown himself once again to not be ready for the big time. His reactions on crosses is horrible, his ditribution is worse and his long kicks never reach a teammate. He might as well be a NFL punter. Most worrying is that the lack of team concentration down the stretch can be fixed, but can Neto?

Roncaglia(5)- horrible first half, thinks he's a midfielder and was rarely involved in the defense. played better in the first half, but again, only on the offensive side. He might be a Vargas, if Cuadrado and Joaquin weren't in front of him, he might be a good candidate as a right side midfielder or even a forward.
Rodriguez(5)- also a horrible first half, slightly redeemed himself with his goal, but was a complete spectator in the final minutes when it counted. Also got a stupid yellow card in the offensive zone for dissent that now puts him in danger of missing a match
Savic(4.5)- don'tknow if he's still injured, but I now am beginning to see the reason for the scorn with which Manchester City fans regard him. he's no Nastasic, that's for sure. He's beat constantly, is lukcy to get back and give up a corner kick. i would much rather see Compper at this point.
Alonso (6)- rough first half for the kid, but the rest of the defense didn't help out much. Second half was night and day, he got his feet under him, won some defensive battles and showed a facet of his game that Pasqual doesn't have, the ability to charge defenders and work his way into the middle of the field.

Aquilani(5)- Not really a good day for him, could be fatigue, i don't know, but the midfield really sucked the first half. Second half was better.
Pizarro(5)- horrible first half, inaccurate passing, not in position on defense. first part of the second half he nearly disappeared ocmpletely as Vargas took over. He featured more in teh waning moments, but couldn't sterr the club to a victory, although he did try to half possession until the end.
Valero(6)- He struggled early, but came on in the second half and started finring dangerous free kicks and corners into the zone. Finally got the assist on the first goal.

Joaquin(5.5)- Pretty useless in the first half, played better in the second. I'll be glad to get Cuadrado back full time
Wolski(4)- was he even on the pitch?
Rossi(4)- Not a factor, one or two shots no where near the goal. Off injured.

Subs
Rebic (for Rossi)(6) - lots of promise, won a couple of free kicks and really looked promising. He's rough cut tho and needs some polishing
Vargas (for wolski)(7.5)- should've been the whole story and should've had all the glory. The title was going to be " he ain't heavy, he's my brother.
Cuadrado (for roncaglia)(5.5) didn't look himself out there, perhaps just rust, or being in an unfamiliar role. Needed to just take the ball to the corner and kill it off


Montella(5)- The team did not come out ready to play. perhaps the worst first half of play in his era. he did makes the right moves in the second half, but did not get the team to kill the match in the waning moments and dropped another two points theat should've been in the bag. Needs to teach this team how to finish matches

Davide Massa(6)- no glaring mistakes, a few nit picky moments, didn't figure in the result. that's all you can ask of Italian refs nowadays, I guess. 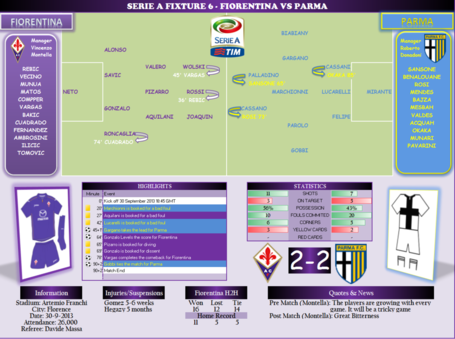 Montella
"There is bitterness. In the first half we were not very brilliant, parly because of Parma. During the second half, I saw a great Fiorentina,"

"You have to bring home these games. we had to keep the ball, but instead we tried to break thorough and we conceded a goal."

Fiorentina travel to Dnipropetrovsk on Thursday to play Football Club Dnipro Dnipropetrovsk in what is arguably the most important match in their Europa League group play. A win in the Ukraine, not only puts la Viola in first place in the group, but, with a home and away tie against what most people consider the weakest team in the group, Pandurii Targu-Jiu, up next,  would set up Fiorentina to put a firm hold on the group.

Dnipro are currently second in their league, are in a qualifying spot for the Champions League and are coming off a 2-0 win against Chornomorets and have not lost since the end of July.

Weather could be a factor, forecasts show an 80% chance of precipitation and since the temperatures are not supposed to get over 38 degrees, it's a good chance that moisture will be snow. That will have to favor the home team.

La Viola will follow up the trip to the Ukraine with a trip to Rome to face off against Lazio. Lazio look to be a firm contender to be in the second tier of teams, and if Fiorentina wants to be part of the peloton, or lead group in Serie A, to borrow a bicycle racing term, they will have to get results in these matches against the other contenders that aren't the "Big Squads." Rodriguez and Pizarro will have to be careful or they'll miss the Juve match due to yellow cards.