Yours Is No Disgrace; Inter 2-1 Fiorentina

Losing at the San Siro by only one goal is never something to be ashamed of...

Share All sharing options for: Yours Is No Disgrace; Inter 2-1 Fiorentina

Fiorentina went into the San Siro to face an Inter squad that had laid 7 goals on their last opponent, missing three prominent starters and nearly came out with a result.

Guiseppe Rossi scored his 5th Serie A goal, tying him with this fuzzy headed character named Cerci, but Fiorentina made a few mistakes and let Inter off the hook, allowing goals from Estanban Cambiasso and Joanthan. Inter continue to be undefeated while La Viola drop three points. The result puts Fiorentina in 5th place with 10 points.

Fiorentina out possessed Inter 54% to 46%, out shot them 18 to 15 and had 1 more shot on goal, 6 to 5. From what I understand, it took some stellar saves from the Intern Goalie to keep Fior on one goal, but only getting a third of your shots on goal is not great marksmanship. Fiorentina will have to do better.

I was unable to see the match, so really don't have a lot to import to you, other than that you (and the team) should keep your head up. It's a long season, and if reports are to be believed, this Viola squad took it to Inter for long stretches of the match and has a great chance to reverse this decision on the return leg.

Manuel Pasqual went off injured, so his participation in the next match is questionable. David Pizarro will be off suspension and should be back for Monday's match against Parma.

I was not able to see the match, so will defer to you all to put up your own report cards

"It was a great performance, (we played) with character and just as we thought we had it won, we conceded two strange goals."

"We still have players who need to grow, but the team showed it is a team together."

"It was a mistake to feel as if we had the game under control and we allowed Inter back into it." 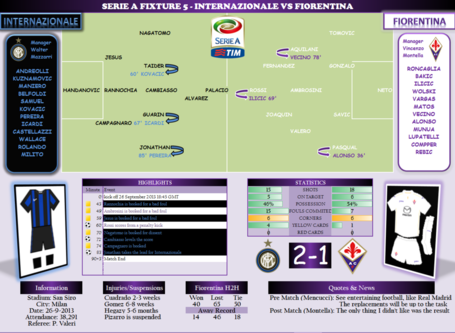