Bang A Gong! Fiorentina Unbeaten In The First Month Of Serie A.

Sometimes they're dirty, sometimes sweet, but after a stumble last week, Fiorentina seem to be in the black as they put a diamond-star halo on Atalanta and win on the road 2-0.

Share All sharing options for: Bang A Gong! Fiorentina Unbeaten In The First Month Of Serie A.

Fiorentina beat Atalanta at Bergamo today with goals from Matias Fernandez and Giuseppe Rossi to seal a 2-0 win to remain unbeaten in Serie A. La Viola have now only lost one match in all competitions, the lone loss a 1-0 defeat to Grasshopper, which did not hurt the Florentina club as they advanced on away goals despite the loss.

It wasn't always pretty and it wasn't always convincing, but results are results and a road win with a clean sheet is never anything to sneer at especially after a disappointing draw and a couple of bad injures last week and with a trip to Milan to play Inter this week looming.

Further complicating matters was a short week after Europa League play, and several players playing their third match in a week.

Vincenzo Montella mixed up the lineup just a bit for this match. He stuck with the 4-3-1-2 formation, however. Stefan Savic made a return after his knock on International duty, lining up next to Gonzalo Rodriguez in the defensive middle, with Manuel Pasqual and Nenad Tomovic as the Full Backs.

Massimo Ambrosini slotted in as the midfield stopper, with Fernandez and Alberto Aquilani on each side of him and Borja Valero as the attacking midfielder. Rossi took up his now familiar role, but Rafal Wolski got his first Viola start next to him.

Fiorentina started out a bit sloppy again, looking a bit ragged in the first 40 minutes, exchanging shots with Atalanta, including a shot by Viola alumni Giulio Migliaccio that required a Neto save in the 25th minute.

But at the 41st minute, Valero served a wicked ball to Wolski, who headed it at the goal. The ball deflected off the goalie, off the crossbar directly to a change Fernandez who buried it with no mistake.

Fiorentina saw off the half with the one goal lead. Fiorentina out possessed Atalanta 62% to 38%, out shot the home team 8 to 6, with two shots on to one for Atalanta.

The home squad started the half with a renewed sense of determination and took the ball to Fiorentina for much of the beginning of the second half. La Viola seemed willing to absorb the pressure, sending off counters when available.

Ten minutes into the second half, after Joaquin was subbed in for Wolski, Migliaccio hit the crossbar and the warning bells seemed to ring in the visitors ears as they then began to impose themselves back on to the match.

Pasqual served a screamer to Joaquin outside the box on the left side and Joaquin slapped a side winder of a shot at goal, but Andrea Consigli reacted with a foot to deny Fiorentina the second goal.

Relief would be short-lived, however, as Rodriguez headed a ball to Rossi after a corner and the sharp shooter made no mistake putting the ball into the corner of the net where the goalie had no chance to intervene.

Atalanta had one more good chance but Neto's knee blocked a shot from Germán Denis and La Viola saw off the match with some of their now familiar possession style ball control.

Atalanta wound up with sixteen shots, but only managed two shots on, while Fiorentina got five of their twelve shot on net. Possession was more even at the end of the match, with Fiorentina holding the ball for 56% of the time.

Montella and his Viola have only a few days to enjoy the win however as they travel to Inter this Thursday and will head back to the Franchi for a Monday match up against Parma. Thursday's match will be shown live on beIN Sports.

Neto(7)- two fine saves and a clean sheet. 4 wins and 1 draw in all competitions. not a bad start for the first month of his first season as the go to goalie.
Savic(6)- coming off an injury, didn't do much for me first half, but really didn't do anything to negative either. had a fine sliding stop to keep the clean sheet late. pretty good for his first action since international play.
Rodriguez(6.5)- had a rough start, but the whole team did. woke up and played solid after that. got an assist and looks to be getting a contract extension. All is good in Gonzalo-land
Tomovic(6)- gave away a howler, but no damage done. looked a bit scary when driven on, seemed like his man had a step on him. did have some timely interventions and looked much better second half.

Pasqual(6)- Pasqual was ok today, most of the match he just played his role, which is really all that we can ask of him. Second half a screamer of a cross to Joaquin that would've been a goal but for a good play by the goalie.
Valero(6.5)- Valero seemed to play a bit more on the left today than a central role, as we've become accustomed to. awesome cross to Wolski which ended up in the Fernandez goal to put Viola ahead for good. Instrumental in the possession battle going down the stretch to see out the match.
Ambrosini(6)- played a solid defensive midfielder role. He's not Pek, but I don't think Montella is asking him to. We have enough offensive options in the midfield, so being the defensive midfield holder and doing it well is more than fine for me.
Aquilani(6.5)- Aquilani playe much more of a role in the Viola attack today. he still can't tackle, but again, that's not really his role. Had a weak shot at goal from a long way out that was a bit selfish, but heck, if it had gone in he'd be a hero. no worries
Fernandez(6.5)- didn't look as awesome today, but the competition was of a higher quality. Made no mistake on the goal, however.

Wolski(6.5)- First start of his career in Serie A and really didn't look much out of place. had a bit of a stumble in the box early, trying to be too fancy, but was involved in play for most of his time after that. His header lead to the first goal. great start.
Rossi(7.5)- Gomez may have the big price tag and get the headlines, but Giuseppe is quickly reminding people of the player he was before the injury and could quite possibly turn out to be the best pick up Prade has made yet.

Montella(7)- Kept the squad focused after the bad injuries, a European match and a road trip to boot.The team is fully invested in his style and his game plan. Starting Wolski proved to be a great choice. Some real big matches coming up soon, however, and he'll need to keep the lads focused. 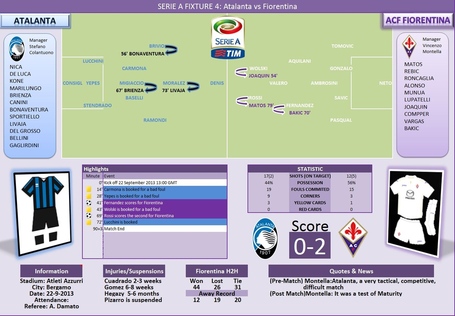