Ryder Matos started his Fiorentina senior squad career with a goal on his first touch as he and La Viola cruised to a a 3-0 win in a clockwork-like effort to kick off their Europa League Group stage.

Share All sharing options for: Welcome To The Machine; Fiorentina 3-0 Paços Ferreira

Fiorentina made few mistakes and capitalized on their opportunities today in Florence to beat Paços Ferreira. Goals by Gonzalo Rodriguez, Ryder Matos in his first Senior squad appearance and the third from Guiseppe Rossi had Viola fans dancing in the aisles.

Fiorentina dominated most of the match, and yet it took 30 minutes before they could break though with the first goal, a header by striker want-to-be Rodriguez off a corner kick, served by Guiseppe Rossi.

The score remained 1-0 through halftime and paast the one hour mark until Borja Valero served a perfect goal to just subbed in Matos who chipped it in off the post.

A perfect pass from Alberto Aquilani to Rossi set up the third and final goal for Rossi.

The win puts Fiorentina on top of their group, ahead of Dnipro by goal differential. Dnipro, Fiorentina's next Europa League opponent, beat Pandurii on the road 1-0.

Norbeto Neto(6.5) - one good save to keep Fior in the lead and a couple of other ordinary save

Marvin Compper (6.5) - solid. stepped up when necessary, never beaten. blocked a shot in the late going to keep the clean sheet.
Gonzalo Rodriguez (7) - continues to be the guy on set pieces. solid on defense as well
Nenad Tomovic (6.5) - solid on defense and a threat on the right side going forward as well.

Marcos Alonso (6) - took a yellow, but stopped a dangerous play. had some good moments, but need to improve just a bit. got Cramps at the final whistle.
Borja Valero (7.5) - Man of the match. always a step ahead of everyone else.Got the assist on teh second goal.
David Pizarro (6.5) - lots of deep balls early that didn't pay off, but he worked hard and ran the offense
Massimo Ambrosini (6) - solid, very few mistakes in his own zone, a few questionable crosses, but did ok.
Mati Fernandez (7) - Looked like the guy we thought he could be. great control, always dangerous. nice day for Mati.

Guiseppe Rossi (7) - struggled to get involved early, but warmed up, got the assist on the first goal and showed his stuff late. what a goal
Joaquin (6) - missed a fine goal by being half a step off side. had a rough start, but

Alberto Aquilani (for ambrosini) (6) - silly yellow right when he came on but a fine assist on the Rossi goal.
Ryder Matos (for Joaquin)  (7) - gets rated just for his goal. nice way to get your career started.
Marko Bakic (for Rossi) (NA) 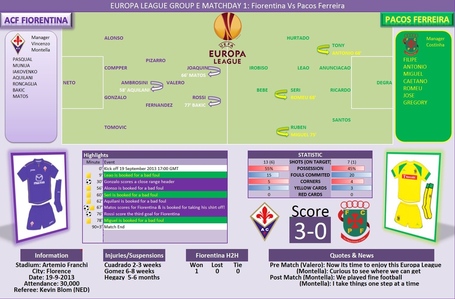