We Came To Play; Genoa 2-5 Fiorentina

Fiorentina put five goals on Genoa and stay perfect in Serie A ...

Share All sharing options for: We Came To Play; Genoa 2-5 Fiorentina

Coming off a 2 to 1 home win in their home league opener against Catania and a loss mid week in the Europa League,  Fiorentina brought out their big guns to respond with Gioseppi Rossi and Mario Gomez each scoring a brace along with a header from Alberto Aquilani to beat Genoa 5-2.

Vincenzo Montella changed up the formation for this match, coming out with a 4-3-1-2 in front of goalkeeper Neto, with Manuel Pasqual, Marvin Compper, Gonzalo Rodriguez and Nenad Tomovic in back, Alberto Aquilani, David Pizarro filled out the middle, with Borja Valero as the play maker and Rossi and Gomez up front.

Genoa were coming off a 2-0 loss at Inter and were looking for a big home opener, but La Viola struck early at the 10 minute mark with Aquilani's header and never looked back as Rossi made up for an earlier chance as he struck from long distance to double the lead.

The earlier chance had come at the second minute of the match, as Gomez hit the post and the ball dropped right to the feet of a wide open Rossi who promptly deposited the ball about 40 rows up in the stands.

A few minutes before halftime, Fiorentina were charging again, as Pasqual drove and served up a perfect cross to Gomez who tipped it into the net for the first of, hopefully, many goals in a purple shirt.

The squads went into the locker rooms for half time with Fiorentina ahead 3-0, but a lot of the credit for the scoreless half would have to go to Neto as he made about three really good saves.

Genoa tried to make things interesting, Alberto Gilardino bringing Genoa to 3-1, but Rossi answered the home squad the next minute.

Compper was called for a foul in the box and Francesco Lodi converted, but the last goal was for Gomez, a penalty kick, nothing more than an exclamation mark.

The match got a bit chippy towards the end, with Fiorentina coach Montella being sent off. He'll likely miss the next match after the International break.

The win puts Fiorentina at the top of the table with four other teams with perfect records, Inter, Juventus, Napoli and AS Roma. 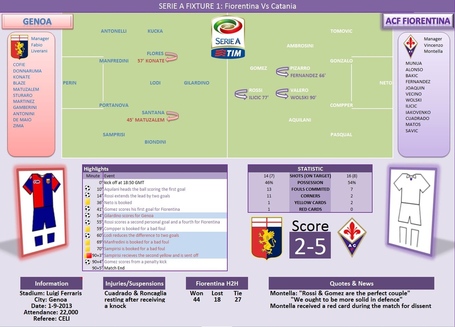 Montella
"I am not surprised by how well Rossi is playing, he has always been someone who is able to find the net. I know he can improve even more and with gomez, they make the perfect couple."

"We played a perfect 20 minutes to start the match and thought we had finished off the match, but we slowed the tempo in the second half and allowed them back into it.

"We need to do better, again we conceded two goals tonight. We should be more solid in defence."

Note: Coach Montella ejected in this match will likely miss the next match