You Had A Bad Day; Fiorentina 1-1 Cagliari

A rusty squad from International break plus two starters off injured, perhaps seriously, equals two lost points for Fiorentina and an uncertain future.

Share All sharing options for: You Had A Bad Day; Fiorentina 1-1 Cagliari

Two players who featured prominently in the media frenzy of the summer transfer season for Fiorentina came back to haunt them today as Cagliari held the home squad to one goal and equalized late to steal 2 points off the favored Florentine side.

Radja Nainggolan shut down Juan Cuadrado completely, finally sending the Viola star off injured with a dislocated shoulder and then, for giggles, went on to shut down Cuadrado's replacement, Joaquin. Nainggolan (ohhh Black Betty..) also just missed opening the scoring as he sent a shot just wide in the second half.

Michael Agazzi, pitched by the media as Emiliano Viviano's replacement all summer, crashed into Fiorentina's most expensive player and sent him off with a knee injury and then made a fingertip save on a bouncing Guiseppe Rossi shot that was heading for the bottom corner of the net.

Borja Valero scored for the home side in the 71st minute while substitute Mauricio Ferreira Pinilla scored the equalizer a minute before stoppage.

Further complicating things for Fiorentina was a red card for David Pizarro for dissent as he asked referee Andrea De Marco why he was scared to give a penalty in stoppage. Pizarro will miss the next Serie A match and perhaps one or two matches after that as well, as this is his second suspension for comments regarding officials.

Early estimates seem to think that Cuadrado may miss twenty days, while Gomez could be out for two to three weeks, or maybe even as long as six weeks. Both players look likely to miss the first two Europa League group play matches as well as Serie A games at Atalanta and Inter, along with a home match against Parma. Cuadrado might be back in time for a trip to Lazio, while Viola fans will be hoping for a Gomez return for the next match, after an international break.

Later, reports, however, seem to suggest that Gomez's injury could be worse and he could miss two to three months. Viola fans should wait for official word from the team in the next day or two before jumping out of buildings, however.

Fiorentina coach Vincenzo Montella had to scramble today to find a fit squad as twelve players were out on International Duty and only returned a few days ago.Injuries also figured into his decision.

Stefan Savic had played a full 90 minutes and taken an ankle knock, so Nenad Tomovic, who had sat on the bench for his National team, was put in his place on the left, while Facundo Roncaglia was brought in to play on Gonzalo Rodriguez's right side in front of goalie Neto.

With David Pizarro coming back after a match in South America and a friendly against Spain in Switzerland, Montella brought in Massimo Ambrosini. Ambrosini played in Alberto Aquilani's spot next to Juan Cuadrado, who also was coming back from around the world.

Aquilani played in the middle, with Borja Valero on his left and Captain Manual Pasqual played out left. Pasqual was dealing with his own injury as he had a gash on his forehead covered with a headband.

Out front were Gomez and Rossi.

Long time Cagliari player and new coach Diego Lopez fielded a 4-4-2 formation in front of Agazzi with Nicola Murru, Davide Astori, Luca Rossettini and Gabriele Perico in defense, Daniele Conti a the defensive midfielder, Nainggolan and Daniele Dessena on the midfield wings and Andrea Cossu as the attacking midfielder.

First half mostly featured a lot of possession for Fiorentina, as they out possessed Cagliari 57% to 43% in the first half, but it was a passive sort of possession, with a lot a time spent passing around the middle third and no real threats. Fiorentina got off eight shots, but none were on net. Cagliari only had four shots, none of those on net either.

Near the half hour mark, Cuadrado went off injured and Joaquin came on, but he failed to make any headway against Nainggolan and Murra.

Halftime came around with the match scoreless and neither side with any serious chances.

5 minutes into the second half came Gomez's moment as he broke through a couple defenders and wound up one on one on the goalie, but instead of glory, Viola fan's were driven to despair as the Cagliari goalie charged Fiorentina's big signing and the Viola star went down in a heap and had to be stretched off.

The next few minutes were mostly Cagliari's as Fiorentina seemed to be staggered by the loss, but Fioretina soon righted the ship and got the next few shots off.

Rossi got a shot on goal at the one hour mark, but Agazzi managed to parry it away. On the ensuing corner, Rodriguez headed a ball just wide and Rossi just missed another shot.

Cagliari answered with a ball that Nainggolan just missed on, deflecting it just wide.

Montella then decided to bring on Pizarro and it almost immediately paid dividends as Ambrosini drilled a ball that Rossi headed on. The ball deflected off a defender straight to Valero who headed it in before Agazzi could get to it.

The joy was short lived, unfortunately as Fiorentina failed to hold possession and Cagliari got a chance at the end of regulation. Valero gave up a ball in the Viola corner which Ibarbo pounced on and served into the zone and Pinilla headed it into the corner.

Fiorentina had one more hope dashed as Rossi went down in teh box, but De Marco didn't see enough to give the home squad the penalty kick. Pizarro was then sent off for dissent and the costly match was all but over. 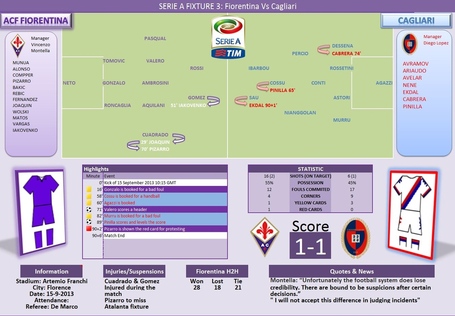 Neto(6)- Wasn't much for Neto to do today, he came out to sweep a ball and intercepted a cross, but didnt really do much else. Wasn't really a factor on the goal.

Pasqual(5)- 2 successful crosses out of 13 tries. He got one cross that led to a deflection off the cross bar, but his effort on the Cagliari goal is almost laughable. Probaboy should have sat this one out. Some poeple saw his performance as heroic, i'm not buying it.
Valero(7)- Struggled early as he was called on to do mroe than he would with Pizarro in there. Once Pek got on he moved straight up the field and got himself in a spot where he could score. Man of the match. He did have a momentary brain fart, giving up the ball that eventually led to the Cag goal.
Aquilani(6)-did ok, but there were some struggles early with teh entire midfield. once Pek got in, he looked to be more comfortable
Ambrosini(6)- he was ok, nothing spectacular, no major mistakes either. he did get in the cross that lead to the goal.
Cuadrado(5)-Obviously slowed by his time in South America and all the travel he was beaten time and time again by Naingollan until he was knocked over and injured

Gomez(6)-Gomez put in a yeoman like effort until he got his chance to score and was taken out by Aggazi
Rossi(6)-First half played way to conservatively and had a shot or two go wide. Second half he was more like what we want to see, hr charged the defense he took balls away, he dribbled, he passed and he shot.He also got in the box, where he belongs, and got off the header that lead to the goal.

Subs
Joaquin(5.5)- Couldn't really make a difference on that side. Cagliari's defense did quite well tho, to his defence.
Iakovenko(5)- Never really got into play. Was pulled down just outside the box, but was ruled to be offside.
Pizarro(5.5)- made an immediate difference in the tempo and style of play, but allowed himself to lose his cool, again, and was sent off. puts his team in a bad position for the next serie A match day.

Montella(5.5)- I dont agree with MOntella's decision to play Pasqual today, he was clearly not even close to being at his best. Also question his decision to sub for a sub, when he brought on Pizarro for Joaquin, I would have pulled pasqual, who at that point had been horrible offensively and had been beat time and time again. He could have moved Joaquin over to the left, he could have had valero cover, there were a lot of options that would have left a fresher Joaquin on. Montella will also most likely get a fine for his comments on the refs, perhaps even a suspension, Serie A is very touchy about that subject.

Andrea De Marco(4.5)- All fans want is consistency. Not only consistency from a ref in one complete match, but consistency between refs from match to match as well and neither of those happened today, or in Serie A for years, for that matter. Calls in the first half seemed slanted towards the visitors, Gonzalo Rodriguez was given a yellow card for what looked to be a fairly even challenge in which the Cagliari player had a handful of Rodgriguez's jersey, Cuadrado was knocked over and had his shoulder dislocated with no call. Agazzi created contact with Gomez, resulting in a possibly serious injury which could've been called and a penalty with more contact than in the Milan game yesterday is ignored and a player sent off with a thin skinned red card further affecting the game and the season. Too much ref participation once again in a Serie A match, they should not be the story.

"De Marco had a bad day, the penalty was clear. When he reviews the film he will see his mistake. From today I will expect the same treatment as other teams."

"I have tried not to comment on refereeing decisions, but I feel the need to say something now,"

"I will no longer accept the lack of uniformity in treatment of some players compared to others."

"The referee must not be insulted, and that’s fine, but at least in this you need some sort of uniformity of treatment. These incidents will always cause controversy. The penalty could've been called or not called, but that's not  the reason for my anger."

"I hope my complaint has not gone over the line or offended the refereeing system, which has improved over the years, but I cannot accept this."

"Unfortunately the football system does lose credibility. There are bound to be suspicions after certain decisions."

"The injuries are certainly the saddest note of the day, we can only hope they prove to be less serious than they seem".

"Apart from bad luck, I think Fiorentina played a solid game. What with the players at our disposal, we could not have done better. We were in control until the end and I think we should’ve finished it off earlier.