Fiorentina start off the season with a win at the Franchi, beating Catania 2-1...

Catania came to Stadia Artemio Franchi to wrap up the first match day of Seria A play with Fiorentina this evening and Fiorenitna did not disappoint the fans, getting goals from Giuseppe Rossi and David Pizarro to send Catania back to Sicily empty-handed.

La Viola came into today's home match after a 2-1 victory against Grasshopper  in Zurich on Thursday in the first leg of their Europa League Playoff match up. The return match will be in Firenze on Thursday.

The match start out all Viola and it only took 15 minutes for a nice charge down the field wound up with a dish to Cuadrado from Aquilani. Cuadrado took the ball to the end line and passed back to a wide open Rossi who snuck the ball into the corner of the net.

Catania turned the pressure up and started getting chances which eventually paid dividends as a mistake led to a shot by Barrientos snuck through the defenders and past  Neto for the equalizer.

Pizarro put the home squad back in the lead for good a few minutes later, collecting the ball at the edge of the box and rifling it home.

"I felt the team were absolutely terrific. Gomez and Rossi really compliment each other and will only grow better."

When asked about Adem Ljajic's exclusion from the squad.
"I did not call up Ljajic because his situation is not clear." 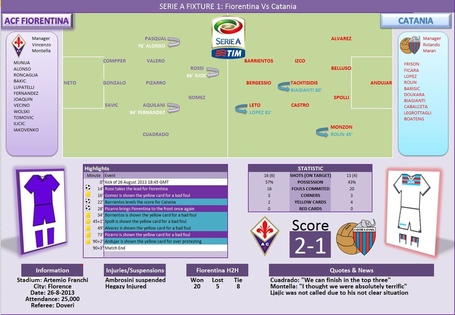