La Viola begin their Serie A campaign with a tricky fixture at home against Vincenzo Montella's former charge.

It's finally arrived. After the hype, anticipation, nerves, and general hysteria of Silly Season, the real Silly Season begins: Serie A. I call it "silly" perhaps unfairly, but it does capture the continual drama, shock, horror, and delight that the Italian top flight welcomes every season. This weekend has already provided surprises, from a Luca Toni double to sink Milan to the revitalized Parma side being held at home by Chievo. If you aren't watching, you are likely silly yourself.

But with the unpredictable nature of the Serie A, it should come as no surprise that despite heavy hype this offseason, the general sentiment around the Tuscan city is cautious optimism as Fiorentina look to end the first week of Serie A with three points. We face a Catania side who, despite losing key players Francesco Lodi and Alejandro Gomez, look a very formidable team with a solid calcio philosophy and a solid defensive line. Catania finished last season an impressive eighth in the table, only losing two more games and conceding two more goals than La Viola, and beat our boys on the road in a controversial and chippy game where Alberto Aquilani was sent off (after one of his finer displays of the season too, it should be said). Expect the defensive discipline to remain intact for the Sicilian club with the addition of Greek midfield talent Tachtsidis, a player I rate very highly. The core of this Catania side also remains solid, with the reliable Bergessio leading the line, Izco (no, not that one) and Barrientos orchestrating in the middle, and veteran Leggrotaglie marshaling the defense.

Fiorentina should not go into this match with anything approaching trepidation, however, as good news is in abundance on match day. David Pizarro is expected to start despite an injury scare a couple weeks ago, so we will have the pleasure of watching Fiorentina's strongest eleven, in our now trademark chameleon 3-5-2 / 4-3-3. Giuseppe Rossi and Mario Gomez are both predicted to start together in attack, and both are looking to open their scoring accounts with us at the first opportunity. The atmosphere will also be stupendous, with the Curva Fiesole sold out and the new home stands likely to look fantastic under the floodlights in the Florence night. What else can I say? I am sure we will all be giving this great team every ounce of support we can in their season opener! Forza Viola! 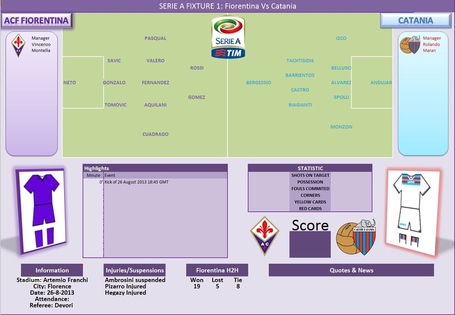 Note: For some inexplicable reason, BeIN USA is not broadcasting the game live in favor of a rerun of yesterday's Barcelona game. I have some choice words about this decision that I cannot put on this website, but they are apparently showing it on beIN Sport "Play" online, which I have never used before but is apparently free with your TV subscription. I should be live tweeting at least the first half, and there are also creative solutions to see the game that I cannot advertise or endorse on any SBNation affiliate.