Fiorentina grind out a good win in Zurich with dynamic play from their stars and fervent away support.

It wasn't as dominant or as stylish as we know this Viola side can be, but the result is as good a start as we could have asked for. A win away from home against an athletic and intelligent Grasshoppers side leaves us in an excellent position to advance at home next week in Florence, and felt like a great relief after poor exhibition performances away in Spain and Portugal.

The match started slowly as both teams felt each other out, and Fiorentina was often uncharacteristically direct out of the back with a true center forward target in Mario Gomez and the absence of David Pizarro in the midfield. A little of the slow and sloppy play seen in recent friendlies appeared here and there, but the team was much more organized, assured, and confident in Zurich. There were also brights spot of class throughout from the side in purple, as Borja Valero started exceptionally well, but it was Gonzalo Rodriguez's fantastic ball to Juan Cuadrado's equally fantastic run that opened up the match at the 12th minute. "The Vespa" controlled in stride, looked up for runners in the middle and (finding none) slammed the ball into the roof of a net from a tight angle. Fiorentina went on to for the most part dominate the first half, with Gomez setting up a dangerous Alberto Aquilani volley that was very well dealt with by Grasshopper keeper Burki.

Fiorentina got off to a fantastic second half start, scoring inside the first minute after Giuseppe Rossi (who impressed as the minutes went by) found himself in space, dribbled at the defense, and slotted a perfect through ball to Gomez. Gomez touched the ball around the keeper only to have his marker Grichting knock the ball into his own net before he could shoot. Gomez had several shots parried or blocked in the first half, and it was a relief for the ball to finally get into the net, if not directly off his foot. La Viola continued to control the game until a lapse in concentration at the 64th minute allowed a long Zurich cross to find Anatole N'Gamukolo to head the ball in unmarked from very close range. The game got increasingly physical and disorganized at this point as both teams tired (Fiorentina faster than their Swiss hosts), and in the finale Grasshoppers piled on pressure, especially at set pieces. After 5 minutes of added time, Fiorentina managed to hang on and gave the 3,500+ traveling Viola fans something to celebrate. 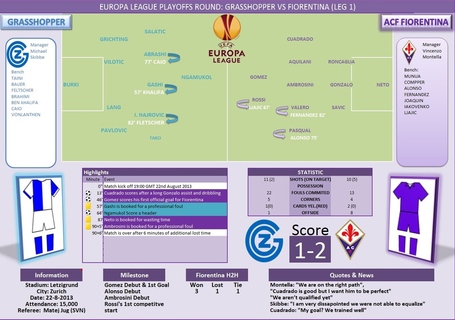