Fiorentina start a quest for their first trophy since winning the Coppa Italia in 2000-2001...

Share All sharing options for: Europa League: The Viola Quest For Silver

The match will be the first time Fiorentina have played in Europe since a controversial two legged tie against Bayern Munich in May of 2010 when Cesare Prandelli's men looked to have come back from terrible calls from Tom Ovrebo and his linesman in the first leg, with a goal from Juan Manuel Vargas and a brace by Stevan Jovetic only to have their heart ripped out by a 30 yard smash from Arjen Robben.

Fiorentina had put most of their resources and attention into the Champions league and never were able to regain ground in league play and finished mid table.Prandelli left that summer and the club never regained their form until last season, when they returned to fourth place in Serie A.

The Europa League, formally known as the UEFA Cup, emerged as a concept in 1955 as the Inter-Cities Fairs Cup. It originally was set up to promote international trade fairs. Previously, friendly matches had been set up between teams of cities participating in these trade fairs and it was from these friendlies the competition emerged.

Initially, only teams from cities participating in the trade fairs would be allowed to participate and league placement played no part in the selection.

However, although the Inter-Cities Fairs Cup is regarded as the predecessor to the UEFA cup, it was not organized by UEFA, nor is it recognized or the prior results recognized by UEFA.

In 1971, the competition was taken over by UEFA and renamed to the UEFA Cup. The UEFA Cup was intended as a competition between runners up in the domestic leagues.

Another big piece of the concept of the UEFA Cup, and one in which Fiorentina played a huge part in was the UEFA Cup Winners' Cup. This competition was created in 1960and was founded to provide a place for winners of countries domestic cups to face off. The idea was born as Inter-Cities Fairs Cup and the European Cup, later to be known as the Champions League, had been met with great success and popularity.

The first year of competition, however, was met with lukewarm reception by the major teams and leagues, due to most major leagues not having domestic cups or those that did considering domestic club play to be second rate and only 10 teams played in the inaugural season. The first go round was only considered semi-official and a pilot, and also was not recognized by UEFA.

Due to large attendance and good public response, however, UEFA did pick up the competition in the second year and by 1968 all UEFA leagues had domestic cups and participated in the tournament.

Fiorentina participated in that second tournament as well, losing in the final to Atlético Madrid in a single leg final.

After the creation of the Champions League in the 90s and the subsequent expansion of the tournament, allowing 2 and then 3 or 4 teams from each league, the UEFA Cup Winners' Cup declined significantly, eventually being absorbed by the UEFA Cup in 1999.

Fiorentina's best finish in the UEFA Cup was in 1989–90, when they finished as runners up, losing to Juventus on aggregate.

The UEFA Cup was eventually re branded as the Europa League in 2009.

While the prizes for participating in the Europa League are nowhere near as lucrative as the Champions League, there is still the chance to win some cash, as group stage qualification awards a base fee of €1.3 million.

Fiorentina will start this years edition against a club that has already been in competitive action as their opponents were recently knocked out of the Champions League by Lyon with two 1-0 legs in a third qualifying round tie.

Grasshopper is by far the most successful club in Switzerland, holding the records for Swiss Super League titles, 27, and Swiss Cup victories, 19. The club is the oldest team in Zurich.

Grasshopper were founded in 1886 by an English student and their best European finish was a semi final in 1977-78 UEFA Cup.

Against Lyon in the Champions League, Grasshopper started the first leg with an unusual formation in front of goalie Roman Bürki, a 22 year old Swiss keeper who started with Young Boys before before being loaned to Grasshopper in 2011 and was finally purchased out right before this season.

That formation held Lyon scoreless for over an hour, but the French squad did manage to finally score.

In the second leg, Grasshopper switched it up again, fielding the same 4 defenders, but removed the lone forward, inserting a sixth midfielder, Frank Feltscher. That formation kept Lyon off the board for 70 minutes, when Skibbe brought in his two forwards, but that change and the Swiss club pushing forward left them open for the counter and Lyon added a goal in the 80th minute and washed out of the Champions League.

We can expect the same goalie and 4 defenders, but it's anyone's guess as to what the coach does with the rest of his formation.

Fiorentina are coming off two poor friendly appearances to Villareal and Sporting Lisbon and will be missing their starting centerpiece, David Pizarro, at least in the first leg.

Without Pizarro, La Viola will likely field a 4-3-3 formation. The defense will almost certainly be anchored around Gonzalo Rodriguez, with Stefan Savic or Marvin Compper next to the center back. Manuel Pasqual looks to lineup on the left and either Nenad Tomovic or Facundo Roncaglia on the right.

Alberto Aquilani and Borja Valero look to bracket whomever fills in for Pizarro, which most likely will be Massimo Ambrosini, but could be youngster Marko Bakic or even Ruben Olivera.

Mario Gomez will almost certainly center the front line, and Viola Coach Vincenzo Montella will have to decide who will play next to him, most likely Juan Cuadrado and either Adem Ljajic and Guiseppe Rossi.

If Montella goes with a 3-5-2, it would most likely look something like Savic, Rodriguez, Tomovic; Pasqual, Valero, Ambrosini, Aquilani, Cuadrado; Rossi, Gomez in front of Norberto Neto.

On paper, things should favor the Italian side, but, as we well know, these matches aren't played on paper. Luckily, quotes and stories coming from Firenze lead me to believe the squad isn't taking this match lightly and intends to face it as if it's a final.

We'll be looking for your thoughts and game time comments, both here and on Twitter and hopefully a good time will be had by all. 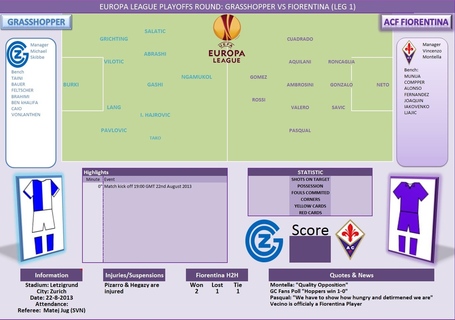