The Show Must Go On

The Actors may change, but the Game remains and the Show Must Go On. Arrivederci Jojo

Share All sharing options for: The Show Must Go On

It's a sad fact of modern sports, but the days of players spending more than a few years in one place are all but over. So, it's with a sad heart that we say farewell to our young star from Montenegro, Stevan Jovetic. Jojo heads for the green shores of England as the big money from Manchester City was finally too much to resist.

Jovetic will leave for a reported 26 million Euro transfer fee, with an additional 4 million in bonuses, which will be paid if Jojo meets certain performance goals. Jovetic will get a substantial raise as well, with some reports suggesting he could make 7 million Euros a year.

I have mixed feelings...

On one hand, I really don't want to see him go. He's only 23, if he's going to have a break out season it's probably going to be this up coming season and I'm a bit worried that the EPL is a bit rough for our fragile Jojo. For God's sake he's Ted's PRECIOUS! 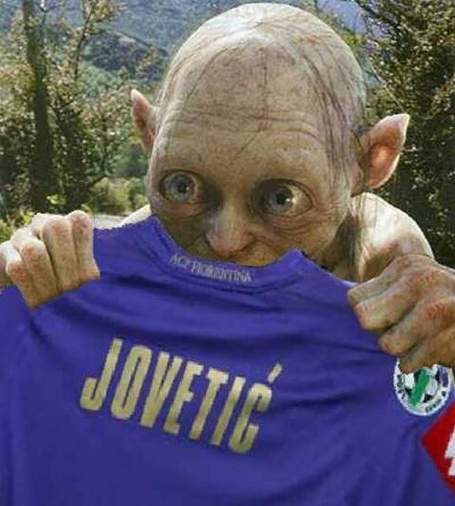 But on the other, he hasn't (recently) live up to our expectations, he IS fragile and Italian defenses have schemed for him and smothered him and at times he looked as if he were running through thigh high mud.

Not only that, he tore every ligament in that knee, he could quite possibly be damaged goods, one bad knock away from obscurity.

But I have his JERSEY!

If he has to go, the team got as big of a payday as can be expected, perhaps more than he's worth, right now at least and, most likely, we won't see him on the other side of the pitch, at least not this year. Also, since they (reportedly) purchased him originally for around 8 million Euros, the company will make at least 18 million Euros on his sale and could make as much as 22 million. That's incredible business.

Not to mention the fact that he won't be wearing black and white stripes...

So that's pretty much how the voices in my head sound.

Jovetic came to Firenze after being signed from Partizan Belgrade in May of 2008, after becoming the youngest team captain in Partizan history.

He played his first match in purple in the second leg of a Champions League qualifier against Slavia Prague on August 27th, 2008, coming in in the 70 minute. The match ended 0-0, but Fiorentina won the draw 2-0, and advanced to the Group stage but finished third in the group and were relegated to the then titled UEFA Cup, eventually bowing out against Ajax.

Jovetic got his first Serie A action under his belt 4 days later, in the season opener away against Juventus. It was a thrilling affair, with Pavel Nedved getting the Evil Empire ahead shortly before the half, with Felipe Melo getting a second yellow card and being ejected in the waning minutes and Alberto Gilardino scoring the tying goal a minute before stoppage. Jojo came on in the 53rd minute for Sergio Almiron and got off two shots, but both were blocked on the way in.

In fact, although Jovetic was to appear in 34 matches in all competitions and had many attempts, he struggled to get the ball on net, not scoring his first Fiorentina goal until April 5th, 2009, against Atalanta. His stamina was an issue as he only played a full 90 minutes in six matches that year.

2009-2010 was a much better year, Jojo got his scoring started early as he scored in his second league match that year against Palermo, scored a total 6 league goals and added two braces in the Champions League against Liverpool and Bayern Munich.

The team's collective push at the Champions League saw them reach the knock round against Bayern Munich, but the focus on the Champions League and the mental crash after the horrible way Fiorentina's CL participation that year ended cost the squad in League play and they struggle to achieve only an 11th place finish.

The summer of 2010 saw Fiorentina suffer two more huge blows as Cesare Prandelli quarreled with management and ownership and left to coach the Italian National Team and Jovetic was injured by a teammate in training camp, blowing out his knee and missed the entire next season.

Jovetic came back in the fall of 2011 and had his best season in Firenze, scoring 14 goals in 27 Serie A appearances, but the squad struggled, flirting with relegation, wracked with turmoil as coach Sinisa Mihajlovic was let go, being replaced by Delio Rossi. The dog and pony show that was 2011-2012 continued with fisticuffs and the subsequent firing of Rossi for his beat down of Adem Ljajic and finished with Firoentina avoiding relegation in the closing weeks and squeaking out a 13th place finish at he last moment.

All throughout his career the stories of his transfer to another team had been strong and steady, with pundits and experts postulating on his eventual destination before during and after every transfer season, but that summer the stories reached the point of a roar and it seemed that Jojo, who had up to that point remained steadfast in his statements began to waver a bit. Prior to the summer he wanted to remain in Firenze, he wanted to stay in purple, but that summer, he tone started to change.

Andrea Delle Valle sat Stevan down that summer, however, and asked him to stay another year, told him he had big plans and he would give him a raise. Jovetic agreed and an extension was arranged, along with a hefty buy out clause.

Unfortunately, strikers were a bit hard to come by that year, and Fiorentina were only able to bring in an aging Luca Toni and a question mark in Mounir El Hamdaoui, along with an Adem Ljajic that was coming off probably the worst year of his life. The lack of power in the front put the brunt of the pressure on Jovetic and he increasing saw double and triple teams, as well as zone defenses that were designed to both prevent the ball getting to him and smothering him once he did get the ball.

Jovetic responded bravely, with 13 goals in 31 matches, but Viola fans wanted and expected so much more and it seemed the writing was on the wall. After the season ended, Jovetic announced that he intended to move on.

The truth is, he wanted to go, he said he had done all that he could do with Fiorentina and you know what, he's probably right.

He played in the Champions League (ask Liverpool fans). He's been on teams that have finished fourth in Serie A on two separate occasions. he played a big part in taking this team from fighting relegation to this season's heights, nearly making third place and another Champions league spot..

So I'll hold my head high and wish Jojo the best and I'll try very hard not to sneer when the smarmy British commentators call him Joe-va-tick and Joe-Joe and whatever else they come up with and take solace in the fact that he leaves Fiorentina in a much stronger position than they were when he arrived,