After an undeserved loss that sees Fiorentina slipping out of the Champions League, the viola travel to their Tuscan neighbors, a trip that has had extreme highs and extreme lows in the past. Fiorentina are off to the other Stadio Franchi to face Siena. As the season winds down there is an air of change on the pitch, off the pitch, and here at ViolaNation... 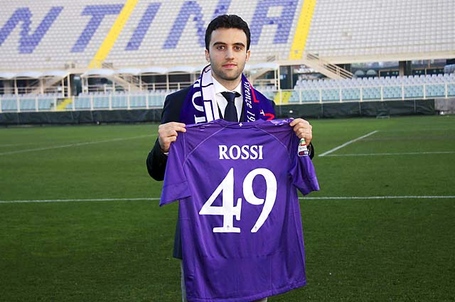 Just as Osvaldo giveth 5 years ago, he taketh away this year, ironically against Milan. Fiorentina see their grasp on third slip away and Milan escape with three match days left. Fiorentina were still allowed a consolation as Roma's unexpected home defeat to Chievo give Montella a chance to solidify the Europa League and fourth place. Fiorentina face a trip to their Tuscan neighbors in Siena, a match that saw the viola once dominate and then heartbreakingly fall down under slim margins. Although it is considered a friendly Tuscan derby, the cities of Florence and Siena have always been historical rivals.

The biggest story of tomorrow has been the inclusion of Giuseppe Rossi, taking his place within the viola ranks for the first time. With Ljajic out two days for insulting the ref, Montella has had to switch around the ranks and start with ex Siena man Larrondo while a knock to Aquilani sees Migliaccio returning to the starting XI. The bench also hails the return of Roncaglia and Wolksi, both who have recovered from their knocks.

After a difficult season, Siena are once again fighting for survival. They face a difficult finale as after Fiorentina they travel to Napoli and then to Milan. They have had a balance of 6 wins, 6 losses, and 5 draws at home. Despite their troubles, they have a revolutionary star in Innocent Emeghara, the Nigerian that knocked over Lazio and Inter earlier this year. With seven goals since his arrival in January he has brought new promise to the regulation bound team.

Montella will show up in Siena with Viviano covered by Savic, Gonzalo, Compper and Pasqual, who will support Migliaccio, Borja and Pizarro behind Cuadrado, JoJo and Larrondo. Rossi will start from the bench and a short second half appearance might almost be certain. Aquilani and Sissoko are ruled out while Tomovic and Ljajic sit out suspensions.

Ex Viola and now coach Iachini will start with a 3-4-2-1 with Pegolo in goal supported by Terzi, Terlizzi, and Teixeria. In midfield, Rubin, Vergassola, ex viola Della Rocca, and Angelo will support Sestu, Emeghara, and Rosina.

Fiorentina were unlucky last week and it is hard to fault the team for a very unfortunate loss. With Europe right at the door, expect the team to shift into high gear to end the season with a bang.

So before I close out this preview, i'm making an official announcement. After three seasons as a blogger first at the Offside and here at Viola Nation, I feel it's time that someone else have the joy of writing for this site. After the last match of the season, I will be leaving my position as a blogger and although i'll continue on this site as a commentator, I feel it's time that someone new be able to express their passion and love for this team. I realize that over the last few months, there has been a noticeable drop from my posts, and the mid-week posts have virtually disappeared. I feel this site and this team deserves much better and with my time and energy i can no longer continue putting out superb quality work every week. I love this team, I love this site, I love the family we've built here and I want someone to have the opportunity to share their passion as I did. My only regret is that I won't get the chance to write a European post, but seeing how much dedication everyone puts into this team, I can only hope to see where this going to go. I'll be talking over with my awesome partner slakas, who will remain as a blogger through next season about how we're going to proceed with the new blogger but thank you everyone for the support and dedication that you've put into this site over these three seasons.