As Fiorentina keep the pressure on Milan's heels, they face their final test of the season as they welcome a somewhat weakened Roma to the Franchi in a match that could be crucial for the viola's Champions League hopes. 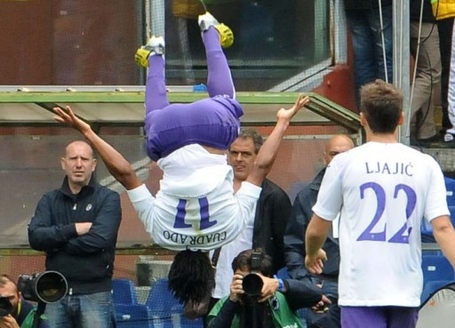 Fiorentina's hopes of reaching European football are practically almost sealed. Their fate with Milan is intertwined with 3 of 4 matchups and following a rousing win with Sampdoria last weekend, Fiorentina are ready to rock the Franchi as the season nears its curtain call. With their season having fell behind, Roma are stretching at what they can and are practically playing for pride, as their rough season calls for many changes over the summer. One of the stories is Osvaldo, the rebus of the group who might find himself once again playing in front of his former fans next season.

With Roma 6 points behind, they have a slim chance depending on a wide variable of conditions, but their time for reaching fourth is quickly slipping. Their season was defined by the disorganized attacking football of Zeman and they've enjoyed a mini revolution under Aurelio Andreazzoli, who could be on his way out this summer in favor of Max Allegri. Their scoring has been top notch led by Osvaldo and Lamela with 15 goals followed by Totti having racked up 12 himself. Andreazzoli has been able to recuperate his key pieces who will feature in the starting lineup.

It's a battle of the exes of sorts, not only for Osvaldo but also for Montella, Aquilani, Pizarro, Balzaretti, and Lobont. Over the last few weeks, we've seen the attack be caught by the Serbian revolution that is Adem Ljajic, himself scoring 7 goals since the turn of the year. As the end of the season gets heated, so do the transfer rumors. The mills were swirling around Fali Ramadani and a supposed encounter with Juventus who are said to be eyeing JoJo, Ljajic, and Seferovic. There are no confirmations to the meetings but Ramadani will be in the stands for the match tomorrow so an encounter with the Della Valle's isn't out of the question. ADV has announced he would prefer to keep Jovetic or send him packing to England while Montella holds pieces like Ljajic and Cuadrado in high regard and with the want of the players, anything less then a mega sum is improbable. In the incoming market, the father of Pierre Aubameyang has said that he is planning an encounter with Prade and Macia while there is no news on the front for Jordy Clasie.

Fiorentina are also working on contract extensions, however there are rumors swirling on Luca Toni who might play out a final season in Sassuolo before returning to Fiorentina to join the board. There is also still buzz on the return of Martin Jorgensen who is looking to start tying the ends of his career with Aarhus. Another piece is David Pizarro who depending on the capture of Clasie who would have the ideal mentor in the Chilean.

For tomorrow's match, Montella has to do without Roncaglia or Savic but is keeping the lineup he sent to Genoa. Viviano will start with Tomovic filling in for Savic and Compper filling for Roncaglia with Pasqual and Gonzalo. Aquilani, Pizarro and Borja will cover Ljajic, JoJo, and Cuadrado.

Andreazzoli with start with a 4-2-3-1 featuring backup Lobont in goal, supported by Torosidis, Balzaretti, Marquinhos, and Burdisso. He was able to recover De Rossi who will start with Bradley and support Lamela, Totti, and Florenzi behind Osvaldo.

Despite the odds, Fiorentina have a very special man in Compper who has served both as a lucky charm and also as a more than capable defender. The key to this match will be in keeping a steady and flowing midfield while denying Roma any space up front. They'll try to rush the goal but keeping and regaining possession will be the key to a successful match.