With our feet firmly placed in Europe, it's time to hope for the upgrade, but it's also time to cap an absolutely amazing season, time to say goodbye to familiar faces, and time to breathe new life into our community. 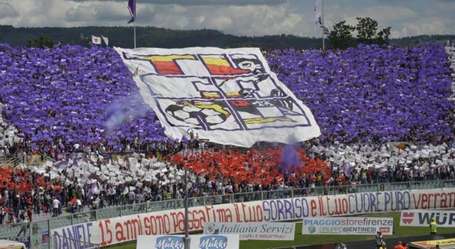 The final day of the season always has that awkward feeling. Maybe because everyone feels like they're already on vacation, table spots are fixed, regulations has already happened, and each teach feels like they're playing for keeps. For Fiorentina and Milan this isn't the case. With -2 points separating them on the table, Fiorentina place their hopes on Tuscan rivals Siena to slow down Milan as they hope with the slimmest of Margins to make their way into Europe's premier competition next season.

Fiorentina have already qualified for the Europa League, a competition that under Prandelli they stormed through in 2007-2008 coming within shouting distance of the final but falling to a resilient Glasgow Rangers side. It's been a season of extreme highs: a 4-1 win in Milan and a complete destruction of Inter at home. A match with Juve at the Franchi where Fiorentina held back the bianconeri only to be denied by the crossbar. The building of a new team, the promises mantained by Della Valle, the signing of Giuseppe Rossi, and of course the return of Luca Toni, scoring within minutes of his return to the Franchi. It's been powerful and emotional scenes: The goodbye to Mario Ciuffi, Romulo's 93rd minute goal against Torino, the way the team roared back after a difficult start to the year. It was the year that Adem Ljajic exploded into a leader, Fiorentina realized that they are just as good without JoJo, and the three tenors became a household name. All in all, no matter what happens this is a year to celebrate and frame.

With a 1-0 win at the Franchi over Palermo last weekend, Fiorentina will play their match and only hope for a break from Siena. Pescara is the same team that humiliated the viola at the Franchi earlier this year and Montella is determined not to have a repeat performance. Pescara sit dead last, already regulated, and holding on to 22 points accumulated over 39 match days. At home they have accumulated 13 losses, 1 draw, and 4 victories. Despite their disadvantage, they have been able to breed a superstar goalkeeper in Mattia Perin and their scoring has been led by Mervan Celik, Vladamir Weiss, and Gaetano D'Agostino.

Montella is not holding anything back as he sets his usuals to ensure that the summer begins on a high. Viviano will take the goal behind Gonzalo, Roncaglia, Compper, and Pasqual ahead of Aquilani, Borja, and Pizarro who will cover Ljajic, Jovetic, and Cuadrado up front. It is almost certain that Giuseppe Rossi should make a small cameo appearance at some point in the second half.

Bucchi will start with Perin in goal covered by Bocchetti, Capuano, Cosic, and Zauri while Togni and Biasi cover Celik, Bjarnason and Rizzo ahead of Sforzini.

The combinations for the Champions League mean that Fiorentina have to win and Milan cannot lose or draw. If the Rossoneri manage to come on level points, Fiorentina will go ahead on direct matches having won 4-1 at the San Siro and drawing 2-2 at the Franchi.

With that, I come to the close of a grand adventure with you all. Thank you for three incredible years of supporting our site, supporting our writing, and supporting this amazing community that we've built. It's been an honor and a pleasure to write for you all, it's been an honor to share every match together, and I look forward to continuing here as a commentator and excited to see what the next person is going to bring to our site. Thank you all for making me look forward to every Sunday, and especially especially thank you to my awesome partner, slakas for all your fantastic work. I'm looking forward to the summer and looking forward to sticking around as our beloved viola take the purple marching through Europe.

For the final time: