There are very few special matches like the one tomorrow. It's going to be a day of firsts and a day of lasts. With Peptio Rossi finally match fit, he is likely to see his first match in viola. For others, it might be a last salute at the Franchi. It's going to be a day to cap and celebrate a successful and triumphant season, and it's all going to be presided by former viola legend Cesare Prandelli who is expected to be in attendance. 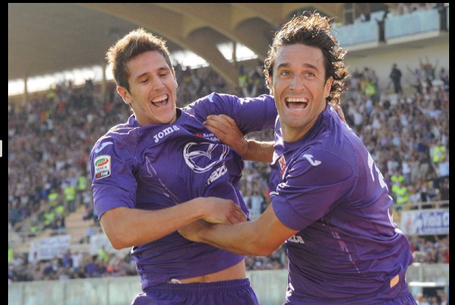 Very few matches have as much significance as the one tomorrow. It is a day to celebrate the return to Europe, the beginning of a future viola star, and the last chance for familiar faces to run under the Fiesole. Over the emotional and symbolic scenes is the return of Cesare Prandelli, the legendary manager who ran his viola for five seasons and with the last remnants of his era still on the field, it might represent the turn over to Montella's Fiorentina. Palermo are fighting for survival after a dismal season. They are far from the team that terrified half of Italy only two seasons ago, and with volcanic president Zamparini threatening to boycott the lunchtime match after his hundreth coach switch, they have become Serie A's favorite running gag.

The big story this week is who will be in purple next season? Montella confirmed himself just today as remaining in viola colors 100% for next season, as well as confirming the three tenors Borja, Pizarro, and Aquilani. Pasqual looks set to stay as captain as well as Gonzalo, Romulo, Savic, and Tomovic. Less certain is Roncaglia. After a mythical first half of the season, he has teetered on the ledge of bench and stands as his performances raised a few troubling questions. Llama will not stick around another season. In the attack, Montella wants to keep Ljajic at all costs, who has exploded into form in the second half of the season, while Toni endeared himself to the fanbase, offering to remain "if Florence wants him." El Hamdaoui looks less certain while Prade is finalizing a deal to keep Cuadrado with all signs looking at the Colombian to remain on the Arno. Larrondo is still in the balance while Sissoko is most likely headed back to PSG and Migliaccio possibly headed back to Palermo. Viviano's future won't be decided until the summer but he prefers his native Florence.

And then there's JoJo. Fiorentina want nothing less than 30 million in cash for the Montenegran. Juventus are asking for a discount and offering one between Giovinco, Quagliarella, and Matri in return. Aside from Juve are Manchester City, Chelsea, and Arsenal as well as Bayern Munich making passes towards Prade. Ramadami is getting ready to arm wrestle the Della Valles over his clients while Fiorentina look towards their JoJoless future.

Tomorrow is set to be a special match in every sense of the word. After a 1-0 win over Siena in midweek with Gonzalo bagging his sixth goal of the season, remarkable for a defender, Fiorentina need very little to reach the Europa league and a win will seal the deal. To remain in Serie A, Palermo need to win and hope that Torino and Genoa lose as well as winning again next weekend when they take on Parma. They've done quite well in recent weeks, first making Udinese nervous but ultimately losing at home, doing well against Juventus and falling only to a Vidal penalty, and defeating Inter at the Barbera in midweek. They have high hopes going into the end of the season but will be missing a key piece in the form of Ilicic who will be sitting this one out.

Montella is setting back the clock and going back to a 3-5-2 with Viviano in goal covered by Gonzalo, Roncaglia, and Savic. Matigol will take the place of Aquilani who will start from the bench and join Cuadrado, Pasqual, Pizarro, and Borja behind Toni and Jovetic who will likely leave way to Rossi in the second half.

Sannino's Palermo will start with Sorrentino in goal covered by Von Bergen, Donati and Aronica. Morganella, Rios, Faurlin, Kurtic and Garcia will back up Fabrizio Miccoli and Abel Hernandez.

It is most likely going to be an emotional afternoon at the Franchi. A day of memories and good days to come. Let's make this a special one.