Calm and cold blood. After a suffered win over Torino that has brought the viola to the cusp of the Champions League, Fiorentina need to keep up the pressure and be ruthless as we go into the final stretch of matches. Over the week, Florence was graced with Batistuta showing up for a tour of the city. Could it be a good omen? 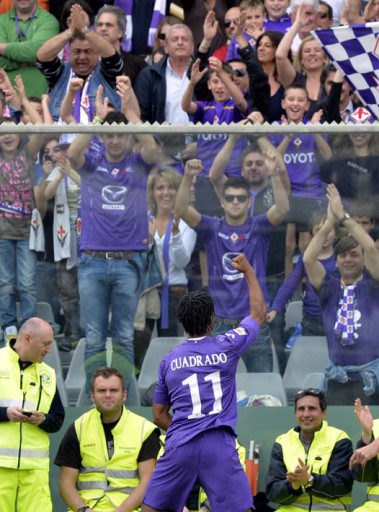 The Lion King returned to Florence this week. Gabriel Batistuta unexpectedly showed up and checked into his hotel near Piazza Stazione, which sent the city into a frenzy. Although a much wanted meeting with Fiorentina never happened, several players, including home fan Viviano managed to find him and snap a few pictures.

It was an auspicious start to the week as Fiorentina head into a crucial series of matches as they head to the tricky Marassi to take on Sampdoria. Last week, in one of the most spectacular matches of the year, Fiorentina took the lead through Cuadrado, Aquilani and Ljajic, before feeling a double ex sting with Cerci and Santana and a knockout through Barretto, leveling at 3-3 just before the end. It was left to afternoon hero Romulo who slotted in the 4th in the 86th minute and brought Fiorentina to -1 point under Milan. Both Fiorentina and Milan have tough matches ahead. Milan play Catania tomorrow who are always capable of surprises, while both teams have yet to face Roma. The tough job is done of keeping the lower teams away as Fiorentina hold a comfortable distance, and Montella can count on Jovetic who returns from injury to face a Sampdoria that frustrated the viola at the Franchi earlier in the season.

Sampdoria sit comfortably in midtable but have taken some hits as of late. They lost at home to Palermo last weekend, drew with Genoa and Bologna but managed to hold Napoli to a draw at the San Paolo and rout Roma 3-1 at the Marassi. Their other claim to fame this year was holding Milan at home and defeating Juventus in Turin. Undoubtedly their star has been Mauro Icardi who has attracted the eyes of the giants (and Prade included). Unfortunately they will have to do without tomorrow, even though they welcome back Eder to the fold.

Montella is starting with the lineup he took to Torino, welcoming back Gonzalo but losing Roncaglia to injury. He's going back to the 4-3-3 with Savic, Tomovic, Gonzalo, and Pasqual in front of Viviano, covering the three tenors Aquilani, Borja, and Pizarro and Ljajic, Jovetic, and Cuadrado up front.

Sampdoria start a 3-5-2 with Romero in goal covered by Mustafi, Palombo, and Gastaldello, while Estigarriba, Munari, Obang, Poli, and De Silvestri cover Maxi Lopez and Sansone.

The big news this week was Giuseppe Rossi started full training with the team. He will not be available for next week against Roma but could return for Siena and Palermo. In market news, Prade and Macia are refusing to give Cerci fully away for any less than 9 million while they are reportedly preparing a 13 million plan to bring Osvaldo back to the Franchi. Unfounded rumors have also seen them making a plan for Fernando Torres who Macia had originally brought to Liverpool. The usual rumors surrounded Ljajic and JoJo this week while Udinese are ready to fully give up the rights to Cuadrado. The silence has been on the goalkeeper front but rumors have it that they have a plan set for Viviano as well.

Obviously the main dangers for the match lie in Maxi Lopez, Sansone, and Poli. The welcome exclusion of Icardi gives Fiorentina a breath of respite but blowing 3-0 leads isn't going to help the situation. With Milan caught in their affairs, it's the right time to take the lead.