As Fiorentina attempts to steamroll its way to the Champions League, it comes down to a trip to Cagliari, a team that has seen a series of bizarre events this season, plays in a half working stadium, and although seemingly safe for the rest of the season is trying to finish in mid table.

Share All sharing options for: Chaos in Cagliari: Cagliari-Fiorentina 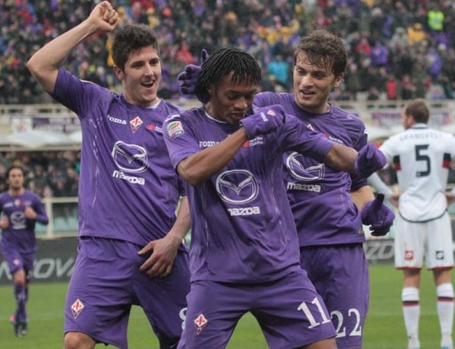 Cagliari's season has been...interesting. Their stadium was deemed safe, then unsafe, then half safe, then for season ticket holders only, and then closed. They've been forced to play games on neutral grounds, behind closed doors, and to season ticket holders only. Their president, Serie A's second in command nutjob started a riot in the city when he called on all the fans to show up to the stadium even though it wasn't going to be opened, and then was later arrested and later refused his own release. Cagliari itself has done quite well considering their circumstances. They languish just above the drop zone but with 35 points they are relatively safe. Marco Sau has been burning the charts with 11 goals to his name as well as Victor Ibarbo and Daniele Conti. Their home record is pretty even with 5 wins, 5 losses, and 4 draws.

After a hard fought win over Genoa, Fiorentina are taking a step back before next weeks crunch match against Milan. Montella is planning a mini turnover to save his favorite set pieces as each of the starting defending line of Savic, Pasqual, Gonzalo, and Tomovic are under yellow card warning. It is almost certain that Roncaglia will start from the first minute. In a week that has been turbulent on the field and in the press, Fiorentina's men seem to have returned unscathed, and Montella might have some room to play around with some options tomorrow.

Cagliari has had a strong showing in the second half of the season. They held Milan to a draw on the island, defeated Roma 4-2 at the Olimpico and saw off Sampdoria 3-1 at home. Although they aren't contenders for major positions, they have been known to make the most of frustrating teams.

The big missing piece this week is Borja who sits off a 1 match yellow card suspension who will be subbed by Migliaccio. Viviano will start with Roncaglia, Gonzalo, Savic, and Pasqual, all under yellow card warning, with Pizarro and Aquilani joining Migliaccio who will cover Jovetic, Cuadrado, and Ljajic.

Ivo Pulga starts with Agazzi covered by Murru, Astori, Rossettini, and Pisano, while Nainggolan covers Edkal and Dessena behind Cossu, Ibarbo, and Sau.

For the record, Fiorentina have never lost behind closed doors, the last coming in 2007 with a 2-0 win over Udinese (Pazzini, Reginaldo) and a 1-0 win against Catania (Toni). Cagliari have been strong, but it remains to Fiorentina to break the silence.