The viola pulled out all the stops last week in Rome as they came to a 2-0 victory against the Eagles, and jumped Inter and Lazio for the 4th place position, and only 3 points away from a Champions League spot. With Genoa this week, and Milan after the international break, Fiorentina have the chance to soar, they just have to make the most of it.

Share All sharing options for: Starting the Final Stretch: Fiorentina-Genoa 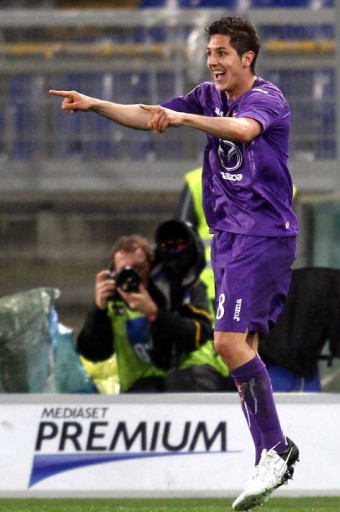 After a shaky start to 2013, it seems like Fiorentina has restored confidence, and with a reborn Ljajic, a JoJo who is finding comfort in the center, and the three tenors going like clockwork when they're together, Florence is flying to a Champions League position. Yes, there is still a long season to finish, but things are looking more certain as the team not only grows on the field, but with each other as well.

As Fiorentina fans know, Genoa is a running joke among the viola. Their summer transfer lists consisted mainly of what ever their southern neighbors were looking at, and with prying away Gilardino, Frey, Dainelli, Vargas, and Cassani, they became known as the pit stop to many a viola's twilight years. Genoa have been deeply suffering this year, with their president suspended, and lingering above the drop zone as the mighty Seba Frey, who will not be making the trip to his former grounds, suffers in front of a weak and unstable defense. That's not to say though that Genoa have the potential to surprise. Their road form has been miserable, only winning two outside of their home, but they've been able to frustrate Juve and Inter to draws as well as winning in Rome against Lazio. However they are without star striker Marco Borriello this week who is handing duties to young upcomer Ciro Immobile who could very well be a threat.

Fiorentina's mobile 4-3-3 is working like a charm. Pasqual has had his best week in and week out run of form in years, Ljajic is finally exploding, and the front three are working as hard as the three tenors in mid. Defense is still a bit shaky from time to time as too many defenders (particularily Gonzalo and Savic) have the habit of moving too far forward as they attempt to make the team rise. It is a noble effort, but unsettling when it leaves the team open to counter-attacks, something Fiorentina historically has trouble defending against. Genoa has always suffered in Florence, and Fiorentina have built a strong wall around the Franchi, yet as we've seen this year, any run of great form can come suddenly crumbling down. It's important to keep heads one game at a time to the end of the season.

Montella welcomes back Aquilani to the fold as he confirms 10 of the 11 that went to Rome last week. Roncaglia is again on the bench as Viviano starts in goal covered by Gonzalo, Tomovic, Savic, and Pasqual, the three tenors come together as Borja joins Aquilani and Pizarro who cover Ljajic and Cuadrado with JoJo in the center.

Ballardini is missing Frey and Borriello, and he goes for a 3-5-1-1 with Tzorvas in goal covered by Granqvist, Portanova, and Moretti. Ex man Cassani joins Kucka, Toszer, Vargas, and Antonelli, while Bertolacci joins Immobile.

Obviously missing Borriello is a big advantage, but look out for strong players like Immobile and Kucka, while Vargas would sure want to make a lasting impression on his former fans. If we keep this great run of form, a European spot can't be too far behind.