Fiorentina head back to Rome to face Lazio. After a narrow but ultimately ugly win last weekend, they're back on the winning track. The question is: which Fiorentina is going to show up tomorrow? 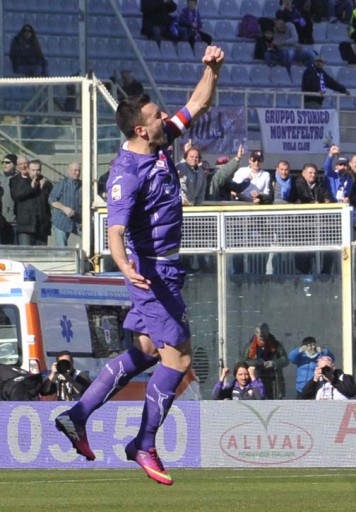 Fiorentina narrowly squeaked through a determined Chievo side last weekend with Pasqual and Larrondo finding the back of the net. Despite the win, it was an ugly week for the viola as questions were raised about the overall performance, and rumors swirling around JoJo's subsitution. The standoff was broken this week by the announcement that Prade and Macia, who don't see any time for not looking on the market, had opened negotiations for winger Oleksandr Iakovenko from Anderlecht. Still, Fiorentina's quest for third place takes a crucial turn this weekend as they face fellow Champions League contender Lazio, in a match that could decide who is flying at the end of the season. Fiorentina have the opportunity to jump to 4th place and pip Lazio who played midweek and will go without injured viola villain Klose, and the suspended Candreva.

Lazio played in Stuttgart midweek and took a 2-0 first leg, while last week they were steamrolled in Milan with a 3-0 drubbing. They have been strong at home this season, winning 14 and only losing 2, while Fiorentina's road performance this season leaves much to be desired even though Fiorentina thoroughly defeated the Eagles at the Franchi. The question would be, which Fiorentina is going to show up? The one that destroyed Milan and Inter, or the one that clearly suffered a lack of confidence in 2013. Fiorentina will have to do with two tenors as Aquilani is disqualified, and El Hamdaoui suffered a back problem in midweek. Fiorentina are looking to welcome back Roncaglia to the starting XI while Migliaccio will pip Sissoko to Aquilani's replacement. Cuadrado is set to return alongside JoJo and Ljajic while Luca Toni will go back to the bench. ADV and DDV both visited the squad and at least one might be at the stadium tomorrow afternoon. Reportedly there will be a special visitor in the form of Del Bosque who will be in the stands to observe Borja Valero.

Lazio tend to bounce in terms of form. They've played to 2 wins and two draws in the return leg recently falling to Chievo in Rome. Although their European form is top, they've proved to be roughed up after returning home, and it can only be hoped that Fiorentina can exploit some of those weaknesses. Lazio show up with Marchetti in goal, covered by Radu, Dias, Biava, and Pereirin. Hernanes and Gonzalez support Lulic, Ledesma, and Mauri behind Floccari.

Montella will confirm the 4-3-3 with Viviano covered by Pasqual, Gonzalo, Roncaglia, and Savic. Migliaccio will play on the wing with Pizarro and Borja who will support Cuadrado, JoJo and Llajic. Fiorentina will welcome back Mati Fernandez to the bench with Sissoko and Toni.

With Roma having drawn against Udinese, Fiorentina have the opportunity to jump Lazio, and step away from the pack while the last two months of the season draw near. With all the flak the viola have taken in recent weeks, its a golden opportunity if they're willing to take it. A mistake could see Fiorentina and Roma fighting for the Europa League. It's an opportunity for JoJo to turn on the gas again, whether his summer plans have been made or not, he needs to show up in fine form tomorrow.