Juventus: I Hate Everything About You

Share All sharing options for: Juventus: I Hate Everything About You

I hate their coach. I hate their fans. I hate that they have the Scudetto on their chests AGAIN. I hate EVERYTHING about them. I want nothing more than to have MY team beat THEM tomorrow.

Unfortunately, the odds are very much against that happening, but it's Calcio and you never really know until the final whistle.

If Fiorentina are to pull off a miracle, they will have to do it with another patched up lineup. Alberto Aquilani and Giulio Migliaccio are unavailable due to suspensions, while Mati Fernandez is still out injured. Juan Cuadrado and Nenad Tomovic had midweek games for their national teams, Cuadrado traveling all the way to Miami and back, but both were in training today and Cuadrado, at least, looks likely to make the start. Romulo looks likely to start in Aquilani's spot.

Emiliano Viviano, coming off an excellent start last week, should start again, with Facundo Roncaglia, Gonzalo Rodriguez and either Stefan Savic or Tomovic in defense.

Vincenzo Montella, in a press conference today, hinted that other change may in store as he commented on Mounir El Hamdaoui excelling in practice this week, fueling stories that he may get the start over Luca Toni, next to Stevan Jovetic who will surely start, fresh off of scoring a goal for the first time this year.

That Jackass, er Juventus Coach Antonio Conte also faces some challenges, as 12 of his players were out on National duty. However, everyone except Asamoah, playing at the Africa Cup Of Nations and Leonardo Bonucci, suspended, will be available. Fatigue might play a factor for some of the older players.

Add in the revenge factor. Fiorentina stopped the long Juventus win streak early in the season and Juve is sure to want to make La Viola pay for that.

Another large factor in the match could be the officials, as it always seems to be when Juventus take the pitch. 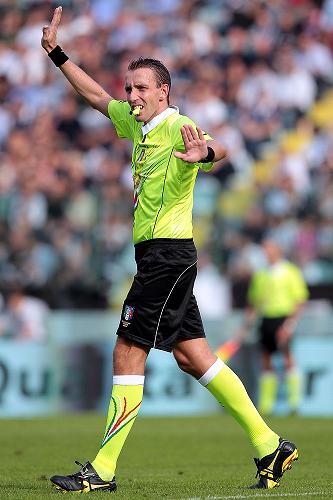 Those of you that spend some time here know quite well how little regard I hold for most Italian officials. Tomorrow's lead official Paolo Mazzoleni is one that I hate more than most. He is AWFUL. His record also leans way in the favor of the team in black and white. In 9 matches that he's done for Fiorentina, La Viola have won 3, tied 3 and lost 3. In 12 matches Mazzoleni has done with Juventus, only 1 loss, plus 7 wins and 4 draws.

All that being said, in the first match, Fiorentina proved themselves to be a team that could match up with Juventus and nearly beat them, and that match was also without Aquilani.

So, as they say, anything can, and probably will happen, but regardless out the outcome:

I will still hate everything about Juventus.