After a historic 4-1 win over Inter last week, Fiorentina travel to newly thawed Bologna in a potentially tricky derby that sees the viola having the opportunity to launch themselves back into the top four. A win tomorrow could determine Fiorentina's season. Anything else could see them grasping desperately for Europe. 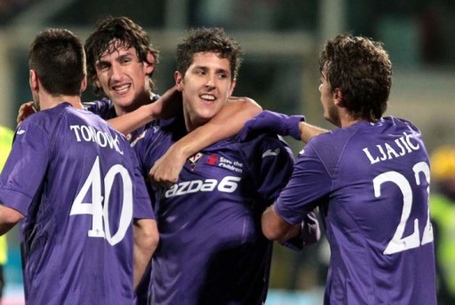 With Napoli, Inter, and Milan picking up minimal points this weekend, Fiorentina have the perfect opportunity to take themselves up into the top four as they head to the tricky Bolognese grounds to take on an ambitious but low flying side. It's a battle of ex's as Viviano faces Gilardino. It's Fiorentina's golden opportunity to launch a dominating set of games that saw them soar through the first half of the season. With Chievo at home next week and Lazio the week after, Montella has his work cut out for him.

Bologna have a fair home record, frustrating many teams with draws and only losing three times at their grounds. They are spearheaded by the attacking trio of Gilardino, Diamanti, and Kone with 21 goals between them. Kone famously stripped Napoli bare twice in a week earlier in the season with two late minute goals, something Bologna have shown a specialty for this season.

Fiorentina have re-found Jovetic's magic form (at least last week) as he and Ljajic made a superb combination with a four man mobile backline and an advanced Cuadrado. David Pizarro's attraction to the color yellow has left him yet again on the sidelines as Montella picks between Sissoko and Migliaccio, with the former Palermo man slightly in the lead for the start. Roncaglia is still serving a punishment of sorts as he hasn't even been called up to the bench this week and gets bumped out by Compper.

Montella shows up with the same 4-3-3 that he brought against Inter. Pasqual will once again move up and switch between midfield and defensive duties while pairing up with Tomovic, Savic, and Gonzalo. Aquilani, Borja, and Migliaccio set farther behind will support Ljajic, Cuadrado, and JoJo.

Rumors are saying that Roncaglia and Fernandez picked up a mystery knock midweek, but there is some speculation as to why they are still far from the starting lineup. Once the heat starts to wear off, maybe they can get a second chance at proving the worth to remain in Florence.