A change of attitude, a change of heart, a change of formation, a change of players, and the return of Diego Della Valle make for a spectacular night as one of the best Fiorentina formations of the season brings Inter to their knees. Adem Ljajic and Stevan Jovetic get on the scoresheet with a brace each, while Antonio Cassano nets a sublime consolation goal.

Share All sharing options for: The Balkan Blitz: Fiorentina 4 Inter 1 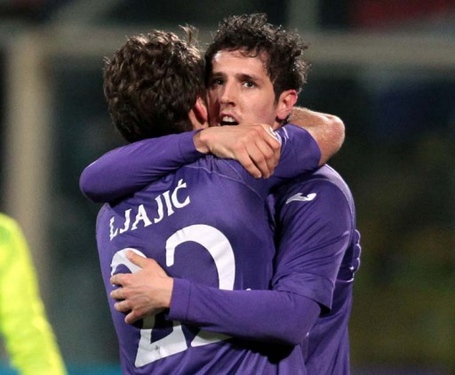 The changes were coming. After games with much play and no result, Montella finally switches things around, adding a four man backline and a three man attack which produces one of the nearly perfectly played games of the season. Montella moved Stevan to the centerforward position flanked by Cuadrado and Ljajic in for Toni while Tomovic stepped in for Roncaglia. Manuel Pasqual was given double duty tonight, alternating between the defense and the field, while Aquilani moved into a wider position. Fiorentina put the pedal to the metal as soon as the ball had started rolling, and by the end, even the Fiesole faithful were reminding the nerazzuri what they were chasing after.

As soon as the ball had left the center field, Pizarro found JoJo who struck a scintillating ball that put Handanovic into difficulty. Fiorentina's midfielders were crowding Inter's defense, forcing them to open miles of space, while Cuadrado and Pasqual were finding easy crossing space. Nearly twelve minutes into the half, Pasqual found Jovetic who lobbed the ball over to a diving Ljajic. Adem looped the ball over Handanovic and sent the Franchi into delirium. 1-0 viola. Not even five minutes later, JoJo again found himself alone with the Slovenian keeper who pushed a tough ball away with his feet. Inter tried to retaliate as Kuzmanovic, at his first return to the Franchi, shot a long ball that just barely missed the post. A minute later, Gonzalo took a classy stop against Palacio and returned Fiorentina's dominating possession. Half an our in Aqulani found JoJo at 23 meters off of the goal and Stevan beamed the ball right into the back corner. It was the kind of finish that fans had been waiting a long time for, and after a series of shots from Borja, Aquliani, and Cuadrado, the viola went into the half on a cushion.

The second half rolled with Inter switching Alvarez for Kovacic, while Pizarro found Cuadrado who sent Handanovic to the ground once again. Ten minutes later, a cheeky twist from Aquilani liberated Jovetic in front of Handanovic who slid the ball right into the net and set himself up for the brace. The fans were in a frenzy and the "Ole"s commenced. It was partytime at the Franchi. Fiorentina were rolling the ball back and forth between themselves while the monotomy was broken with Nagatomo making a deep run but finding himself crowded by the viola defense. Two minutes later, Ljajic once again found himself with acres of space and sent a rounded shot back into the Inter net, giving the viola the 4-0 and his first brace in purple. Pizarro was taken off to a standing ovation to welcome the newly arrived Momo Sissoko while Jovetic made way for El Hamdaoui and Cuadrado gave way to Llama. The subs didn't do anything of note, but the final act of the night was to Antonio Cassano who launched a spectacular long ball that beat Viviano for the consolation goal. Fiorentina had one last act with Llajic having the chance for the hat trick but he sent the ball wide while Rizzoli blew the whistle to end the match.

Viviano 6 - He was a spectator for most of the match and couldn't do anything about Cassano's goal, but found himself alert when he needed to be.

Tomovic 6 - He links up well with Cuadrado, keeps Cassano in check, and picks up loose balls.

Gonzalo 7.5 - Sublime defending from the Argentine who denies access to Guarin and Palacio.

Savic 6.5 - Keeps Palacio quiet and moves seamlessly between the wing and the center.

Pasqual 7 - He runs between the midfield and the defense and it's his invention that launches the 1-0.

Aquilani 7.5 - Tenor #1 is awake, active, and creative. His cool heel trick launches JoJo's second goal and he takes quite a few shots himself.

Sissoko 6 - doesn't make much of an impact on the game but needs a bit of passing work.

Borja 7.5 - Tenor #3 has a half point saved for the goal that never came. However he plays every position imaginable with elegance. He makes the team rise, this is the definition of the perfect midfielder.

Cuadrado 7 - Wins his duels with Nagatomo and takes one shot after another with Handanovic. Unfortunately he's blocked off but his dribbling is intoxicating.

Jovetic 8 - The champion returns. Two goals, taken with precision, timing, and aiming. He is the nightmare to the Inter defense. He takes his shots with coldness and is instrumental in the assist for the 1-0. Wonderful.

El Hamdaoui N/A - he comes in at 4-0 and only manages to free a shot once.

Ljajic 8 - His best game in viola. He has a conviction like no one has ever seen. Gone are the days of chocolate and video games and he launches himself with grace and creativity. He supports JoJo and takes any opportunity he can. He rounds off the match with a looping goal from outside the area.

Montella 8.5 - He switches things around with a modified 4-3-3, takes risks in launching Tomovic and Ljajic, but it pays off and Fiorentina play one of the matches of the season.

Diego Della Valle 10 - He returns to the stadium, JoJo scores a brace, and Fiorentina win. It's not a coincidence.

Fiorentina have a great opportunity to climb the table as they head to Bologna next weekend before hosting Chievo at home and then away to Lazio. Is March comeback season?