Fiorentina took a step back last weekend against an in form Juventus, that saw Facundo Roncaglia face the chopping block as the mythological defender slowly fades into scorn. The JoJo crisis continues as fans question if they really want him on the team. Anything could happen tomorrow as Fiorentina welcome Inter featuring former viola and current leader of the school of terrible shooting Zdravko Kuzmanovic back to the Franchi. 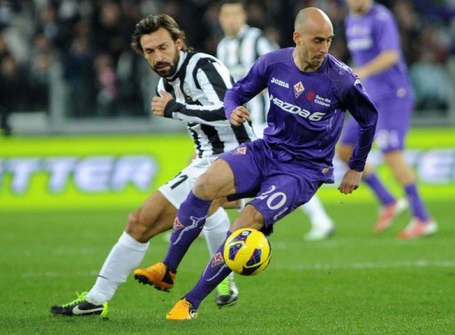 We love our team. We love to idolize them. We love to think they are invincible, can do no wrong, and can win any game. Fiorentina fans are facing facts in the last few weeks as a series of dismal results, broken by a win against Parma, sees Europe slipping farther away. The question Fiorentina fans are asking is: Could the favorites be the ones to blame?

Let's start with the head man himself. Stevan Jovetic has been the faithful #8 for several seasons now. He'll be remembered for his spectacular 2009-2010 season, the match against Liverpool, and the guiding light of the team. Ever since his season on the sidelines, JoJo has become the chiaroscuro of the renaissance city. A figure clouded in shades of brilliance and shades of black. His current form beckons some of the darkest parts of his purple career. The season started brilliantly with a comeback against Udinese and it looked like Stevan was on the shining path once again. But as the figures in his worth rise, the scouts come calling, and his head is misplaced in the newspapers, JoJo is scarcely the player we know. Brilliance gives way to egotism. He's become rash, impatient, some might say impulsive. Shots are chosen at random, or by some lucky floating ball to his feet. He fails to find Toni, even if the big man is completely open. JoJo has simply become unrecognizable. He still has worth, but with Prade and Macia introducing new talent and scouting around for his position, many are wondering: Maybe it's time we cash in.

The other major figure in this story is Facundo Roncaglia. Up to December, Facundo took a mythological presence in the Fiesole faithful. He was the indestructible powerhouse with the Eurogol shot. Facuno was praised by the internet, sought out as soon as December, and allowed to become the irremovable piece of the viola defense. Which brings us to the key word here: defense. Facundo loves to run. He loves the wing, he loves popping up in front of goal when he can. Problem is what is he doing there? Last week's howler, heading the ball directly to Vucinic illustrates a disturbing trend in the sleepy viola defense as of late, starting with Pescara. More and more, viola defenders are moving into Zemanesque kamikaze attacks, leaving the door wide open. Facundo as of late has lost too many men on his watch as he seems to be consistently out of position. This week, he appears to be paying the price.

Fiorentina and Inter are playing a direct competition for fourth place. Both on a season of ups and downs but Inter currently holding the high card. Inter played in midweek and suffered the loss of consistent Fiorentina scorer Diego Milito, so Fiorentina can use their tiredness to an advantage.

Montella has decided to put more firepower ahead, and has opted to bring in a 3-4-3 with Jovetic at the helm and Toni and Roncaglia paying the price. With Viviano in goal, Tomovic usurps Compper for Roncaglia's position next to Savic and Gonzalo. Pasqual and Aquilani will be on the wings with Borja and Pizarro while Jovetic takes center stage next to Ljajic and Cuadrado. The worry here is Jovetic has never played at the best of his ability in the center forward position, and personally i'd love to see El Hamdaoui over Ljajic. I'd even like to see JoJo take the blame for a week and be benched to try out some other attacking options.

Inter come to the Franchi with Handanovic covered by Zanetti, Nagatomo, Ranocchia and Juan Jesus while Cambiasso, Kovacic, and Gargano cover Palacio, Cassano, and Guarin.

Alternatively, Montella could go for a 4-3-3 and move Pasqual back to a classic left back position and debut a four man defense while Inter could substitute Cambiasso with Kuzmanovic. Montella could find use for Sissoko and Compper in the second half.

At this point: Anything can happen.