Not Quite Enough - Roma 2-1 Fiorentina

Fiorentina weren't quite enough today to get a result in Rome against AS Roma...

Share All sharing options for: Not Quite Enough - Roma 2-1 Fiorentina

Vincenzo Montella was once again forced to juggle the squad with David Pizarro unable to start and Borja Valero was slotted into the field general role and did not really fit the bill today. Valero's passing was remarkably poor with 14 negative passes recorded and frequently paved the way for Roma counters.

The seats weren't even warm when Gervinho drove the left side, as he seemed to be able to do at will today and slotted in a ball in front of the goal that defenders seemed to just stand around and stare at and goalie Norberto Neto lamely dove at, until Alessandro Florenzi skipped it over to Maicon, who was left sitting all alone in front of the net and calmly tapped it in for the early lead.

Montella also chose to go with Juan Manuel Vargas in the front line, rather than Joaquin, and that decision paid off in the short term, as shortly before the half hour mark, Nenad Tomovic drove along the back line and centered a ball that Vargas slammed into the back of the net to tie it up.

The first half ended without any other chances and it was fairly even at that point.

The second half started nicely for Fiorentina, as they possessed much of the ball and pressed forward, but chances weren't coming and the possession was interrupted frequently by strong Roma counters, requiring intervention from Neto.

One prime chance came for la Viola at the one hour mark as Alberto Aquilani was wide open in front of the box after a strong Cuadrado run and cross but the off form midfielder scuffed it wide with a pathetic attempt and wasted the chance.

The miss seemed to take something out of Fiorentina as Roma took over the match from that point, put lots of pressure on the Fiorentina end and finally took the lead, which they would never relinquish, on another Gervinho drive and a Destro shot.

Fiorentina had one more chance on a result on a free kick, but Morgan De Sanctis parried a fine free kick from Manuel Pasqual and that was the match, for all intents and purposes. Montella tried to change it up by bringing on Pizarro, Joaquin and Matos, but all to no avail and Fiorentina were left out in the cold.

Fiorentina remain in 5th place, but lost ground to both 6th place Hellas Verona and 7th place Torino and switch focus to the Europa League with the final match in group play coming up on Thursday.

Neto(6.5)- a little out of sorts on the first goal, but kept the match from being a rout by notching SEVEN saves. His defense really let him down on both goals.

Tomovic(5.5)- get's an extra point for a fine assist on the lone goal for Fiorentina but really was owned all match by Gervinho. Perhaps had too much focus on the offensive when this team needed defensive steel today.
Rodriguez(5)- was a big missing today in the middle. Roma had their way in the box. will need to do much better going forward.
Savic(5)- had a few saves in important situations but let Roma players just hang out in the box (Maicon) all match long. Need a lot more.
Pasqual(5)- way to concerned about offense, might as well not even have been there on the Destro goal. total spectator. Still could've tied the match if his free kick were a few inches more to the right

Aquilani(4)- missed a wide open chance to take the lead, scuffed a corner, just not what he is advertised to be. Easy to see why he didn't get on the pitch in the Premier League. He should be relegated to the reserve spot with Ambrosini or Fernandez getting the starts ahead of him.
Valero(5)- not his day at all. horrible passing game, not just missed passes but lots of the, leading directly to Roma charges. Just oges to show that he really isn't David Pizarro.
Ambrosini(5)- He does the dirty work, but really isn't much of a threat going forward. Still better than aquilani. went out for cramps.

Cuadrado(6) - still seems to be something mentally wrong with him, he sits and hold the ball and then passes back, rather than earlier in the year where it was charge forward every time no matter what. Fine run and cross was wasted by Aquilani tho.
Rossi(4)- invisible man. Granted he's not getting service, but if he's going to be the man, he needs to demand the ball, he needs to edemand service, he needs to go out and get the ball. none of that today.
Vargas(6)- Did everything he could but the rest of the team just didn't live up to his effort. Subbed out late for fatigue.

Subs
Pizarro(For Aquilani '72) (6)- instantly put his presence on the match, but even he wasn't enough to bridge the gap between the front and the middle. We need him to stay healthy and stay in the matches.
Joaquin(For Ambrosini '78) (NA)- not really a factor and his being put in the game actually detracted from teh effort as Cuadrado was forced to move to the other side and basically disappeared.
Matos(For Vargas '86) (NA)- Stupid sub, did nothing for the match. Once Gomez comes back, I don't expect to see him again.

Montella(5.5)- waited to long for Pizarro, although that may not have been a choice, but forced on him by the players fitness level. The Matos sub did nothing for me. Also, his continued insistance on playing Auilani is starting to really annoy me. Dood has nothing anymore. Play Fernandez or even Ilicic, they can't do any worse.

Orsato(2)- He's a punk. Quick with the yellow card in the middle of the field, scared to call a foul near the net. Allowed Roma players to influence him to give a yellow to Rodriguez, allowed Roma fans to influence him on a yellow card to Neto. Gave a weak red card to Pjanic at the end of the match when it didn't matter to try to show his equality. Worthless piece of crap.

"We had many chances to take the lead. Roma had few opportunities, but made the most of them, while we didn't."

"It was a fascinating game with two teams playing very good Calcio. I think either side could have won considering the play, but we have to accept the defeat, even though three points would have been important.

"It’s a pity. The match was fairly balanced with Roma in control at times, at times Fiorentina. In space the Giallorossi can be devastating and in an open game, anything can happen. We proved today we can play on a par with Roma." 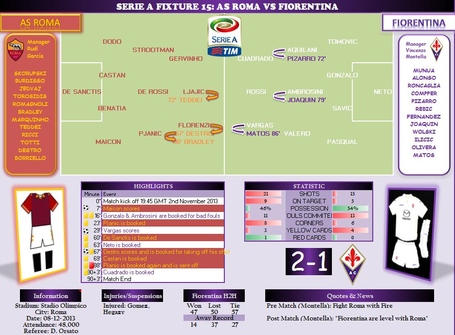 The final, deciding match of the Europa League group play this Thursday as Dnipro comes to the Franchi. A win or tie for Fiorentina sees them win the group and gain a chance at a more favorable draw for the knock out stages. A loss and it's possible that you wind up with a Champions League third place team.

On the weekend Bologna come to town in what is now a must win match if Fiorentina wants to stay in contention for Europe.

The following week will be what should probably be considered as another must win at Sassuolo before the winter break.