La Viola fought for their lives inside of a killer, thriller tonight...

Share All sharing options for: Thriller! Fiorentina 4-3 over Hellas Verona

With a match up of 5th and 6th place teams on the plate for Fiorentina fans it was to be expected that a thriller was in the works, and they were not disappointed in that fact as both teams combined for 4 goals in the first 14 minutes and 3 more over the rest of the match for a total of 7 goals for the game.

Borja Valero scored two for Fiorentina, Juan Vargas a third and Giuseppi Rossi netted a penalty kick for the winner. Valero was wearing the captain's armband today as David Pizarro hurt himself in warmups and Vargas made the start due to a Manuel Pasqual injury as well.

Former Viola Luca Toni and on-loan Romulo featured for Verona and featured heavily in the outcome as Romulo scored a goal and a rebound off of a Toni shot was put away for the third Verona goal.

Complicating things for the visitors was a deliberate handball in the box by Bosko Jankovic which also resulted in a red card. Even with a man down, Fiorentina were forced to scramble down the stretch to save all three points.

The result moves la Viola 5 points over Verona and into a 4th place tie with Inter, 4 points behind Napoli.

Norberto Neto(5.5)- While I can't say any of the three goals were his fault, he did give up a rebound straight to the scorers of the first and third goals. Second goal he had no chance on, not his fault. He did get 4 saves on the day

Nenad Tomovic(6.5)- partially at fault for the  third goal, but redeems himself by causing the penalty and the red card on Verona.
Gonzalo Rodriguez(6.5)- goes a bit missing on the two Verona rebound goals, nearly gets himself in the scoring column as well.
Stefan Savic(6)- bit of a rough start, as did the rest of the defense, but had a few major saves coming down the stretch on Verona counters
Juan Vargas(6.5)- amazing job on the offensive side, but was a big ragged on the defensive side as two of the three goals came from his side.

Matias Vecino(5)- not a great match for the kid. Had a few nice long balls, but really struggled to keep control of the ball
Borja Valero(8)- amazing start of the match for the Match Captain, scoring twice early and then settled into Pizarro's role quite nicely.
Massimo Ambrosini(6)- just missed on a header, did most of the dirty work in the midfield.

Juan Cuadrado(6)- Not up to his usual standards, but did give the ball to valero on the second goal. Most of the match his runns were a missing, but he was mostly on the left. Once he got over to the right, he started to look more like himself.
Giuseppi Rossi(7)- took a while to get in the match, but stepped it up in the second half. Scored the winning goal and nearly got a second if not for a nice save.
Joaquin Sanchez(6)- had a quiet match, gave ball to valero on first goal but seemed to fade late.

Vincenzo Montella(6.5)- Had to go with Valero as Pizarro injured a hamstring in warmups.

Valeri(3)- He's a punk. Way too quick with a yellow card and way to slow to call a penalty. Even the PK given today was called by the end line ref, not Valeri. Gave a yellow to Fernandez for a dive when there was clearly contact. He just sucks.

"I have to compliment our opponents, but we should be more ruthless beacuse we can't always score 4 gols to get a victory."

" We had many chances to extend our advantage, but in defense we have to maintain concentration."

"Borja Valero's brace? If he starts scoring from outside the box, then it's clear he is the complete player."

"Mario Gomez will start training with the team over the next few days, then I will evaluate his progress. I don’t know when he can play." 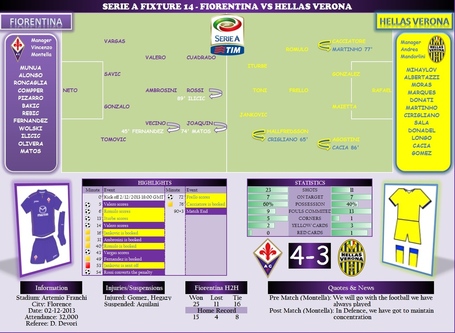 The status of Pizarro is going to be a big conversation this week. If not, it's back on Borja's shoulders. Looks like Gomez won't be ready yet, so Rossi will have to step it up again. After Roma, the Europa League final group match will be the focus. I epxect some lineup turnover, but maybe not as much as against Pacos