Groovin' On A Sunday Afternoon

It wasn't always easy today, but our Rascals in purple took care of business today at the Franchi 3-0 over Bologna

Share All sharing options for: Groovin' On A Sunday Afternoon

On paper today's game seemed a large mismatch and the final score agreed as Fiorentina grooved to a 3-0 win with goals from Josep Ilicic, Borja Valero and Giuseppi Rossi.

Vincenza Montella set out a slightly different lineup today in front of Norberto Neto with a 3-5-2, sitting David Pizarro and Manuel Pasqual.

With the normal three man back line of Nenad Tomovic, Gonzalo Rodriguez and Stefan Savic, Montella juggled the midfield by putting Alberto Aquilani in Pizarro's central role, moving Borja Valero back to his natural spot on the left, and bringin in Mati Fernandez on the right, while the Juans filled out the wings, misters Vargas and Cuadrado respectively.

Next to League goal scoring leader Rossi, Fiorentina's coach slotted Ilicic, who has been looking for a chance for a while now.

The match started out much differently than the final score would lead one to believe however, as Bologna came out confidant and controlled much of play early, but by the tenth minute, la Viola had woken up and began to spend time in the visitors end. Cuadrado lashed a shot early that Goalie Gianluca Curci had a hard time seeing, but it was parried away.

Just a few minutes later, however, Ilicic made a steal, dribbled around and through three defender and lashed a ball into the net for his first tally in purple and set the tone for the rest of the match.

Aquilani had a chance 5 minutes later on a perfect pass from Cuadrado, but got off what the beIN sports announcers called a back pass to the goalie.

Cuadrado had another chance at goal as Valero slotted a perfect pass to the charging winger who wound up one on one on the goalie, but Curci was once again able to parry the ball away. The beleaguered Bologna keeper faced 8 shots on net for the day and managed to save 5 of them.

But at the half hour mark, Fernandez found a charging Rossi, who fed Valero in the box and Valero made no mistake, doubling the lead and that score stood until half time.

In the second half, Bologna changed up their lineup, bringin on Mantovani and Bianchi and seemed to take control of the match early in the half again, but were unable to capitalize and never got a real good chance due to good defensive play by Fiorentina.

Montella then rolled his first change, bringing in Joaquin for a tired Ilicic, and the move paid immediate dividends as three minutes later, Valero found Rossi in the box with a lob and Pepito brought the ball down masterfully and lobbed it over the goalie for the third goal.

After that, Bologna's will seemed to be broken and the match pretty much was over for all intents and purposes.

Fiorentina did bring in young Ante Rebic for Rossi and he had two nice runs, but unselfishly tried to serve to ball to Joaquin when, perhaps, a bit more selfishness was called for, as he seemed to have the better shot, albeit from a hard angle.

With the result, Fiorentina moved into 4th place, although Inter will be playing Napoli later today and could reclaim that place with a victory.

Neto(7) - Clean sheet and 4 saves and as others noted, he seemed much more confident in his distribution and ball handling

Tomovic(6.5) - All the defender are due a big thumbs up for the match today. Granted they played a relegation team but with that fact and the distraction of the winter break looking, it was a great performance.
Rodriguez(6.5) - Kicked in the face early, made a great intervention to avert a chance in the box and wound up bloody near the end. a warrior
Savic(6.5) - Savic matched up with Kone all day and never once did Bologna's leading scorer get teh better of him

Cuadrado(6.5) - Had a wide open shot that he couldn't finish and always looke ddangerous on his side. Picked up a silly yellow card for a flying karate kick and will miss the next match. Will give him some extra rest for the second half of the season
Fernandez(6.5) - Slotted into Aquilani's spot and filled the role well. Not flashy, no stand out plays, but solid and had a few excellent plays
Aquilani(6) - Had a horrible shot on goal, but other than that had a solid match. He played in Pizarro's role, which allowed Valero to play his normal role, in which he excels. sufficient.
Valero(8) - Man of the match. an assist, a goal and, other than his first pass, was nearly perfect on the pitch.
Vargas(7) - lean mean el loco machine. I think one of the most gratifying stories of this season is the reclamation of one Juan Manuel Vargas, raising himself from the dead and becoming a contributing memeber of this squad

Ilicic(7) - Like night and day from teh rest of the his appearances. three on one drive for the first goal, he played back on defence, made amazing passes. His coming out party.
Rossi(7.5) - no invisible man today. a supremly awesome control and lob for his goal, he was a threat as long as he was on the pitch.

subs
Joaquin (for Ilicic '61) (6) - came in and won a free kick on his first touch. Super sub may just be his role on this squad.
Rebec (for Rossi '77) (6) - Had two great runs but was not selfish enough to take the shot and was unable to get the ball to Joaquin in the box. He should learn well from this tho. Shows great promise.
Compper (for Tomovic '82) (NA) - No real effect on the match./

Montella(8)- had his guys ready to play and had the right lineup. Putting Aquilani in Pizarro's role seemed to free up Valero, who struggled last two matches and even seemed to get a better effort out of Alberto. Starting Ilicic, another stroke of genius as it was a break out day for him. Even Rebic looked good

Carmine Russo(6) - Maybe one of the best officiated games i've seen all season. Fouls were all but even, only three cards given and all of them warranted. Only remember one, maybe two calls I would have given. Bravo!

Montella
"Over the full 95 minutes, we probably we more consistant and mature than usual."

"we kept to our style and weren't too frenetic, interpreting the game better than any other this season, I am satisfied. I hope the team will play like this in the future."

Regarding Ilicic
"We knew that we'd have to wait on some players, whether they were young or injured, because that is our dimension. We need to have patience to help everyone gorw and improve."

Regarding the Europa League
"Juventus are a strong side, as are Napoli and Porto, there are many teams who can reach the Europa League Final. They have the advantage in that sense, as they built their squads for the Champions League.

"To reach the Final you need to go through several rounds, so we will to take it slowly and see what the draw holds. We'll leave the dreams to the fans while we focus on the field." 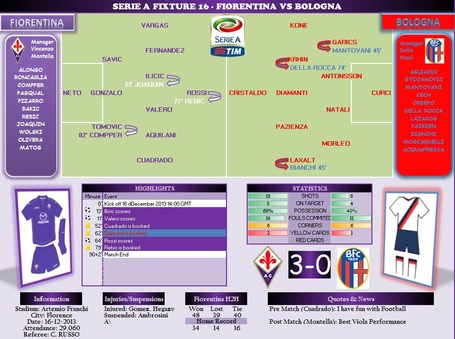 One more match before winter break at Sassuolo. Has to be considered a must win, other teams around Fior have a farily easy go except for Inter, who play Milan and Verona, who host Lazio. Roma host Catania, Napoli play Cagliari, Torino host Chievo and Genoa host Bologna.

After the break, Fiorentina have what looks to be an easy schedule in Serie A, but the fixtures will pile up as the Coppa Italia comes into play in January, and if they win, February as well. The Europa League starts up again in February to further complicate the schedule.