Movin' On Up; Pandurii 1-2 Fiorentina

Fiorentina booked a place in the next stage of the Europa League today in Cluj, Romania.

Share All sharing options for: Movin' On Up; Pandurii 1-2 Fiorentina

It wasn't pretty and Fiorentina looked disinterested at time, but they woke up in time to score twice in the last 5 minutes to edge out Pandurii and secure advancement into the knock out stages of the Europa League.

The win is the fourth win in the group stages.

The midfield consisted of Alberto Aquilani, Matias Fernandez and Juan Cuadrado, while the front line were all back ups, with Joaquin, Ryder Matos and Oleksandr Yakovenko all getting rare starts.

It took 12 minutes, but Fiorentina got off the first shot, a Matos try that went wide, it was to be the ony shot until 17 minutes later when Fernandez sent another one wide.

Only a few minutes later, Pandurii took their first shot and made it count, with a fantastic score from Eric Pereira.

The half ended with a 1-0 Pandurii lead.

Montella then brought in Borja Valero for Yakovenko and the tide began to turn.Within the first ten minutes Valero got off two shots.

20 minutes into the second half, Montella threw the dice again as he brought in Josep Ilicic for Fernandez and teh next minute Ilicic earned a free kick deep. Nothing was to come of that kick, but it seemed to get Fiorentina more in a mood to push forwar and try to get the equalizer.

It took another 20 minutes, but Juan Cuadrado finally got a cross into Matos who dribbled the ball past the Pandurii goal for the equalizer.

The match went to stoppage, but one more push from Cuadrado to Valero gave Fiorentina the win.

I only saw small parts of the match, so i'll distill the report cards from various other sources. Feel free to contribute your own


Munua(5) - Didn't really look ready, was slow and clunky in his movements. A bit scary if Neto gets hurt. On the plus side, Munua did make 4 saves.

Roncaglia(5.5) - had a few blunders in the first half, fairly disappointing match by all reports. Subbed out late for Capezzi.
Rodriguez(6.5) - had a great assist that Borja sent wide, fairly solid performance.
Compper(5) - distracted, his mistake freed up Pereira for the lone Pandurri goal.
Alonso(5) - reportedly unsure, several mistakes. Step back for the youngster.

Aquilani(6) - Played more of a defensive midfield role. A few nice long passes.
Cuadrado(8) - got both assists and nearly had a third, but for an offside call. Also dribbed around the defense like they were standing still for much of the second half.
Fernandez(5.5) - not much in the offense, had a weak shot late, but never really a factor. Subbed for Ilicic

Joaquin (6) - Montella called him man of the match, but other sources didn't think so. From what I saw, he had a nice move on the outside to win a free kick, but also gave up a bad pass that turned into a pandurii counter. give and take.
Iakovenko (5) - sounded like he was never much of a factor, subbed at halftime for Valero.
Matos (6.5) - Had a few shots early, finally broke through on the first goal, nearly got a second, but for being a hlaf step off. Is now the leading Viola scorer in Europe.

Subs
Valero (for Iakovenko 45') - (7) game changed dramatically when he came in, got the winning goal in stoppage.
Ilicic (for Fernandez 65') - (6) had some nice runs at the net, got a few fouls. Nice to see him back on the pitch.
Capezzi (for Roncaglia 85') - not really a factor

"The match today has many positives, but it also had many areas we need to work on, especially concentration."

"We had the desire to take initiative, but we wasted many chances. We are far superior to Pandurii, we need to work in order to improve."

"He (Cuadrado) did well in possession, a little less without the ball, but it was the first time he played there (in the center.) We know he's much better as a winger."

"If I had to pick a Man of the Match, it would be Joaquin, as he showed he wanted to win all the way to the end. Everyone should follow his example."

"Now we have to try to beat Sampdoria, but I regret we used up more energy than we should have today." 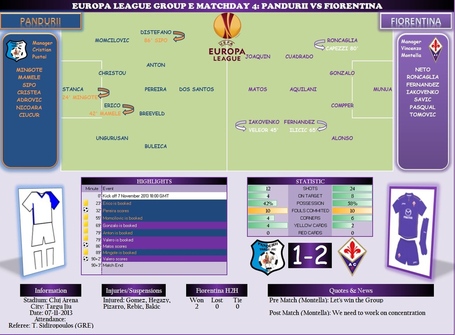 Following the Samp match is another International Break. After the break la Viola will be looking to get Mario Gomez back in the fold, and none to soon as matches with Verona and Roma are looming, as well as the last two Europa League group matches.