We Can Beat You With One Hand Tied Behind Our Back...

Maybe a leg too!

Share All sharing options for: We Can Beat You With One Hand Tied Behind Our Back...

Fiorentina went into the San Siro today to face AC Milan, without Mario Gomez, without Juan Cuadrado, without David Pizarro, without Matias Fernandez, Josep Ilicic, Marko Bakic and with Gonzalo Rodriguez suffering from the flu and marched right out with a 2-0 victory.

To be fair, Milan were missing quite a few players as well, with Philippe Mexes banned and Matias Silvestre, Mattia De Sciglio, Daniele Bonera, Stephan El Shaarawy and Giampaolo Pazzini out injured.

Regardless, la Viola were forced to change their style of play and let Milan come at them for much of the match, absorbing the pressure time and again and then launching quick counters at the Rossoneri and capitalizing on free kicks in the beleaguered Milan defensive end.

A deflected Juan Manuel Vargas free kick and Borja Valero pouncing on a poor clearance from a Joaquin shot were all Fiorentina needed as Neto racked up another clean sheet for the 2-0 win. The win is the third straight win against Milan at the San Siro.

Vincenzo Montella put out a 4-4-2 in front of Norberto Neto, with Nenad Tomovic and Manuel Pasqual outside of Gonzalo Rodriguez and Stefan Savic.

Alberto Aquilani and Vargas were split on either side as Massimo Ambrosini played the defensive Midfielder role and Valero played the attacking mid position. Ryder Matos and Guiseppe Rossi played forward.

The match started out all Milan, with teh home squad getting off the first 7 shots, but only 1 was on goal and that a weak shot by Muntari that was easily stopped by a sprawling Neto,

6 minutes after the save, Muntari was called or a foul on Matos, and it probably wasn't a foul, but given Milans constant diving, I'm not going to argue it. Juan Vargas stepped up and fired a kick straight into the wall which deflected off Muntari into the corner of the net.

Shortly after the goal, Ambrosini had to come off the pitch and was replaced by Matias Vecino.

Milan kept pushing forward as the half wound down but Balotelli went into his act in the closing moments, diving and feigning injuries and basically closed out the half for la Viola.

The second half started much as the first did, with Milan getting the first 7 shots before Montella played his second card, bringing in Joaquin for Rossi and that move paid dividends within 5 minutes and Joaquin drove around his defenders, drove a shot towards the net which Gabriel could only weakly parry right to the feet of Borja Valero standing in the middle of the box with a wide open net.

That finished the match for all intents and purposes, although Milan got a chance right after the second goal, but couldn't get it on net.

Fiorentina move to 4th place in the league with 21 points, pending Inter at Udinese and Cagliari at Verona tomorrow. AC Milan drop to 10th with 12 points and could wind up as low as 13th, depending on how Torino, Genoa and Cagliari do.

Neto(7) - Bit shaky in the beginning and never really got a lot of pressure on net from Milan, getting credited with only one save and that on a weak dribbler, but he had several timely punches and stood up for himself. he also really began to look like he owned his area in the second half and seems to be growing in leaps and bounds. A clean sheet at thw San Siro in nothing to sneer at.

Tomovic(7) - Up against Kaka most of the bight and Balotelli a few times as well and never really faltered, also played well going forward. Great match for Nenad
Rodriguez(8) - wow. and he had the flu yesterday! Wrestled by Balotelli all night in the box and never gave an inch.
Savic(7) - Even Savic had a great game. if i had one complaint for the defense as a whole, it would be the number of corners given up (10) and how easy some of them were given.
Pasqual(7) - Pasqual really played more of a midfield role as the team moved forward, but was quick to jump back on defense, at times even drifting over to the other side on break outs.

Aquilani(7) - Alberto started off slow, the first 30 minutes he really tried to hard and played to far forward and every pass he made went to a defender, but he settled down and the rest of the match he played back like a demon, with 4 recoveries, 3 interceptions, 3 defensive blocks, 2 clearances, and two defensive tackles. His constant darting attacks kept Milan off guard and they rarely got a clean run onto the box.
Valero(8) - another wow. He really was all over the field tonight.
Ambrosini(7) - I'll give him a 7 for effort. He really didn't play a huge part in the match, but the source of a lot of the passion shown tonight can be attributed to Massimo.
Vargas(8) - I really liked El Loco tonight, he's still not 100% and still is a bit rusty, but he worked his butt off and fought for every ball and really made a huge difference tonight. A little lucky on the goal, but every shot you don't take doesn't go in, to quote Wayne Gretzky.

Matos(7.5) - Another hard worker tonight. The run he made early that the Milan goalie had to parry away really rocked Milan, who had owned the match up that point and really changed momentum.
Rossi(7) - Rossi worked hard and with just about any other ref, might have gotten a yellow and maybe a second yellow on Nigel De Jong who gotaway withan awful lot of contact on the night.

Montella(8) - Bravisimo, did not let the team hang their heads after last match, managed to field a lineup and a formation that worked with major players dropping out and being unable to practice and each sub, well at least thw first two, contributed greatly.

Mazzoleni(5) I'm of two minds when it comes to the ref tonight. I'm glad he really didn't fall for Milan's hijynx and yet he still impacted play with his calls and was very inconsistant. What was a foul in one area wan't a foul in another, there were at least two missed handballs I saw. Balotelli pushed people in the back and off the field more than once before he was finally carded for knocking Neto off the pitch. A red card could have been given for that offense by the way. De Jong was knocking people all over the pitch and never even got a talking to, much less a card and Balotelli's hystrionics at teh end of the half really should have warranted a yellow as well. Meanwhile Mazzoleni is nit picking over the palcement of a ball on a Viola free kick and letting milan advance the ball on every throwin and free kick of their own.

"Tonight we had a great performance and deserved the victory as players like Vargas were settling into the team."

"We are taking advantage of all our resources as players are showing great professionalism."

"We forced the crowd in the San Siro to be impatient and we allowed nothing and as time went on they began to grumble."

"Can Fiorentina get into the title race? I only know the season has just started, the table is very tight and anything can happen." 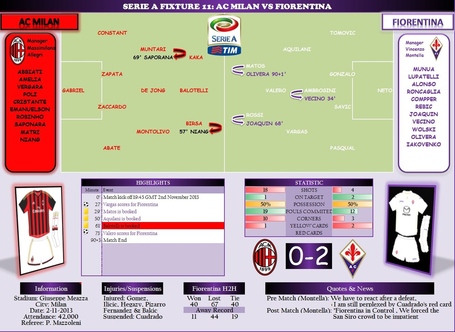 yellow card. Past 17, every yellow card is equivalent to a one-match ban.

(Players receiving yellow cards in this match have an *, red cards #)

A trip to Pandurii and probably a chance to rest some of the regulars and get more playing time for the youngsters who are growing day by day. A tie or a win clinches advancement from the group.

Following the trip to Romania, Viola will come back to the Franchi to meet up with old friends Lorenzo di Silvestri and Delio Rossi and Sampdoria. Samp had gotten 7 out of the 9 points before losing to Verona on the road midweek. Prior to that, Sampdoria had only managed two points all season.