Just Be Thankful For What You Got

It wasn't Gangsta Whitewalls, but a point is a point, a clean sheet is a clean sheet and to get both on the road is never really a bad thing.

Share All sharing options for: Just Be Thankful For What You Got

Fiorentina only get a tie on the road today in Portugal against Paços de Ferreira , but with only 2 regulars starting it's not a bad result. La Viola remain in first place in the group and only need a tie in the final match against Dnipro to win the Group.

Vincenzo Montella's lineup choice showed that he was saving his regulars for the league as he fielded Gustavo Munua in goal, a back line of Facundo Roncaglia, Nenad Tomovic, Marvin Compper and Marcos Alonso. In midfield he played Alberto Aquilani and Massimo Ambrosini on either side of Marko Bakic, while Matias Fernandez and Ryder Matos bracketed beleaguered Josep Ilicic.

The first half was largely uneventful and fairly boring as Fiorentina sought to find a rhythm, while the home squad played back for the most part and charged forward when they had the chance.

The lone scoring chance was for the home squad as Bebe had a wide open net, but scuffed it straight at Munua.

The teams went to the half scoreless and went back to the drawing board.

Montella started off the half bringing in David Pizarro for Bakic, who really had done nothing of note, and tempo changed nearly immediately.

Fiorenitna began to impose their will, but still couldn't break through.

Montella then went to Juan Cuadrado and la Viola furiously tried to break through with  several chances, but only managed a couple of balls on net and nothing got through.

Pacos had one last chance to steal all the points on a counter as a man got away from the defenders, but Munua stuck a fist into it and save the point for the visitors.

The point, combined with Dnipro's result, they won convincingly at home, 4-1 over Pandurri means they trail Fiorentina by just a point. Dnipro will have to go to the Franchi and get a win to take the group. To further complicate things, Fiorentina have a huge match with AS Roma before the last Group Stage Match.

Munua(6) - looked lsow and shaky early, was given a gift on a wide open attempt by Bebe, but made the stop to save the result late.

Roncaglia(6) - Looked solid on his side of the field, didn't press forward as much as he has in the past. Played well within his role.
Tomovic(6) - Did well in Rodriguez's role, especially since it's not his natural place. Granted the competition wasn't Serie A quality, but a fine job
Compper(6) - same as above. Looked pretty good in defense, distributed the ball well when moving forard.
Alonso(6) - had at least one or two great defensive plays, but lacked the forward charge we've seen from him before. He was available for a lot of balls down the left side, since he was clearly faster than the defenders, that's something Pasqual has never really offered. Also no black hole of crossing from that side. All that being said, not sure he's ready for prime time yet.

Aquilani(5.5) - Played more of a defensive role, as he's been doing more recently. had a chance at goal with a header, but sent it wide. I think this team needs more from him.
Bakic(5) - Very not ready for prime time. Made bad choices, couldn't hold the ball, Definitely not the next coming of Pizarro. Subbed out for pek at the half,
Ambrosini(5.5) - probably still feeling the effects of the injury and the time off. Need  a bit more from him.

Fernandez(6)- had a pretty good match, especially down the stretch. Way better crosser than Pasqual, but wasn't on at all with his shot, but Fiorentina looked a lot more dangerous from the corner in this match.
Ilicic(5.5) - Still doesn't look like himself, but you can't thrown him out there with a bunch of scrubs and expect miracles. Like Montella says, it's goign to take some time.
Matos(5) - Not really a factor for long stretches of the match. Tried to dribble against three men and lost the ball, of course. he's young tho and needs work. Future is bright.

Subs
Pizarro(For Bakic) - (6.5) The tempo changed instantly with his entry. From half time on it was all viola excpet for the occasional counter.Made his man look silly several times. Got a stupid yellow for dissent and now is in danger of missing a match. He needs to watch that.
Cuadrado(For Ambrosini) - (6.5) was clearly a level above his man. ran around him like he was standing still a few times. Wish he could've played a bit more, but we need him fresh for the league. Coaches decision.
Yakovenko(For Ilicic) - not really a factor

"It was hard to find space tonight as our opponents put 10 men behind the ball."

"It's a bit of a shame that we didn't win, but the team tried to score until the 95th minute."

"This cannot be the Ilicic we know as he needs to play (more often). He has not had any luck so far with La Viola, as he arrived with a few fitness issues and picked up another one right away."

"This (the injuries) have slowed down the proces of settling into the squad, but we will see him soon in his best shape." 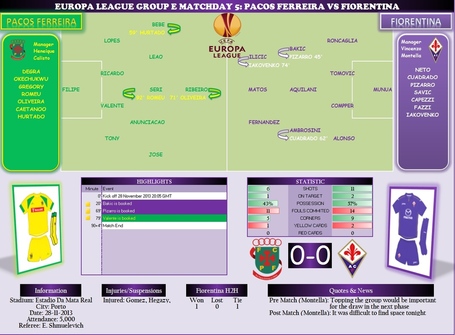 5th place against 6th place in Serie A as Hellas Verona and Luca Toni come to town, and to make points more vital, a trip to the Capital to face AS Roma the following week. Fiorentina will need to shake off two lack luster performances and focus on getting back to the form that have seen them get to where they are now.