Who's bad? Fiorentina is, at least after breaks. Another wasted opportunity and a completely wasted day for fans.

With a chance to gain ground on Napoli, Fiorentina completely forgot there was a match to play as no one showed up today, with the exception of Neto, who was called on to make 10 saves.

Even Neto's heroics weren't enough to keep the ball out of the net as the Viola defense, well, so called defense that is, forgot to defend and left Thomas Heurtaux wide open right in front of the net on a set piece for the lone goal of the match.

Fiorentina have no time to lament the missed opportunities as 7 games in the next four weeks loom Including a wasted two days to travel to Portugal and back.

If he's smart, Montella will just ignore preparation for Thursday's match in Portugal, play a Primavera team and get this team to focus on the next Serie A match.

The entire team, with the exception of Neto and Cuadrado get a zero. Neto gets an 8 for saving this team from an 11-0 drubbing and Cuadrado gets a 1 for a single play where he dribbled past all defenders. He still only managed a weak shot on the play

I don't really care what Montella has to say, no excuse is good enough for not being ready to play this match

but here is Viola Channel's review 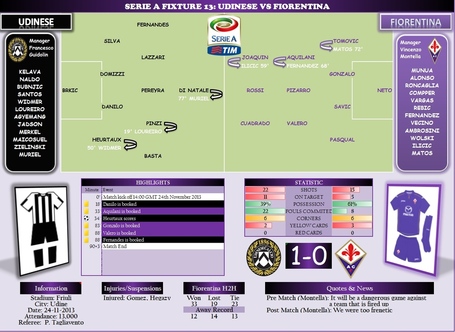 (* indicates a goal in this match - yah right)

No time to recover after this horrible performance, the team will travel home, have two days to practice and then will have to travel to Portugal to play Pacos, will travel home and probably only have one or two opportunities to train for Hellas Verona.