Oops, They Did It Again; Fior 2-1 Sampdoria

Once against la Viola played with our hearts, got lost in the game and nearly gave up an important 3 points by letting Sampdoria back in the match in the closing moments.

Share All sharing options for: Oops, They Did It Again; Fior 2-1 Sampdoria

If there has been a down side to what has been amazing season for Fiorentina, it's the lack of focus that occasionally takes over this team at the end of halves and games.

Two first half goals by Giuseppi Rossi were nearly wasted as Sampdoria got a late goal and forced Fiorentina to defend and were it not for poor finishing by the visitors, this would have wound up a tie, or worse.

However, a win is a win, and the result moves Fiorentina ahead of Verona into 5th place and they gain ground on both Roma and Napoli, as well as putting space between them and teams behind them like Lazio, Milan, Parma and Udinese, la Viola's next opponent after an International break.

Norberto Neto(6.5) - Made two out of three saves, looked more in control in back and I don't recall one ball kicked out of bounds. Had no chance on the lone goal.

Nenad Tomovic(6) - had some great work forward, interacting with Aquilani, Pizarro, Cuadrado and Joaquin. He's playing a lot like Pasqual without the bad crosses.
Gonzalo Rodriguez(7) - He really is one of the better defenders in Italy. One play in particular stood out for me as he intervened on a play and fought, with the ball, nearly to midfield before being fouled.
Stefan Savic(6) - I still think he passes back to Neto far too much but he played fairly well for 70 minutes. After that he looked shaky, but so did the rest of the squad.
Manuel Pasqual(5.5) - So wasteful with possession, Cuadrado dribbled around defenders like they were standing still and Manuel just passes it to a defender. Sonmeone is wide open in fron of the goal and manuel crosses it three feet over his head and it wasn't like it was a long cross, he was inside the box, just need a little chip and Fiorentina are up by 3 goals and none of the last 20 minutes happens. All that being said, he did play well in the first half, just needs to stay within himself, he's a defender, not the teams assist leader.

Alberto Aquilani(6.5) - Got the foul that earned the penalty kick and played well in the midfield. One shot was horribly weak, but he played well.
Borja Valero(7.5) - Had a shot go wide, but really is the main force in the mid field.
Matias Fernandez(6.5) - great passing display from the entire midfield, including Mati.

Juan Cuadrado(7) - Cuadrado played well out of position and moved, along with Joaquin, all over the pitch. He really is way above the run of the mill players.
Guiseppi Rossi(8) - He's the man, any talk of "damaged goods" is obviously dead wrong. He is currently the best scorer in Italy and deservedly so.
Joaquin(6.5) - Joaquin is really coming into his own, he interacted with the midfield and the forwards nearly effortlessly, while switching sides and angles of atacks and helping to cause fits for the defenders. Wether coincidence or not, his exit coincided perfectly with Sampdoria's come back.

subs
Juan Manuel Vargas (for Joaquin 68') (6) - Played much more within himself than the last time I complained about him taking shots when they should have been killing off the game. i suspect the coaches had a word with him and defined his role a bit more.
Ante Rebic (for Cuadrado 79') NA
Matias Vecino (for Fernandez 84') NA

Vincenzo Montella(6.5) - Had the team ready from the get go, but needs to impose his will on this team and get them to stop this lack of concetration at the end of matches (and first halves really as well).

Damato (4) - Just another lousy Italian ref. The penalty was weak, he called more than twice as many fouls on Sampdoria than Fiorentina, gave out four yellows to Samp and none to Fiorentina, all which will raise questions that probably aren't warranted. he stopped play more than twice, when the advantage should have been called.He's just one of those refs that interfere with the flow of the game such as to be a detriment.

Montella:
"We dominated this match for 70 minutes with passing, pace and movement. As it came at the end of a Packed list of fixtures, we were afraid of this match."

"Sometimes you feel that this team wants to be spectacular above all else. That is a strength and at time, it's our weakness. We can't take the joy of calcio away from the players."

"We conceded on a counter and got a bit of a scare and then we risked giving up the 2-2, which wouldn't be the first time we've done that, but we got away with it, this time."

"I don't know why this keeps happening. Maybe we felt a little too in control tonight and relaxed, which is an error and we must not do that." 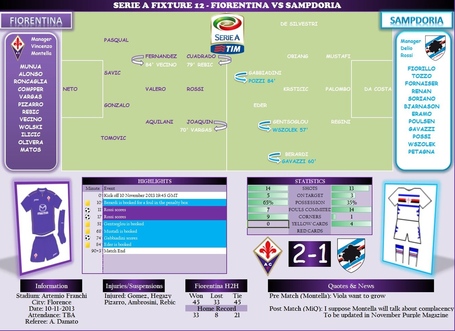 International break time once again. Most of our nationals will be off galavanting around on meaningless friendlies. One exception could be Ante Rebic, Croatia have a playoff, and even if he's not called up by the  senior squad, he'll be off with the U21 for qualifiers. Rafal Wolski and Marko Bakic will aslo probably be off with their U21.

After the break is a big trip to Udine, Fiorentina has not done well in matches after these breaks this season, they will have to do better against Udinese. Pizarro will be on yellow card warnings as well, so he'll need to focus, as will Ambrosini and Aquilani. The match could mark the return of Mario Gomez.

After Udinese, the Europa League returns with a trip to Portugal to play Pacos, the two huge matches against Verona and AS Roma.