You ain't got no alibi, YOU UGLY

Horribly ugly performance by all concerned parties today at Stadio Olimpico as Lazio and Fiorentina stumbled, bumbled and fumbled to a 0-0 draw today. Further complicating issues was a whistle and card happy ref in Daniele Orsato. About the only thing nice about this match was that the pitch wasn't a quagmire like Thursday's match in the Ukraine.

Another positive was that Fiorentina came out of the match without any suspensions as Gonzalo Rodriguez and David Pizarro were on a yellow card warning. Manuel Pasqual hurt a shoulder, but did come back after going off the pitch for a short amount of time.

Fiorentina led in possession 56% to 44% but most of that was in their own zone as they spent most of their time passing the ball backwards. Fiorentina only managed three shots and none of them were on or even close. Lazio, however, had even worse aim as they fired off 20 shots, only 4 on net, but Neto was up to the task every time.

The result drops Fiorentina to 6th place as Hellas Verona passed up both of today's squads with a victory.

Norberto Neto(6)- 4 saves and a clean sheet and yet so unsatisfying. I can't even begin to count the number of his kicks that went out of bounds and every back pass to him was a near mis-adventure. Maybe the break will settle him down a bit and give the coaches time to work with him. All that being said, he was probably the best Viola player on the pitch.

Nenad Tomovic(5.5)- Played better going forward than in back, but even that was not very good. Bout the only good thing I can think to say is that at least he's not Savic
Gonzalo Rodriguez(6)- Best defender out there, but that's not saying a lot, no presence at all up front either as Fior only got one corner and very few free kicks.
Stefan Savic(4)- wow, just horrible. give aways, more corners given up, horrible passing day. Too bad he's going to go off on International Duty, he could use some rest and work with the coaches.
Manuel Pasqual(5)- Didn't do a lot for me, did man up and come back after a crunching a shoulder. He will benefit from some time off too.

Alberto Aquilani(5)- Entire midfield was schooled for most of the match, He played better in the second half, but seemed to tire. Will probably be off with the National team, but probably won't see much. if any, playing time.
David Pizarro(5)- Not a great day for Pizarro, constantly pushing the ball backwards, gave up a rn on goal after a porr holding play. He did play a bit better later, was subbed off to prevent another yellow card. Will be heading to South America.
Massimo Ambrosini(5.5)- Got a silly yellow, but worked hard all match, was basically the fifth defender for most of the match.

Juan Cuadrado(5.5)- Horrible first half, too cute early, with off target back hells and had the ball taken away fairly easily. Second half was much better, got out on the wing and caused a lot of fouls and got some free kicks. He'll be off for south america as well, will need to get him back healthy.
Guiseppe Rossi(5)- Not much of a factor for most of the match. Given a yellow card for what, I still don't really know. Subbed off.
Borja Valero(5.5)- Out of position and looked it, He will benefit greatly from the break.

Vincenzo Montella(5.5)- His attempt to bring something to the forward section of the field by playing valero and Cuadrado forward backfired as it cost him his usal midfield domination. None of his subs had any impact at all, other than, perhaps, keeping Pizarro from another yellow card. All that being said, it's a result, on the road, against a team that will most likely be fighting for an European place.

Daniele Orsato(4) - Very biased first half in favor of the home team, in my opinion, with 8 fouls called on la Viola to only 4 on Lazio. Not just the number but the situation and the position of the fouls favored the home squad  as Lazio got at least 3 free kicks around Fiorentina's box. He evened up the foul total in the second half as the squads wound up nearly even on fouls, but a lot of that was due to Juan Cuadrado getting out and making people foul him. As usual, the ref gave out a lot of yellow cards, 8 in this match. bringing his season total in just 4 matches to 21. He overly participates in matches he officiates.

"It was an important result (for us) and we will take the point, even if Lazio deserved something more."

"We tried to take the initiative, but tonight we weren’t sharp enough. This  is a positive result, because last season we wouldn’t even have managed that point.

"The break comes at the right time, as we can get some players back from injury and rest others. It’s no coincidence we lacked sharpness this evening."

Neto:
"I'm happy with the performance of the lads, if we were not together we would not have drawn today. Any match is hard in a stadium like this. We must look ahead and try to improve every day." 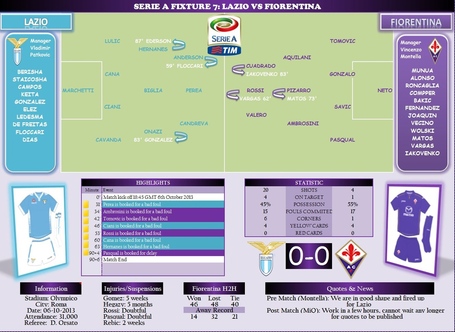 International break. All the usual suspects, including Guiseppe Rossi this time, will be out playing for their countries. this break will give players like Valero and Rodriguez time to rest up before the Juventus match.

After the break, fixtures come hard and heavy again, with 7 matches between Oct 20th and Nov 10th. After Juve is the next Europa League match in Florence against Pandurii, followed by at Chievo, Napoli, at AC Milan, the return match at Pandurii and Sampdoria.