It wasn't pretty, but Fiorentina overcame the weather, the pitch and being a man down to scrape out a Europa League win.

Fiorentina went into Dnipro today with most of their attack out injured, with the weather against them as the match was played in near freezing temperatures with rain and snow turning the pitch into a marsh and managed a 2-1 win even after going down a man.

Goals from Gonzalo Rodriguez, from the penalty kick spot and Massimo Ambrosini saw Fiorentina get their second Europa League win in as many group matches to lead Group E with 6 points over Dnipro who has 3.

Rodriguez's goal was from the PK spot after Matos Ryder was taken down in the box and Ambrosini was a header from Borja Valero.

Fiorentina got 5 of 7 shots on goal, much improving on their recent poor shooting percentage and goalie Norberto Neto made 4 saves on 5 shots on goal to hold Dnipro to one goal.

The lone goal for Dnipro was also from the penalty spot as David Pizarro get his arm up and made contact with the ball in the zone. He was given a yellow card for the action as well. He then went on to rashly dive at a player with studs off and rightly got his second yellow, being sent off with about 10  minutes to go and will miss the next Europa League match against Pandurii.

No report card today, Didn't see enough of the match to grade fairly 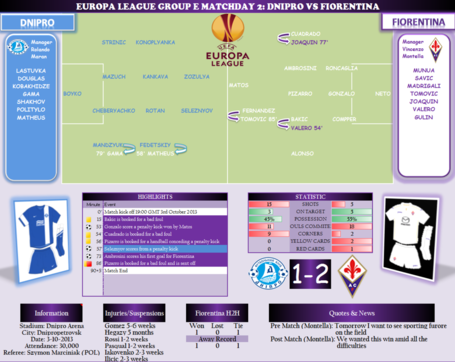 "It was a hard opponent on a difficult pitch agaisnt a team that had been unbeaten in eight games at home in Europe. We were ready for the battle, which was played on a itch that was at it's limit."

"I was glad for those who haven’t had much space this season, but proved they deserve to be part of this squad."

"We were told by referees that it’s a handling offense if the player moves towards the ball or at increases the size of his body. Pizarro has little arms, so I’m not sure how much he could increase them..."

Home and away matches against Pandurii on Oct 24th and Nov 7th.