Serie A refs, the worst in the world, gift Napoli three points and deny Fiorentina the services of Juan Cuadrado for the match against AC Milan

Share All sharing options for: Same Old Song And Dance

Unfortunately, or perhaps fortunately, i was unable to see today's match, so this review will be abbreviated, but feel free to fill in the spaces for me,

The bottom line is that Gianpaolo Calvarese had a real bad day, missing several calls including a penalty in stoppage that photographic evidence clearly shows to be a bad call. To add insult to injury, Juan Cuadrado was called for diving on the play and ejected.

There is no recourse as Italy refuses to question it's arbitrators authority or even to admit anything is ever wrong, so no Vespa for Milan.

Fiorentina reportedly dominated every aspect of the match, except the one that matters, the final score and will have to suck it up and pull it together as they have only three days to get ready and travel to the San Siro for AC Milan. Whether Mario Gomez is available remains to be seen, but at his point is considered doubtful.

Please feel free to add your own report card

"This is a shame, but if we focus on just one incident then we ignore a great performance by Fiorentina."

"I am very satisfied with the way we played, with the fact we pinned Napoli back and forced them to only focus on counter attacks."

"I told the team they must not act like victims, but realize this is the path we must go on in order to find success."

"We had a lot of chances and the fact that we put this Napoli team on the ropes means we have a lot of quality. We must not just look at the result, as this was probably Fiorentina's best performance of the season."

"Mario Gomez will almost certainly be back after the International Break. He is a player above and beyond the norm, we hope he gets back soon."

"At the same time we have Gieseppe Rossi, the current Capocannoniere, so the team is doing very well without him." 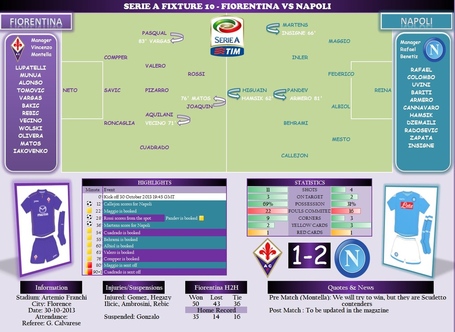 A trip to the San Siro for the Montolivos. Luckily Milan are nowhere near as good as Napoli, at least right now, and a similar effor by Fiorentina could, barring ref interference, result in points. Rodriguez will be back, but Cuadrado will not. remains to be seen if Fernandez can make the trip, either.

Following that match is a trip to Romania. I'm expecting a lot of players to take that match off,.