It wasn't as easy as it perhaps should have been and it certainly wasn't artistic, but three points is three points and Fiorentina took them all thanks to Juan Cuadrado.

Coming into the match, every facet of the match seemed to be in Fiorentina's favor as Chievo was second from bottom of the table, while la Viola in the top six. Fiorentina were coming off an incredible come from behind win against Juventus while Chievo had four prior losses in Serie A. The Flying Donkeys were missing several key players due to injuries and suspensions, while Fiorentina were only missing Mario Gomez and Josep Ilicic, who haven't figured into coach Vincenzo Montella's plans for quite a while.

So basically, a blow out for Fiorentina fans was to be expected.

But, as we all know, Serie A really doesn't pan out that way usually, at least not for la Viola as Chievo came out and scored early and was able to sit back with ten men behind the ball and let Firoentina come at them.

That strategy worked well until Chievo got caught coming forward and a nice Guiseppi Rossi pass freed up a streaking Cuadrado who evened up the match.

In the second half, Cuadrado was switched to the other side and was right in position to jump on a deflected ball for teh second goal.

Neto(6) - hung out to dry by his defense on the lone goal, only called upon to make one other save. Really didn't have a lot to do in this match.

Tomovic(5.5) - way too far forward and way too involved in the offence. Joaquin or Cuadrado should be the one crossing from the right, not the defender. He had Pasqual's delusions of granduer.
Rodriguez(5.5) - I said it last week in the comment section, this defense lunges way too much. He didn't make any sort of contact, but put himself in a position to miss next match by lunging and giving that dick Banti a chance to card him. other than that he played fantastic.
Savic(5) - completely worthless on the Chievo goal. played better in teh second half, but I'm totally worried about what napoli will do to him without Gonzalo next door.
Pasqual(5) - passes to no one, crosses into the stands, completely invisible in the first half. i dont recall one good play.

Aquilani(5) - see pasquals report card, same applies to Aquilani, complete waste of space today.
Pizarro (5.5) - didn't do a lot for me today, either. He did play a big part in killing off the match at the end, however.
Valero(6) - Valero was beat up a lot of the match and fought through it. Chippy performance. Very smart going down the stretch killing off the match.

Joaquin (5.5)  - not much for me today, either. couple of missed shots, deferred way too much to Tomovic. He needs to own that side when he's out there.
Rossi(6) - he got the first assist, but really didn't have a Rossi-like game. Will need a lot more from him on Wednesday.
Cuadrado  (8) - two goals and man of the match. Reportedly no ill effects from the knock on the second goal. We'll need him fir for the next match

subs
Matos (for Joaquin) (6) - primarily used to kill off the match, took a few hard fouls, good possession.
Vargas (for Aquilani) (5) - Brought in to kill off the match and inisisted on rash and worthless shots. he's just not very bright. yes the third goal would've killed the match as well, but rash shots from distance is just not what was necessary in that situation,.
Vecino (for Rossi) (6) - FINALLY, someone who has the slightest idea what it means to kill off a match. Sat on the ball in the corner and wasted about 2 minutes of extra time. gets graded for that alone, although he was probably instructed to do just that by the coach.


Montella(6.5) - rocky start for the squad, didn't really have them ready to go from the start. His game plan did not work at all for the first 30 minutes or so, but finally came to fruition with the first goal. Switched up the formation in the second half and again it paid dividends for the second goal. Vecino coming in to kill off the match was also genius.

Banti(1) - probably the worst ref in Serie A. i don't claim that he's biased, just inconsistant, way to quick to wave cards and never is in control of the matches he oversees. This match got way too rough, there were elbows to the head that weren't called, late lunges causing injury and several times, I seriously thought there were going to be fights. He should be relegated to Serie B.

Montella
"Cuadrado certainly has unique characteristicsas he scored from wide left in a 4-3-3 and netted on the right in a 3-5-2, so he can do almost anything."

"This was a difficult match and we fell behind early against a very organized Chievo team."

"There was a large risk that we would lose concentration after Juventus, but apart from the first ten minutes we were right in it." 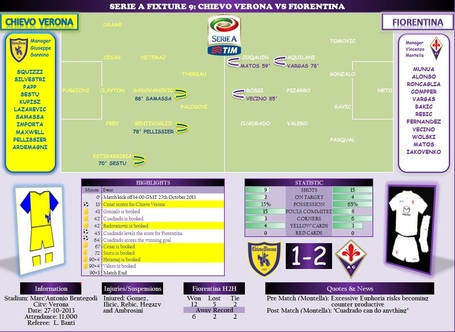 Midweek match up with Napoli. Look for Savic and Compper to play the defensive mids as Gonzalo sits out for yellow cards. The midfield will have to help out and not get caught forward, or Napoli will tear Fiorentina to shreds. This match concerns me much more than the following match at Milan.